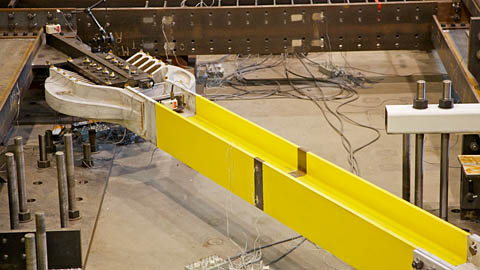 This was the first full-scale dynamic test of the “Scorpion” yielding brace system (YBS), and it went off without a hitch in a matter of seconds. A full-scale one-storey frame, laid horizontally, received the impact of the seismic loading; trembling, and with slight moaning, the frame and YBS remained intact, while undergoing significant deformations that allowed the YBS to absorb the seismic energy.

“This is the culmination of five years of work, so it’s nice to see it all come together,” said Professor Constantin Christopoulos, who supervised the project along with Professor Jeffrey Packer, both of CivE’s steel-castings research group. “To hear the industry feedback and see the excitement makes it all worth while.”

The novel, high-performance cast-steel Scorpion YBS was designed to withstand earthquake and blast loading, and is shaped like a giant wrench, placed diagonally across the frame. It is intended for use in new buildings as well as in the retrofit of older ones.

Development work on the Scorpion formed part of Michael Gray’s doctoral research, and it is now in its final stage of validation with testing on a second casting expected to be completed this month.

The Scorpion is being commercialized by Cast ConneX — an Engineering start-up firm led by alumnus Carlos de Oliveira — which plans to start marketing it immediately. The YBS can be added and removed like a fuse in existing buildings, de Oliveira explained, and it has already piqued the interest of the Canadian government—among other potential clients — for use in the fortification of embassy buildings in earthquake-prone regions such as the Indian subcontinent. Following completion of testing, a line of the Scorpion YBS will be developed for various sizes of buildings and seismic hazards.

The full-scale dynamic test on November 19th was the third for the Scorpion YBS; the previous two also simulated major earthquakes.

“Traditional seismic resistant systems are usually designed to barely survive one major earthquake, but the YBS system has undergone the equivalent of three,” said Professor Christopoulos. That there was still no cracking of the YBS’s teeth demonstrated the resilience of this new system.

The success of the first full-scale real-time dynamic test was “really exciting,” Gray remarked afterward. “It makes it worthwhile to see that my research has some practical application.”

Follow the link to read the brief in Canadian Consulting Engineer.