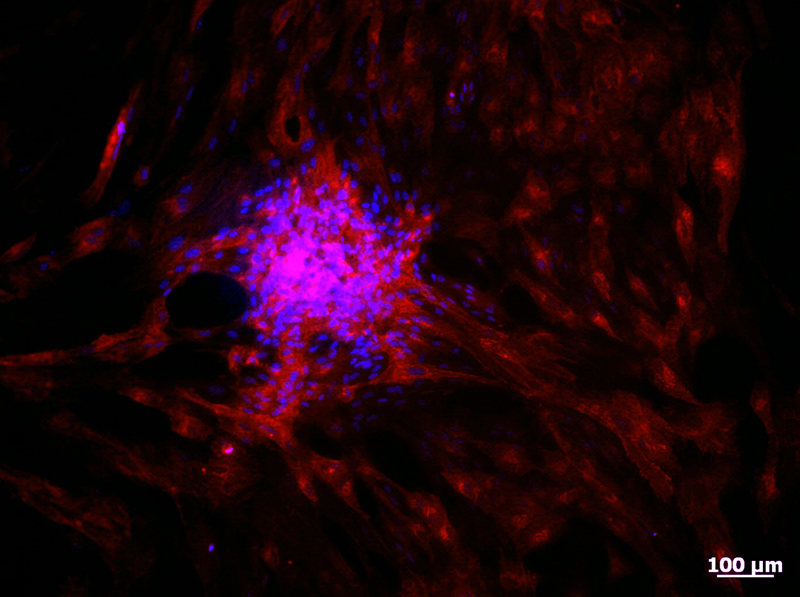 May 14, 2015
In the study, stem cell-derived photoreceptor cells were injected into the retina (pictured), leading to improved eyesight.
Human Health 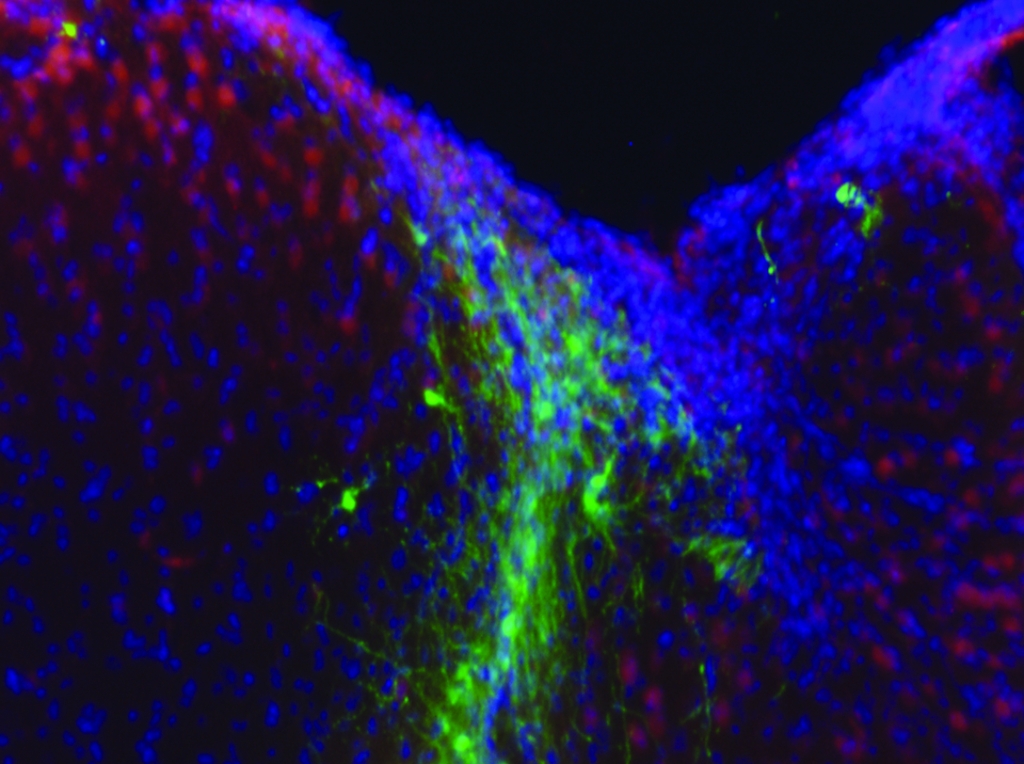 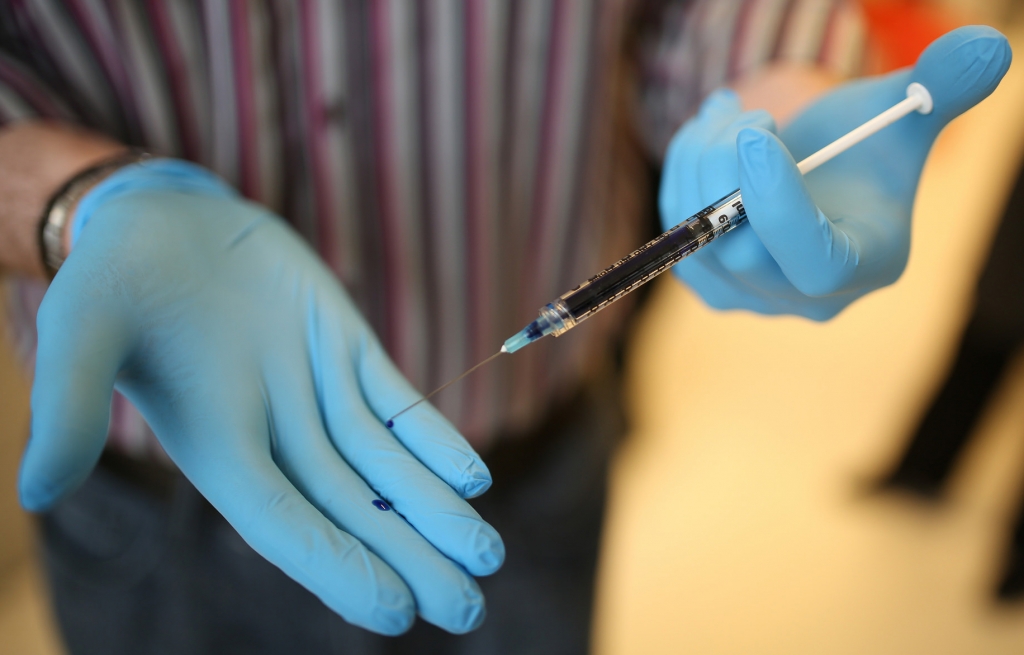 University of Toronto researchers show that engineered ‘hydrogels’ not only help with stem cell transplantation, but actually speed healing in both the eye and brain

Toronto scientists and engineers have made a breakthrough in cell transplantation using a gel-like biomaterial that keeps cells alive and helps them integrate better into tissue. In two early lab trials, this has already shown to partially reverse blindness and help the brain recover from stroke.

Led by University of Toronto professors Molly Shoichet (ChemE, IBBME) and Derek van der Kooy, together with Professor Cindi Morshead, the team encased stem cells in a hydrogel that boosted their healing abilities when transplanted into both the eye and the brain. These findings are part of an ongoing effort to develop new therapies to repair nerve damage caused by a disease or injury.

Conducted through the U of T’s Donnelly Centre for Cellular and Biomolecular Research, their research was published in today’s issue of Stem Cell Reports, the official scientific journal of the International Society for Stem Cell Research.

Stem cells hold great therapeutic promise because of their ability to turn into any cell type in the body, including their potential to generate replacement tissues and organs. While scientists are adept at growing stem cells in a lab dish, once these cells are on their own—transplanted into a desired spot in the body—they have trouble thriving. The new environment is complex and poorly understood, and implanted stem cells often die or don’t integrate properly into the surrounding tissue.

Shoichet, a bioengineer who recently won the prestigious L’Oreal-UNESCO for Women in Science Award, and her team created the hydrogel several years ago as a kind of a bubble wrap to hold cells together during transport and delivery into a transplant site.

“This study goes one step further, showing that the hydrogels do more than just hold stem cells together; they directly promote stem cell survival and integration. This brings stem-cell based therapy closer to reality” says Shoichet, whose affiliations span the Donnelly Centre, the Department of Chemical Engineering and Applied Chemistry and the Institute of Biomaterials & Biomedical Engineering at U of T.

In addition to examining how the stem cells benefit from life in hydrogels, the researchers also showed that these new cells could help restore function that was lost due to damage or disease.

One part of the Stem Cell Reports study involved the team injecting hydrogel-encapsulated photoreceptors, grown from stem cells, into the eyes of blind mice. Photoreceptors are the light sensing cells responsible for vision in the eye. With increased cell survival and integration in the stem cells, they were able to partially restore vision.

“After cell transplantation, our measurements showed that mice with previously no visual function regained approximately 15% of their pupillary response. Their eyes are beginning to detect light and respond appropriately,” says Dr. Brian Ballios, an expert in stem cell biology and regenerative medicine for retinal degenerative disease, who led this part of the study.

Ballios’ background as an engineer stimulated his interest in biomaterial-based approaches to therapy in the eye. He recently completed his MD and PhD under the supervision of Shoichet and van der Kooy, and he’ll be continuing his medical training as an ophthalmologist, hoping to apply some of his research insights in the clinic one day.

Repairing the brain after strokes

In another part of the study, Michael Cooke (ChemE, IBBME), a postdoctoral fellow in both Shoichet’s and Morshead’s labs, injected the stem cells into the brains of mice who had recently suffered strokes.

“After transplantation, within weeks we started seeing improvements in the mice’s motor coordination,” says Cooke. His team now wants to carry out similar experiments in larger animals, such as rats, who have larger brains that are better suited for behavioral tests, to further investigate how stem cell transplants can help heal a stroke injury.

Leveraging engineering techniques—such as the design and manufacture of new biomaterials—to develop new stem-cell based therapies using hydrogels has always been on Shoichet’s mind.

“I always think that in engineering our raison d’être is to advance knowledge towards translation,” says Shoichet.

Because the hydrogel could boost cell survival in two different parts of the nervous system, the eye and the brain, it could potentially be used in transplants across many different body sites. Another advantage of the hydrogel is that, once it has delivered cells to a desired place, it dissolves and is reabsorbed by the body within a few weeks.

This remarkable material has only two components—methylcellulose that forms a gel and holds the cells together, and hyaluronan, which keeps the cells alive.

“Through this physical blend of two materials we are getting the best of both worlds,” says Shoichet.