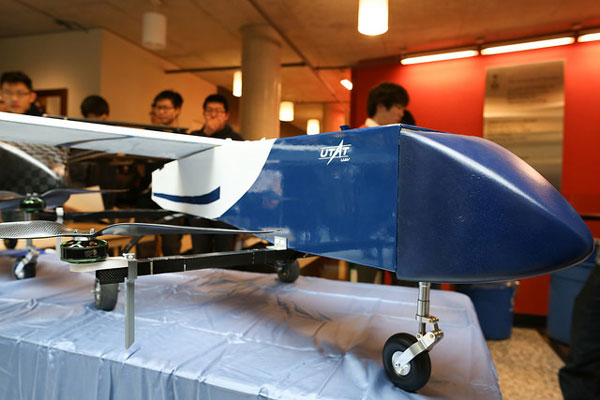 A hybrid drone with both wings and rotors, a supersonic rocket powered by laughing gas and candle wax, and a satellite smaller than a toaster that could carry microorganisms into orbit: these were just some of the innovations on display at Aerospace Showcase 2016, organized by the University of Toronto Aerospace Team (UTAT).

More than 200 people attended the event Friday in the Bahen Centre on U of T’s St. George Campus, including industrial collaborators, faculty, students and media.

“There is meaning and passion behind every piece of technology you see here today,” said Jeremy Wang (Year 3 EngSci), UTAT’s Executive Director. “One of the things this team helped me realize is that aerospace is not just about aerospace — we hope to show you its importance at a deeply personal and cultural level which is felt, but not always noticed.”

Professor Markus Bussmann, vice-dean of graduate studies at U of T Engineering, spoke to the ways that teams like UTAT enrich the engineering education experience. “Design teams give our students opportunities to foster their interests and passions, develop key engineering and professional competencies and compete against other top engineering schools at national and international events,” he said. “These learning experiences prepare them to succeed and lead in whatever they choose to do next.”

Professor Philippe Lavoie (UTIAS), who serves as faculty advisor to UTAT, recalled his own formative experiences on student design teams. “One of the lessons I learned is that when you are faced with the most difficult challenges, that’s when you’re going to be at your best and find the most innovative solutions,” he said. “It takes a lot of sacrifice, but what you get back is ten times greater.”

At the showcase, UTAT unveiled this year’s fleet of five new vehicles for the first time:

University of Toronto Explorer II (UT-XII): A fixed-wing drone similar in shape to conventional aircraft. Its body is built mostly of lightweight yet strong carbon fibre, which makes it easy to repair. It’s powered by a single propeller at the back of the plane, and equipped with multiple cameras and an on-board autopilot in the form of a computer processor. Drones like this could be used for agricultural monitoring, object recognition or emergency medical delivery. The Explorer II will be entered into three competitions this year: in April, the 2016 Student UAV Competition in Southport, Manitoba; in June, the Student Unmanned Aerial Systems Competition in Patuxent River, Maryland; and in September the UAV Challenge Medical Express Competition to be held in Dalby, Queensland, Australia. All of these competitions will challenge its ability to take off, land, and navigate itself autonomously, without the help of a ground-based pilot.

University of Toronto Explorer Vertical Take-Off and Landing (UT-XV): Similar to the Explorer II, this UAV is a hybrid aircraft that contains both fixed wing and quadrocopter features. It too is designed for surveillance and payload delivery, but its ability to take off and land without a runway allows it to access more challenging terrain. It will also be competing at the UAV Challenge Medical Express Competition in Australia.

University of Toronto Whirlybird (UTW): The Whirlybird is a quadrocopter of a type that could be used for agricultural crop surveillance,to deliver small payloads, or to assist indoor inspection such as during firefighting. The Whirlybird is designed to be lightweight and optimized for autonomous flight. The quadrocopter is equipped with a stabilized camera and programmed with algorithms that allow it to take in visual information and use it to make navigation decisions. The Whirlybird will be also be competing at the 2016 Student UAV Competition from Unmanned Systems Canada, as well as the 2016 International Micro-Air Vehicles Competition.

“HERON” Astrobiology CubeSat: This satellite is smaller than a toaster and is being built for the Canadian Satellite Design Challenge held every two years. (The current competition cycle began in September 2014 and will end this coming summer.) The HERON will carry a miniature laboratory, using tiny fluid channels and pumps to carry out a microbiology experiment with yeast that could offer insight into the gut health of astronauts.

All humans naturally carry certain species of yeast within our digestive systems, which are normally kept in check by our immune systems. However, spaceflight can weaken our natural defenses and cause the yeast to grow out of control. By observing how the yeast grow in microgravity, the team hopes to learn more about how to prevent this. Such an experiment would be very complex and require a great deal of valuable astronaut time on the International Space Station, but can be completed for a fraction of the cost in a satellite. The HERON will undergo full launch and space environmental qualification testing as part of the competition. The goal is to launch the winning satellite into orbit.

“Deliverance” Hybrid Sounding Rocket: This is high-altitude research rocket designed to compete at the Intercollegiate Rocket Engineering Competition held in June of each year in Green River, Utah. The nine-foot vessel is powered by a mixture of nitrous oxide and paraffin and can fly as fast as 1.4 times the speed of sound. It is capable carrying a ten-pound payload to a height of 23,000 feet, about the cruising altitude of a typical commercial aircraft, before deploying the payload and falling back to earth. Such rockets typically carry devices used by scientists to measure the concentration of chemical substances high in the atmosphere, but at the competition the main goal is to learn more about the art of making rockets. As Thomas Leung (Year 3 EngSci of UTAT’s rocketry division says “Rocket science is easy, it’s rocket engineering that’s hard!”