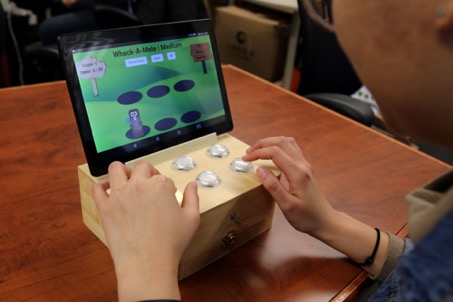 It’s all fun and brain games: Using simulations and games to improve health in older adults

More than half a million Canadians are living with dementia, and as the country’s population ages, that number is expected to nearly double in 15 years. To improve current tests that monitor cognitive health in older adults, Professor Mark Chignell (MIE) and his team have developed a more engaging approach: gaming.

“Nobody wants to do a paper and pencil test, but if you give them a game to play then it doesn’t feel like a task,” says Chignell.

With the support of AGE-WELL, and a recently received Connaught Innovation Award, Chignell and his group of researchers have developed driving simulators and games that can monitor and improve the cognitive and physical health of older adults.

“A lot of them miss driving,” says Farzad Nejatimoharrami, a postdoctoral fellow with Chignell’s lab, as he turned the wireless steering wheel connected to a monitor. The driving simulator allows the user to slowly cruise around a neighbourhood, picking up items as they go. Along the way, they can interact with timeless characters from film and television including Abbott and Costello and Dorothy from the Wizard of Oz.

The simulator system also offers 360-degree tours of cities around the world, allowing those who are unable to travel to still have those experiences. A set of pedals sitting near Nejatimoharrami’s feet can be used for a biking simulation that is only activated when the pedals are turning, encouraging physical activity as well as mental engagement.

“This game measures cognitive function,” says Thanyathorn (Smile) Thanapattheerakul (MIE MASc candidate) as she pushes buttons on a wooden box with a tablet sitting atop of it. On the screen, moles pop out of the ground and the user is tasked with clicking the button when they see a mole, but not if the mole is wearing a top hat.

“They have to figure out what is the target and what is the distractor,” says Thanapattheerakul. This game is one in Chignell’s suite of Target Acquisition Games for Measurement and Evaluation (TAG-ME) games. The score a user receives in the game will predict the scores of a traditional dementia test.  Chignell plans on making the games and simulators available to the public, as well as long term care homes and hospitals, through his start-up company Centivizer.

“We try to combine both physical and mental forms of activation,” said Chignell. “The recurring theme is to make things engaging and rewarding, so that people do what’s good for them because it’s fun to do.”