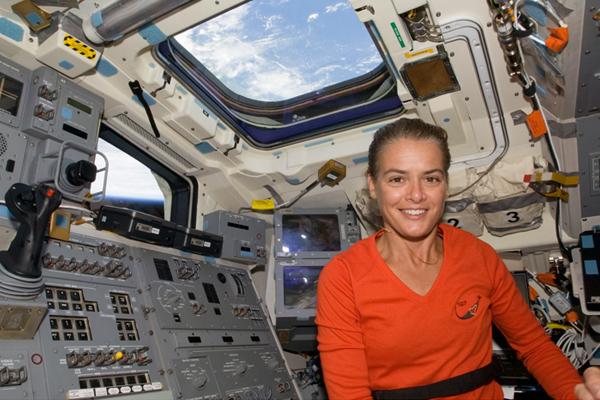 Julie Payette, astronaut and U of T Engineering alumna, named next Governor General

July 13, 2017
Julie Payette (ECE MASc 9T0) will succeed David Johnston as the next Governor General of Canada. The U of T Engineering alumna has been to space twice, and is also an accomplished athlete, singer and pianist. (Image courtesy of the Canadian Space Agency)

Former astronaut Julie Payette (ECE MASc 9T0) has been named the next Governor General of Canada, Prime Minister Justin Trudeau announced. The Governor General is the Queen’s representative in the country.

“From the first moment the idea came up of appointing Ms. Payette…it was obvious to me that she would make an extraordinary Governor General,” said Trudeau.

Payette earned a master’s degree in computer engineering in The Edward S. Rogers Sr. Department of Electrical & Computer Engineering, and received an honorary doctorate from the University in 2001.

“Julie Payette’s tremendous accomplishments transcend disciplines and borders — as an engineering researcher, pilot, musician, leader and as a woman in STEM, she is truly an inspiration to aspiring engineers across Canada and around the world,” said Cristina Amon, Dean of the Faculty of Applied Science & Engineering. “On behalf of our Faculty and the entire U of T community, I extend my heartfelt congratulations to Julie on this richly earned honour and responsibility.”

She is best known as the first Canadian to board the International Space Station in 1999 and for serving as flight engineer and lead robotic operator on the Space Shuttle Endeavour 10 years later.

Fluent in French and English, she can also speak Italian, Russian, Spanish and German, and sing in those languages — Payette was a member of the Tafelmusik Baroque Orchestra Choir from 1989 to 1992.

Payette obtained an International Baccalaureate at the United World College of the Atlantic in Wales in 1982 and a BEng degree in electrical engineering from McGill University before joining U of T for her graduate studies. She was co-supervised by Professors Michael Stumm, in The Edward S. Rogers Sr. Department of Electrical & Engineering, and Graeme Hirst, in the Department of Computer Science.

Payette later invited Stumm to the launch of one of her shuttle missions, from NASA’s Kennedy Space Centre in Florida. “It was one of the delights of my life,” Stumm told the CBC. “She’s a stupendous person.”

“Once I completed my Master’s degree from the University of Toronto I was ready to tackle professional jobs,” Payette said in a 2013 interview.

“Engineering is extremely useful for being an astronaut because it’s extremely applied,” she told U of T Magazine. “What engineering teaches you in particular is to look at a problem, analyze that problem, look at what you’ve got available to solve that problem or to improve a system or to repair something or to design something new.

“That’s exactly what we do in space. You need to be able to repair things and design new things, and you certainly have to have an inclination to look at a problem and try to solve it. Operational, we call it. So if you don’t like that stuff, don’t go into the astronaut business. It’s all we do.”

Payette decided to become an astronaut after watching Apollo missions to the Moon at school in Montreal.

“I’m nine years old, I’m sitting down on the floor of a gym and I’m watching astronauts walking on the moon,” she recalled in an interview with U of T Magazine. “I don’t speak English. I’m a Canadian girl… I had never been in an airplane… and I thought this is so cool I wanted to do the same.”

“It didn’t matter to me that I was the wrong nationality, the wrong gender and spoke the wrong language. It didn’t cross my mind that this was a bit of a far-fetched goal because when you’re nine years, you don’t think of those things.”

Named public policy scholar at the Woodrow Wilson Center in Washington, D.C. in 2011, Payette has also been appointed scientific delegate to the United States for the Quebec Government. She was appointed an Officer of the Order of Canada, one of the country’s highest civilian honours, in 2010.

“Julie Payette is an absolutely brilliant choice for Canada’s next Governor General,” said U of T president Meric Gertler. “The U of T community is already incredibly proud to call her an alumna, and so excited to see her take on this crucial role in the life of our country.”