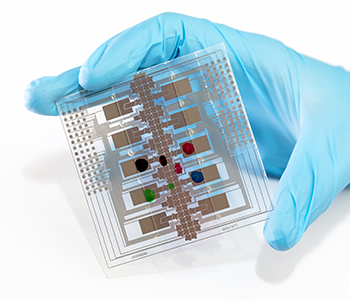 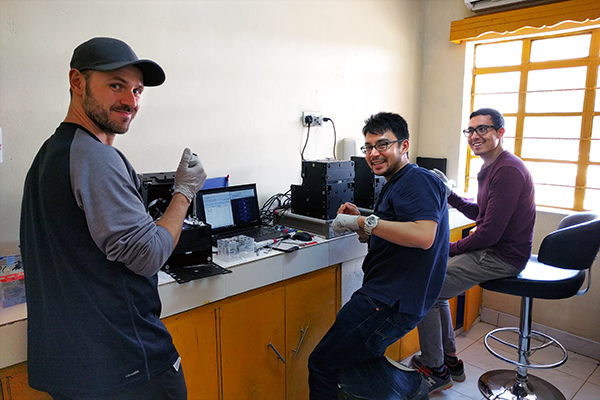 For millions of displaced people around the world — many of them refugees, living in temporary shelters under crowded conditions — an outbreak of disease is devastating. Each year, the measles virus kills more than 134,000 people globally, and another 100,000 children are born with defects caused by congenital rubella syndrome. Both diseases are preventable by vaccination.

Now, a team of researchers from the University of Toronto, including alumni Alphonsus Ng (IBBME PhD 1T5) and Ryan Fobel (IBBME PhD 1T6), has applied a hacker mentality to developing a portable, reconfigurable lab-on-a-chip diagnostic platform and field-tested the system in remote Kenya. Their validated platform can gauge the level of immunity to vaccine-preventable diseases among vulnerable populations. Their work appears today in the journal Science Translational Medicine.

“We found that our low-cost device matched the international laboratory-standard reference tests of the Kenyan Medical Research Institute for 86 per cent of measles samples, and 91 per cent of rubella samples,” says Darius Rackus, one of the lead authors of the paper.

These results underscore their platform’s potential to help identify populations susceptible to epidemics in remote or under-resourced locations.

“Our platform is inexpensive, fast and flexible — there’s nothing like it out there,” says Rackus. “We see it as a powerful tool for public health workers on the front lines, who have no access to health records, or may be dealing with humanitarian emergencies.”

Rackus and his team, led by Professor Aaron Wheeler (Chemistry, IBBME), are world leaders in the area of digital microfluidics, a technique used to move, split, recombine and mix miniscule droplets of liquid all on a tiny ‘chip.’ The chips are made using low-cost fabrication techniques such as ink-jet and 3D printing, and the droplets are controlled by applying electrical signals to different electrodes.

In June 2016 four members of the Wheeler Lab travelled to the Kakuma refugee camp in northwestern Kenya to validate their platform, dubbed the MR Box — a desktop lab the size of a toaster oven configured to test for measles and rubella.

Hacking healthcare in a refugee camp: Read more about the team’s time in Kenya

They arrived in Kakuma following a massive public-health immunization campaign and tested hundreds of children and their caregivers for the presence of molecular markers indicating disease immunity. They then sent their samples to the Kenyan Medical Research Institute national laboratory in Nairobi for validation.

“For the first time taking digital microfluidics out of the lab, this is phenomenal result,” says Julian Lamanna, one of the paper’s authors and a member of the team who was on the ground in Kakuma. “In future, with simple statistical analyses our point-of-care system could be used to monitor the levels of immunity within dynamic populations, helping prevent outbreaks before they happen.”

“If you could distribute these devices at airports or points of entry around the world, they could become a powerful tool for disease surveillance and monitoring,” adds Rackus. “They also have the potential to significantly reduce the burden on expensive and sophisticated diagnostic labs that currently do all these epidemiological tests.”

Since the trip to Kakuma, the team has taken MR Boxes for additional testing in the Democratic Republic of the Congo. They are also developing new chips to test for different markers and diseases, including zika and malaria.

“What we’ve demonstrated is a universal platform — our microfluidic chips are relatively generic, and highly customizable,” says Wheeler, whose lab is housed in U of T’s Donnelly Centre. “Now that we’ve seen how practical it is in the field, we want to adapt it to as many diseases and environmental conditions as we can.”