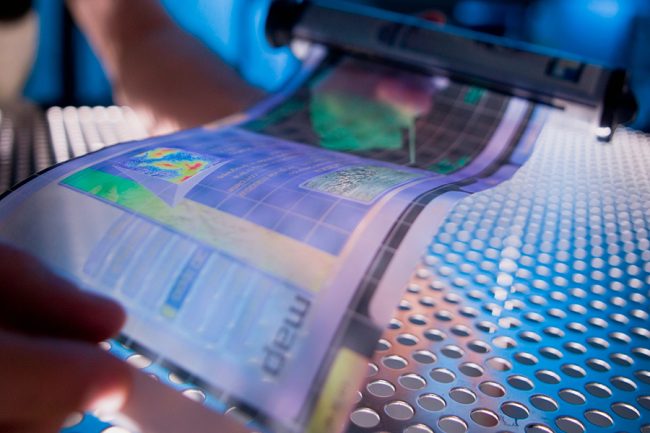 Manufacturers of consumer electronics dream of making their products thinner, lighter and more flexible — but a new study is sounding a note of caution about some of the materials a lot of them are pinning their hopes on.

The study represents the first large-scale survey of fracture strength and fatigue lifetime for a family of materials known as transitional metal dichalcogenides, or TMDs.

“TMDs are attractive because of their electronic properties: they act as semiconductors in a very similar way to silicon, which is the gold standard for microchips today,” says Professor Tobin Filleter (MIE), final author on a new paper published today in Matter.

“Unlike silicon, TMDs are what we call a two-dimensional material, which means that it’s very easy to form them into sheets that are only a few atoms thick. In theory, that could mean thinner electronics. But until our study, we didn’t know much about some of their other properties, such as fracture strength or mechanical fatigue.”

Fracture strength refers to the maximum stress that a material can take before breaking, while fatigue describes its behaviour under lower stresses that are either sustained or repeated many times. If TMDs are to be used in flexible, wearable devices, they will need to be resilient to both.

Having previously studied the mechanical fatigue of graphene, another two-dimensional material, Filleter and his team decided to use a similar approach for TMDs.

Working collaboratively with teams at the University of Tokyo and Rice University, they obtained samples of two different TMD materials: molybdenum sulfide (MoS2) and tungsten selenide (WSe2). In both cases, the samples were less than one nanometre thick, representing only three layers of atoms.

In the lab, they stretched these sheets over a piece of silicon etched with thousands of holes — each only a few micrometres in diameter, like an array of microscopic drumheads. They then used an atomic force microscope with a diamond-tipped probe to push on the centre of each hole.

Fracture strength was measured by increasing the force until the TMD sheets snapped, while fatigue was assessed using a lower force — typically 50-90% of the fracture strength — and then either keeping it there for hours to test static fatigue, or repeating the stress cycle millions of times to test dynamic fatigue.

While there had been a handful of previous attempts to measure facture strength for TMDs, they were based on a relatively small number of samples. The new approach allows for a greatly increased sample size, which the team expected would help them zero in on the true value. To their surprise, the numbers were all over the map.

“For example, with fracture strength, the TMD over one hole might break under less than half of the stress than the one next to it. Under fatigue, one might last for more than 10,000 seconds but the next may not even last one second.”

As an analogy, Cui’s statistical analysis showed that the variability of fracture strength and fatigue lifetime were about on par with typical measurements for glass or ceramics.

“Imagine dropping a plate or drinking glass on a hard kitchen floor. Depending on how it lands, it might break, or it might not. That’s sort of where we are with TMDs right now.”

“The cause of this unpredictability is likely defects within the crystal structure of the individual TMD sheets,” says Dr. Sankha Mukherjee, the other co-lead author. Mukherjee is a former postdoctoral fellow at U of T Engineering, now an assistant professor at Indian Institute of Technology, Kharagpur.

Mukherjee performed molecular simulations to reveal the strong effect of defects on the reliability of TMDs. Eliminating these defects won’t be easy, but it won’t be unprecedented either: a similar issue is faced by silicon chip manufacturers today.

“All the raw silicon wafers have some type of defect, and many can’t be made into microchips,” says Filleter. “Chip makers know this, and they have integrated sophisticated quality control checks into their manufacturing processes to deal with it. We demonstrate that a similar approach can be applied to TMDs as well.”

“Like graphene, TMDs might be attractive for their two-dimensional nature, but our study shows that you still need to worry about defects, and to find those, you need rigorous mechanical testing.”