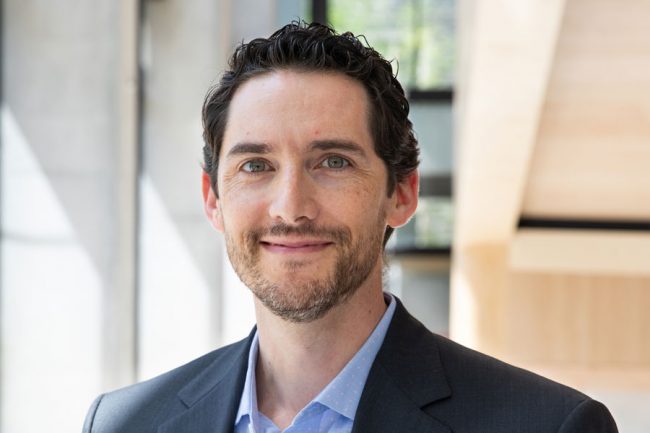 May 7, 2020
Professor Micah Stickel (ECE) has been named the next Acting Vice Provost, Students for the University of Toronto. (Photo: Laura Pedersen)

Professor Micah Stickel (ECE) has been named as the next Acting Vice Provost, Students for the University of Toronto.

He will assume the position on October 1, 2020, replacing Professor Sandy Welsh for a six-month term. Before and after this term, he will serve as a Vice-Provostial Advisor on Students, a role which begins July 1, 2020.

“I am honoured to have been selected for this role,” said Stickel. “To me personally, there is nothing more important than giving each one of our students the opportunity to find a positive and inclusive experience at U of T. I am excited to support and enhance the thriving campus life that makes the years here unforgettable.”

Stickel is a triple graduate of U of T, having completed his BASc, MASc, and PhD degrees in The Edward S. Rogers Sr. Department of Electrical and Computer Engineering. His graduate research focused on electromagnetics and the development of novel devices for high-frequency wireless systems.

Since becoming a teaching-stream professor in 2007, Stickel has become well known among students and faculty alike for his passion for adopting innovative approaches to engineering education and integrating the use of technology in the classroom. He is a pioneer of the “inverted classroom” approach — which uses online videos to introduce new material, freeing up for class time for collaboration and active learning — and is engaged in scholarly work to quantify the impact of new technologies in teaching. He was appointed as the Faculty’s Chair, First-Year in 2012, a position which became Vice-Dean, First Year in 2017.

As Vice-Dean, Stickel has undertaken a number of major initiatives and reviews to further strengthen the student experience and academic excellence of the core first year programs within U of T Engineering. He is also responsible for the Engineering Student Outreach Office, which offers innovative outreach programming that includes a focus on members of groups that are underrepresented in engineering.

Stickel also oversees the Faculty’s Engineering Student Recruitment and Retention Office, and leads and coordinates its Broad-Based Admissions Project and Assessment, which aims to expand the criteria upon which undergraduate admissions decisions are based. Stickel also co-created and continues to co-chair the Engineering Equity, Diversity, and Inclusion (EDI) Action Group, a group of students, staff, and faculty that meets weekly to discuss issues, experiences, and initiatives related to EDI and how to improve the student experience within U of T Engineering.

Stickel has been honoured with five departmental teaching awards and was selected as a New Faculty Fellow at the 2008 Frontiers in Education Conference. In 2012, he was awarded the Early Career Teaching Award by the Faculty of Applied Science & Engineering. In 2014 the American Society for Engineering Education named him one of their Top 20 Under 40.  In 2017, he was awarded one of the inaugural Hart Teaching Innovation Professorships to support his research related to active teaching and learning.

“I have seen first-hand the positive changes engendered by Professor Stickel’s thoughtful, compassionate leadership over many years,” said Chris Yip, dean of the Faculty of Applied Science & Engineering. “It’s impossible to overstate the impact of his efforts to support our students, from driving the introduction of our current Broad-Based Admissions strategy, to his enormous dedication to advancing equity, diversity and inclusion in our Faculty.

“Both before and since becoming dean I have been continually inspired by the many ways he puts students first, most recently during the transition to online learning during this pandemic — I know he will accomplish great things in his new role.”