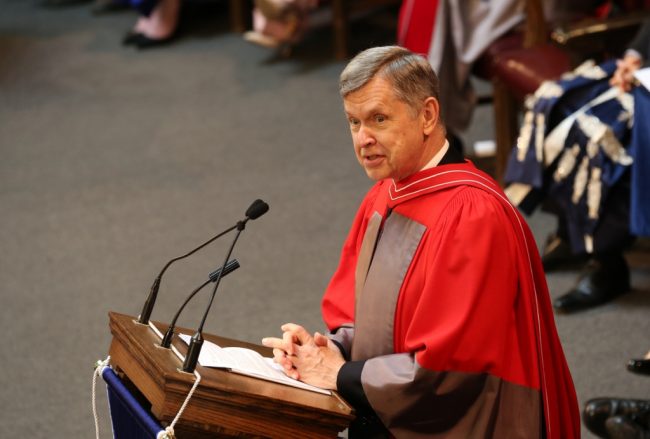 March 31, 2021
Alumnus Alfred Aho (pictured here in 2015 receiving his honorary degree at U of T) and collaborator Jeffrey Ullman have been named 2020 AM Turing Award recipients. (Photo: Roberta Baker)

U of T Engineering alumnus Alfred Aho (EngPhys 6T3), alongside collaborator Jeffrey Ullman, has received the 2020 A.M. Turing Award — widely considered the Nobel Prize of computing — for their influential work in algorithms and compilers.

The award is named after mathematician and computer scientist Alan M. Turing, who articulated the mathematical foundation and limits of computing. It carries a $1-million prize with financial support provided by Google Inc.

In the late 1960s, Aho and Ullman were key members of research centre Bell Labs. There, they helped create the compiler, a crucial tool that takes in software programs written by humans and turns them into language that computers can understand. Their pattern-matching algorithms are run daily on computers around the world today, while their textbooks on algorithms and compilers have been used to educate generations of software engineers.

Aho is currently appointed the Lawrence Gussman Professor Emeritus of Computer Science at Columbia University. His honours include the IEEE John von Neumann Medal and the NEC C&C Foundation C&C Prize. He is also a member of the U.S National Academy of Engineering, the American Academy of Arts and Sciences, and the Royal Society of Canada. He is a Fellow of ACM, IEEE, Bell Labs, and the American Association for the Advancement of Science. In 2015, Aho received an honorary degree from the University of Toronto, and in 2018, he was inducted into the Engineering Alumni Hall of Distinction at the Engineering Alumni Network Awards.

“The software researchers develop today would not be possible without the fundamental work of Alfred Aho and Jeffrey Ullman. They helped define the modern programming industry, and therefore shaped the very world around us,” says Chris Yip, Dean of U of T Engineering. “On behalf of U of T Engineering, my enthusiastic congratulations on this incredibly prestigious recognition. We have long been tremendously proud to call Professor Aho a U of T Engineering alumnus.”