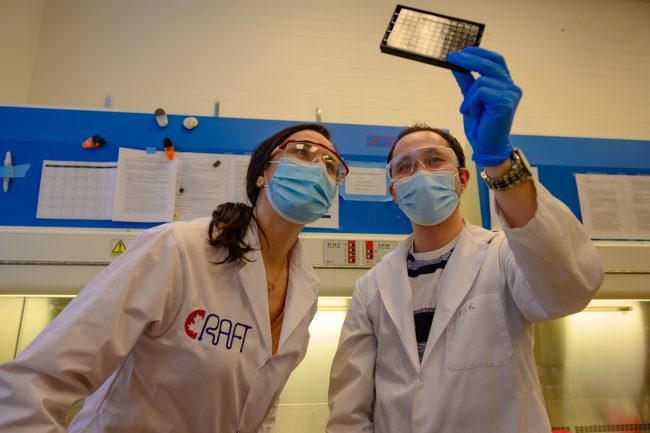 Using their novel organ-on-a-chip platform, a U of T Engineering research team has identified a molecule with the potential to combat one of the most severe complications of COVID-19 infections.

The molecule, a novel anti-inflammatory peptide called QHREDGS, does not act on the virus directly. Instead, it works to prevent a potentially life-threatening immune reaction known as a cytokine storm.

Cytokine storms are known to occur in some patients with COVID-19, as well as other illnesses. They happen when the body releases a large number of signalling proteins called cytokines in the blood. Too many cytokines push the immune system into overdrive, and can lead to vascular complications, multi-organ failure and even death.

One of the greatest challenges for clinicians during the COVID-19 pandemic has been understanding why some people infected by the SARS-CoV-2 virus experience cytokine storms, while others do not.

Researchers in U of T Engineering’s Centre for Research and Applications in Fluidic Technologies (CRAFT), co-led by Professor Milica Radisic (BME, ChemE),  are leveraging their expertise in organ-on-a-chip technology to study the problem.

“Human cell-based organ-on-a-chip systems have a unique advantage of enabling us to dissect complex processes by simplifying the system and strategically introducing various immune cell types to understand the cascade of events better,” says Radisic.

Radisic and her team are experts in growing functional cardiac tissue outside the human body. These lab-grown tissues allow researchers to model diseases and understand how genetic mutations in cardiac tissues can cause cardiac failures.

“During the pandemic, we repurposed our cardiac tissue platforms to understand how the SARS-CoV-2 virus can cause vascular dysfunction,” says Rick Lu (BME PhD candidate).

In a recent paper published in the journal Lab on a Chip, Lu and his co-authors demonstrated how they carried out the study using a specific model tissue platform known as integrated vasculature for assessing dynamic events (InVADE) — an investigation that was supported by U of T’s Connaught Fund, the Toronto Innovation Acceleration Partners, and a donor to the University.

Using the InVADE platform, they infected a microfabricated perfusable blood vessel-on-a-chip with SARS-CoV-2 to understand how the virus triggers inflammation and vascular dysfunction.

They also screened five compounds with anti-inflammatory properties that had been previously tested by clinicians to see if any of them showed promise in preventing the cytokine storm.

QHREDGS is a peptide which had previously been found to improve cardiomyocyte metabolism and enhance endothelial cell survival. In the study, Lu found that it enhanced vascular functions and repaired the harmful effects of SARS-CoV-2. For example, the function of a vascular structure known as the endothelial barrier was improved by 62% compared with endothelial cells without the peptide, and the secretion of some cytokine storm molecules had been decreased between 1,000-10,000-fold.

“Vascular dysfunction can allow SARS-CoV-2 to penetrate into a person’s organs, such as the heart, liver and intestine,” says Lu. “By improving vascular function and reducing inflammation in the body, we hope to prevent the kind of organ failure that has been seen in COVID-19 patients.”

The InVADE platform is being used for many other investigations in Radisic’s lab, including a study into why cancer is very rarely found in the heart. Lu and his colleagues are also using the vasculature-on-a-chip system to better understand the causes of myocarditis that have been seen in COVID-19 patients, as well as in some individuals who have been vaccinated against the disease.

The team is currently collaborating with clinicians and researchers across Toronto to find unique biomolecular markers associated with myocarditis.

“We’re currently using some of the innate immune system, namely the peripheral blood mononuclear cells (PBMC) and neutrophils, to see how those immune cells can cross-talk with cardiac tissue to understand how they affect the cardiac tissue function,” says Lu.

“We’re really excited about this because not only will we be able to identify some of the molecular pathways associated with myocarditis, but we also hope to find potential therapeutics to reverse this inflammation in the heart.”

Radisic hopes this type of organ-on-a-chip system will enable researchers to predict and better respond to future public health events.

“Besides eliminating animal studies and keeping the participants in clinical studies safe, their small scale also enables us to be efficient in reagent use, as well as safe by minimizing the amount of virus that is needed to carry out the experiments,” she says.

“This technology can enable quick and efficient studies of emerging pathogens and their potential to infect and impair function of various human organs.”