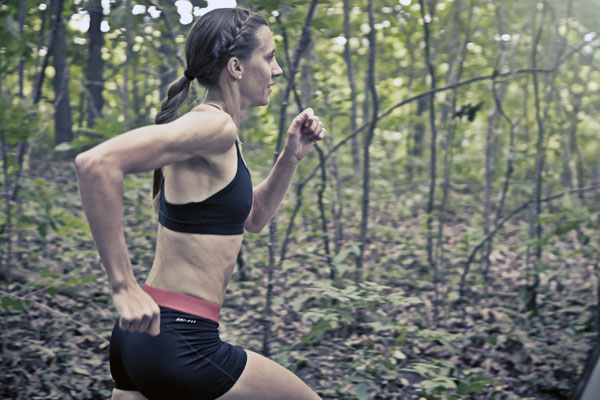 Pan Am/Parapan Am Games: this Engineering PhD student is ranked sixth in the world for the 1000m

Sasha Gollish (CivE MEng 1T0, EngEd PhD Candidate) is not a superstitious person. But when she had to run a 1000-metre race on  Friday the 13th this past February, the Pan Am hopeful was not feeling particularly inspired.

“I said to my coaches, Ross Ristuccia and Carl Georgevski, ‘I don’t feel well. I feel so heavy and slow.'”

With a little coaxing, Gollish laced up for the race at the Spire Invitational meet, and then delivered the 2014-15 performance she’s most proud of: a time of 2:39.70. This set a meet record and ranked her sixth in the world.

This remarkable time was just one of a series of other standout finishes that helped to take the Blues women’s track team to the top of the CIS podium and earned Gollish the titles of both the CIS Female Track and Field Athlete of the Year and U of T Female Athlete of the Year for 2015.

“Sasha Gollish is a genuinely home grown University of Toronto developed student-athlete,” said Georgevski. “She started in our junior development track program back in 1996 and was rookie of the year as a first-year U of T student athlete in 2000.”

Gollish stands out among past winners of the athlete of the year honour because of the multiple and complex and demands she’s met while racing.

“I am an engineer by trade. The foundation of undergrad is learning how to multitask,” she said. “I can work well this way.”

She not only works well, but thrives with a full plate. A PhD student, Gollish works as an engineering consultant while studying engineering education at U of T – and is racing against students who are often 10 to 15 years her junior.

“Sasha is an extremely bright, talented and compassionate woman,” Georgevski said. “From a coach’s perspective she is the total package—a fierce competitor on the track and a true teammate and leader off the track.”

“They keep me young,” the 33-year old said of her teammates, with a light-hearted laugh. “Things have changed between when I first competed and now—what matters most to me is different.”

Over the years Gollish has fine-tuned what brings out her optimal performances. For example, her school work and sessions at the gym suffer without adequate sleep, so she won’t compromise on that; she is also very mindful of her diet. And beyond that, she’s able to manage expectations and stress better.

“My perspective is different,” she explained. “If I have a bad work out, for example, I get over it really quickly. Before, it would eat me up for a couple of days. I appreciate that I have more wisdom now.”

Georgevski is confident that her experience and skills will take her to the next level. “Here we are in 2015 and it’s already been a big year; she is the CIS Female Track and Field Athlete of the Year, U of T Female Athlete of the Year and we’re not done yet. We still have the Pan Am Games in her sights.”

Gollish is currently in California racing to quality for the Toronto 2015 Pan Am/Parapan Am Games and the World Championships. Like her track and field peers, she will know if she makes the cut in late June. For updates, check out her website. You can also watch Gollish featured as CityNews Athlete of the Week for April 6.