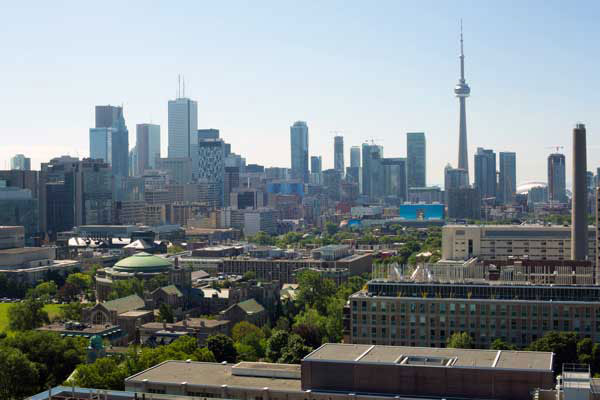 The University of Toronto can help the world meet the climate change challenge by undertaking targeted and principled divestment from specific companies in the fossil fuels industry, according to a presidential advisory committee headed by environmental engineering professor Bryan Karney (CivE).

The committee, after a year of consultations with the university community, financial and environmental experts, and others, presented its consensus report to U of T President Meric Gertler this week.

“Climate change is one of the most pressing issues of our time, matched in its urgency only by its complexity,” Gertler said. “The divestment committee tackled its mandate with the same intellectual energy and integrity that so distinguishes our academic community and I wish to thank them personally for their efforts on my behalf and on behalf of the entire University of Toronto.”

Karney said the committee is recommending a targeted rather than a blanket approach to divestment because some fossil fuels still offer society indispensable benefits that currently cannot be gained through other sources. However, certain fossil fuel companies “engage in egregious behaviour and contribute inordinately to social injury,” he said. “These are the companies whose actions blatantly disregard the international effort to limit the rise in average global temperatures above the 1.5-degree threshold set at the recent COP21 conference in Paris. In our view, such companies are properly the focus of divestment action.”

The committee recommends U of T determine a method to evaluate whether a given fossil fuels company’s actions blatantly disregard the 1.5-degree threshold. Once that method is determined, the university should instruct its investment managers to divest immediately any direct holdings in such companies.

Divestment is only one way U of T can help lead efforts to meet the climate change challenge, according to the report. “Divestment should be placed within the larger context of the university’s most valuable and effective contributions to the global effort to avert, mitigate, or meet the worst consequences of climate change. These contributions flow first and foremost from the university’s fundamental role as an academic community,” especially its teaching and research, the report says.

Karney said U of T’s investment holdings aren’t large enough to have a direct impact on the fossil fuel industry, but the committee called on the university to make an impact by investing in two new funds. One would be targeted at building on the university’s academic strength in research, education and entrepreneurship related to climate change. The other would build on what the committee calls ‘the university’s strong work’ in operational sustainability.

Gertler struck the advisory committee in November of 2014 after Toronto350.org, a student-led group, submitted a petition under the terms of the University’s Policy on Social and Political Issues With Respect to University Divestment, calling on the university to “fully divest from fossil fuel companies within the next five years” and to immediately stop investing any new money in the industry. The committee of 10 included faculty members from law, medical biophysics, philosophy, economics, political science and earth sciences, as well as student, staff and alumni representatives.

Gertler said the process of reviewing the report and its recommendations will begin immediately. “I will conduct due diligence as appropriate, and I will respond to the report sometime in the new year. In the meantime, I hope and expect that the report will draw attention and close study across our broad community.”

The committee met with a wide range of groups and individuals from within and outside the university, including Toronto350.org, students, faculty, staff and financial experts.