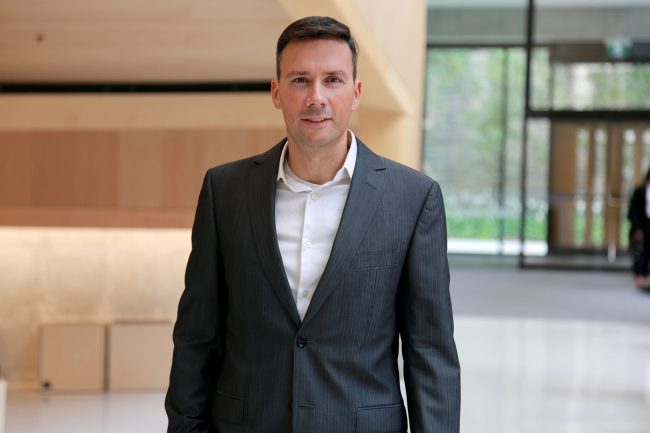 September 6, 2022
Professor David Sinton (MIE) is regarded as a pioneer in the area of microfluidics for energy applications. (Photo: Pam Walls)
Sustainability

Professor David Sinton (MIE) has been elected a 2022 fellow of the Royal Society of Canada (RSC). The RSC’s mission is to advance knowledge, encourage integrated interdisciplinary understanding and address issues that are critical to Canada and Canadians. Fellowship in the RSC is one of the highest honours a Canadian scholar can achieve.

Sinton is a leading expert in the area of microfluidics for energy applications. Prior to his work, microfluidics — the study and application of fluids at the microscale — had primarily been applied in health care. By applying microfluidics to water transport, he developed a new class of microfluidic fuel cells with record performance. Sinton is also known for recognizing the potential for microfluidics to improve methods for storing carbon dioxide underground; he led a nationwide research effort resulting in significant advances in carbon sequestration methods.

In more recent work, Sinton, in partnership with Professor Ted Sargent (ECE), has focused on converting CO2 into renewable products. In 2020, the research group were finalists in the $20 million global NRG COSIA Carbon XPRIZE Competition. The team developed an innovative method to leverage electrochemistry to convert carbon into economically valuable products. The project included a demonstration-scale facility built at a scale 1,000 times larger than conventional units, and the technology is currently being commercialized through the startup CERT Systems Inc.

A related technology recently won an award from the XPRIZE Carbon Removal, including $250,000 in seed funding provided by the Musk Foundation.

Sinton is co-founder and CTO of Interface Fluidics Ltd., a startup focused on improving the environmental and economic performance of energy operations. He has held several leadership roles, including interim vice-dean, research at U of T Engineering and editor-in-chief of the CSME Bulletin, the Canadian Society for Mechanical Engineering’s flagship publication. He currently serves as academic lead for U of T’s Climate Positive Energy Initiative which seeks to harness the University’s expertise to develop clean-energy solutions.

Sinton is a fellow of CSME, American Society of Mechanical Engineers, Engineering Institute of Canada, Canadian Academy of Engineering, and the American Association for the Advancement of Science. He was an NSERC E.W.R. Steacie Memorial Fellow and was elected to the RSC College of New Scholars, Artists and Scientists in 2015. He is currently the Canada Research Chair in Microfluidics and Energy.

“Professor Sinton’s groundbreaking work in microfluidics for energy applications has moved us closer to the goal of net-zero energy generation, especially for industrial processes,” says Christopher Yip, Dean of the Faculty of Applied Science & Engineering. “On behalf of the Faculty, my warmest congratulations on this well-deserved recognition.”