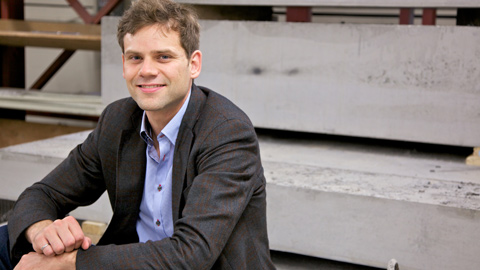 Or rather, it was the novel approach to keeping buildings structurally sound after the earth moves that was key.

Montgomery, who recently completed his PhD in Civil Engineering, was recognized for his proposal to commercialize the research conducted during his graduate studies into a new product for the marketplace. More than mere words, Montgomery has established a new company — Kinetica Dynamics — along with his graduate supervisor, Professor Constantin Christopoulos.

“It is a considerable new challenge,” Montgomery says about starting a new company. “I am not just the researcher anymore, but I am now also a salesman, a marketer, an accountant, of course, an engineer. There are a lot of new skills I am developing,” he adds.

At the heart of the company is a novel design technique for high-rise buildings.

Tall buildings will naturally sway throughout the day because of wind or because of movements in the earth. These subtle movements are less perceptible when you are close to the ground. However, taller buildings amplify these movements. For people occupying higher floors, motion sickness is a serious problem unless a damping device is deployed to control the building’s swaying. This becomes all the more important in the event of an earthquake, which can cause damage to structures.

Previous efforts to dampen sway have consisted of making a building as heavy as possible or as rigid as possible. However, both of these approaches reduce the amount of usable space available in the building and add significantly to its construction costs, and both solutions do not prevent damage to buildings caused by earthquakes.

The University of Toronto team’s solution is to replace some of the building’s coupling beams, which are common features that connect structural elements of the building, with their Wind-Earthquake Coupling Damper. Montgomery and Christopoulos’s damper is effectively a series of interlaced steel plates that are connected by a high-damping rubber that absorbs both wind and earthquake vibrations.

“This is what we call game-changing technology,” exclaims Professor Christopoulos, who notes that it is not just important for earthquake-prone zones, but is needed for any new high-rise construction.

“There was a recent study released that showed that Toronto is currently the world leader in high-rise construction. So it’s nice that not only can we offer this technology to the world, but we can also benefit from it here at home,” Professor Christopoulos states.

“The Faculty is extremely proud of Michael’s extraordinary achievements,” says Professor Cristina Amon, Dean of the Faculty of Applied Science & Engineering. “His success demonstrates the remarkable ability of our graduates to develop their research into innovative solutions to important problems.”

Montgomery, who received the $10,000 prize at an awards ceremony in Ottawa on October 17, is gratified for the recognition but notes that many more challenges lie ahead.

“I certainly feel encouraged by receiving this award, but now the hard work begins, convincing industry insiders the merits of the technology and hopefully incorporating this in some of the most ambitious projects in the world,” he states.

The Innovation Challenge Award was launched in 2004 by NSERC and the Canadian Science and Technology Growth Fund (CSTGF). The program is currently sponsored by the Business Development Bank of Canada (BDC) and NSERC. 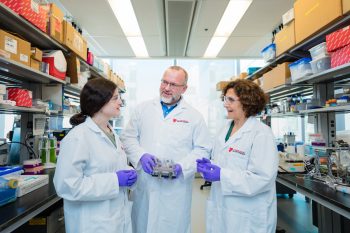