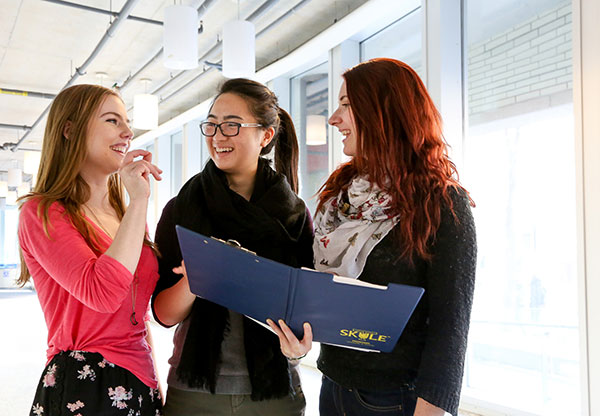 January 28, 2015
From left: Julia Filiplic, Christine Bui and Molly Gorman are among the 30.6 per cent of first-year engineering students at U of T who are female — the highest percentage in Ontario (Photo: Roberta Baker).

Women now account for 30.6 per cent of first-year students in U of T Engineering programs: a record for the Faculty and a number that surpasses all other Ontario universities. It is the only engineering school in Ontario with female first-year enrolment of more than 30 per cent. National figures are expected later this year from Engineers Canada.

“U of T Engineering is a rich environment for talented, bright women to become engineering leaders,” said Dean Cristina Amon. “Diverse perspectives are the foundation of our culture of excellence in research, education, service and innovation. This achievement is encouraging as we continue our proactive efforts to foster diversity within the Faculty, among universities and across the engineering profession.”

Today, one quarter (25.8 per cent) of U of T Engineering’s undergraduate population is female, compared to a province-wide average of 19.7 per cent. Across Canada and the United States last year, those averages were 18.9 per cent and 19.9 per cent respectively. The Faculty’s targeted recruitment efforts have been successful, with female undergraduate enrolment up from 21.3 per cent just six years ago, alongside rising entrance grade averages for first-year students that reached a record 92.4 per cent this year.

“It’s exhilarating to be part of such a diverse and talented student community,” said Teresa Nguyen (CivE 1T4 + PEY), a fourth-year civil engineering student and president of the Faculty’s Engineering Society (which elected its first female president in 1975). “At U of T Engineering, it doesn’t matter what your background is—it’s about the ideas, expertise and reasoning you bring to the table.”

“My experience at U of T Engineering has been even better than I expected,” said Molly Gorman (ChemE 1T8), a first-year chemical engineering student who’s eyed U of T since before she started high school. “It’s incredible being a part of Canada’s best engineering school—and living in a city filled with so many opportunities!”

As a leader in engineering education and research, U of T Engineering continues to attract world-class faculty. The complement of female faculty members has more than doubled in the past eight years, from 21 in 2006 to 44 in 2014. Seventeen per cent of faculty members are women, which is three points higher than the Ontario average (14 per cent) and four points higher than the Canadian average (13 per cent).

These numbers are expected to grow in the years ahead, as early-career faculty members move up in the academic ranks. More than a quarter (27.8 per cent) of U of T Engineering’s associate professors (early-career, tenure-stream faculty members) are now women, compared to an Ontario average of 15 per cent and a national average of 15.7 per cent.

“Engineering has changed significantly from when I began at U of T several decades ago,” said Professor Susan McCahan (MIE), U of T’s new vice-provost, innovations in undergraduate education, who was the University’s first female faculty member in mechanical engineering. “It is increasingly recognized as a vibrant and innovative profession: one that encourages broad perspectives and collaboration to drive positive changes that improve our world.”

“Amidst the increasing numbers of women entering Engineering programs, there is more work to be done in attracting women to the diverse and rewarding field of engineering,” said Dean Amon. “We have re-imagined engineering education by introducing program innovations, new resources for students and outreach activities to continue to attract an even more diverse range of applicants, including women.”

As of 2013, women accounted for just 11.7 per cent of all professional engineers in Canada. Growing numbers of female engineering students signal a promising future for gender balance in the profession.

U of T Engineering offers many outreach programs that aim to inspire girls and young women. In 2015, more than 560 female participants and 20 female instructors will take part in the following programs: 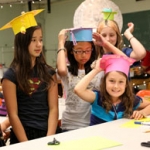 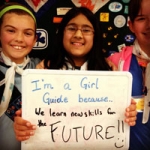 U of T Girl Guide Badge Day
For Girl Guides in the Greater Toronto Area, ages 9–11
Leaders from across the GTA bring their Girl Guide units to campus for the day in the hopes of earning an Engineering or Physics badge. Female undergraduate engineering students lead the hands-on activities. The 2015 Badge Day will take place on May 6. Go ENG Girl
For Ontario girls in grades 7–10 and their parents
This popular annual event provides an opportunity for girls and their parents to learn about the wonderful world of engineering from female professionals, academics and students. Participants engage in fun, hands-on projects, and  speak with people currently working in engineering. U of T holds this event in collaboration with the Ontario Network of Women in Engineering (ONWIE). Go ENG Girl takes place each October. (Read more.) 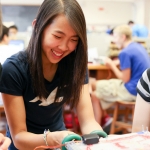 Go CODE Girl
For Ontario girls in grades 9–11
Offered in collaboration with ONWIE, Go CODE Girl will provide an exciting opportunity for girls to learn about the world of coding and software development, and career opportunities in the fields of computing and engineering. The inaugural event will take place on February 21. (Read more.) 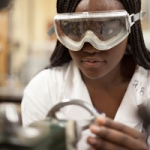 Girls’ Leadership in Engineering Experience (GLEE) Weekend
For female high-school students who’ve been offered admission to Engineering
The annual GLEE weekend offers female Engineering applicants an opportunity to learn more about the Faculty and the student experience by spending time with female U of T Engineering students, professors and alumnae who share a desire to improve lives through engineering. The GLEE weekend will take place in late May. 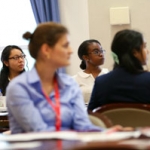 Young Women in Engineering Symposium
For top grade 12 female science students
Last October, 84 of Ontario’s top Grade 12 female science students came to U of T for a full day of hands-on engineering workshops, an alumni panel, a “Mythbusters” student panel, a design team and student organization showcase, and lab tours. Participants had the opportunity to meet current U of T Engineering students, faculty and alumni. The symposium is expected to become an annual event, and future dates will be announced. (Read more.) Timeline for Women in Engineering at U of T
U of T Engineering has a long history of remarkable women. A few highlights:

1920: First female architect in Canada graduates from U of T Engineering
1927: First woman to graduate with an engineering degree from U of T
1958: First woman joins the Faculty’s permanent academic staff

See a timeline of the history of women in engineering at U of T.