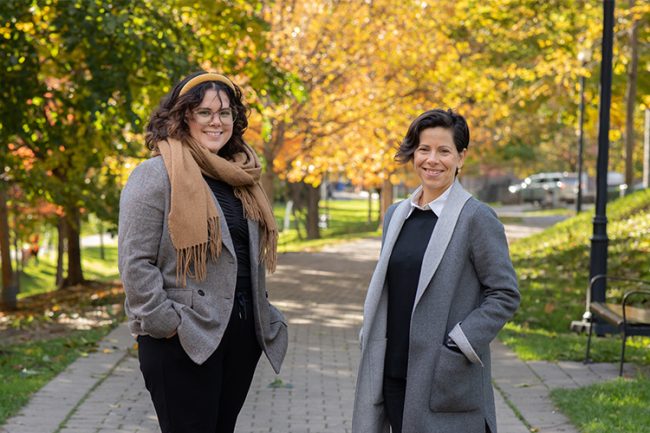 November 25, 2021
U of T's Élyse Caron-Beaudoin and Marianne Hatzopoulou (CivMin) are working together to shed light on how fracking impacts air quality for B.C. communities and residents' exposure to contaminants. (Photo: Johnny Guatto)

With thousands of wells and counting, the Northeast region of British Columbia is one of Canada’s most important hubs of hydraulic fracturing, or fracking — the process of blasting pressurized liquid at rock formations to fracture them and release the natural gas trapped inside.

Part of the region sits atop the Montney Formation, a massive, football-shaped tract of land that stretches into northwestern Alberta and is believed to contain one of the world’s richest reserves of shale gas.

But in addition to releasing gas, fracking also causes the emission of chemicals that can cause or exacerbate health problems, including birth defects, cancers and asthma. And while communities located near fracking areas have raised concerns about the health impacts, there has been a dearth of Canadian studies on the topic — until now.

Élyse Caron-Beaudoin, an assistant professor in environmental health in the Department of Health and Society at the University of Toronto Scarborough, is lead author of the only Canadian studies to have explored the health impacts and exposure to contaminants associated with fracking. The latest study, published in Science of the Total Environment, found high levels of some volatile organic compounds (VOCs) in tap water and indoor air in the homes of pregnant women living in the Peace River Valley in Northeast B.C. The study was designed in partnership with the Treaty 8 Tribal Association, the West Moberly First Nations and the Saulteau First Nations.

“Overall, there are consistent associations with negative health effects,” says Caron-Beaudoin, who co-leads one of the only research groups actively investigating the health impacts of fracking in Canada and previously ran a smaller pilot study that found high levels of trace metals in urine and hair samples of pregnant women in two Northeast B.C. communities.

“What we don’t have a lot of in the literature is exposure assessment — measuring the level of exposure of local communities to chemicals that are potentially emitted or released during unconventional natural gas operations.”

To help fill this gap, Caron-Beaudoin is teaming up with Marianne Hatzopoulou, a professor in the Department of Civil & Mineral Engineering in the Faculty of Applied Science & Engineering, to shed light on how fracking impacts air quality and exposure to contaminants.

It’s being supported by a $120,000 grant from XSeed, a funding program that aims to catalyze inter-disciplinary research collaborations involving scholars from the Faculty of Applied Science & Engineering and one of U of T’s other academic divisions.

Hatzopoulou’s first task is to develop air quality models — computer simulations that estimate the concentration of air pollutants generated by an activity, and the degree of population exposure to these contaminants — for various fracking scenarios.

“In urban environments, we try to quantify how much a car emits while it’s driving one kilometre,” says Hatzopoulou. “In industrial settings, we may try to understand how much is emitted from the stack as a function of the production of a certain material. With gas fracking, we try to understand what is being emitted during the different life stages of gas wells.”

The modelling, which involves combining existing measurements, data from regulatory agencies and data from published literature, includes creating an “emissions inventory.” It’s effectively a database containing information on the pollutants generated by different kinds of wells across their various stages of operation.

“What the air quality model does is resolve how air pollutants being emitted in the environment are going to disperse because of wind, meteorology, etc., and how they are going to chemically react with other species that are present in the atmosphere. Eventually, the output includes concentrations of multiple air pollutants that individuals are exposed to,” Hatzopolou says.

“Once exposures from the model are assigned to various individuals, we want to investigate how they relate to measurements conducted in homes and other markers in biological samples.”

This is where data from Caron-Beaudoin’s studies — she measured chemicals in indoor air and tap water, as well as the hair and nails of pregnant women — come into play.

“The urine gives you an indication of short-term exposure and the nails and hair more of a long-term exposure, so we can trace their exposure patterns back in time using those different types of samples,” Caron-Beaudoin says.

By probing the associations between Hatzopoulou’s modelled air pollution data and the chemical and biological samples gathered by Caron-Beaudoin, the researchers hope to develop a better understanding of the links between fracking activity and exposure to toxins.

Caron-Beaudoin’s team have also been working on developing exposure metrics related to well density, proximity and the different stages of well operation. That includes well pad preparation, drilling, fracking and gas production. The association between those metrics and modelled fracking emissions will also be investigated.

Ultimately, the goal is to generate evidence — and a suite of tools — to help estimate exposure to contaminants, an area where little knowledge exists due to the exorbitant cost of carrying out ongoing exposure studies.

“This study will provide health and exposure information, which are lacking when regulatory agencies are currently issuing permits for fracking,” Hatzopoulou says.

A more immediate priority is to empower communities with knowledge about the impact of fracking operations on their health. Such information is critical given that the communities located near Canada’s fracking hotspots are disproportionately rural and Indigenous, and are therefore already disadvantaged by health and economic disparities.

“First and foremost, it’s important to arm communities with data about their exposures, what they’re breathing and the impact of what they’re seeing every day,” Hatzopoulou says.

“That’s the goal,” Caron-Beaudoin adds. “To share the data and results with communities so that they have as much information as possible to help make decisions on the types of industrial development happening on their territory.”