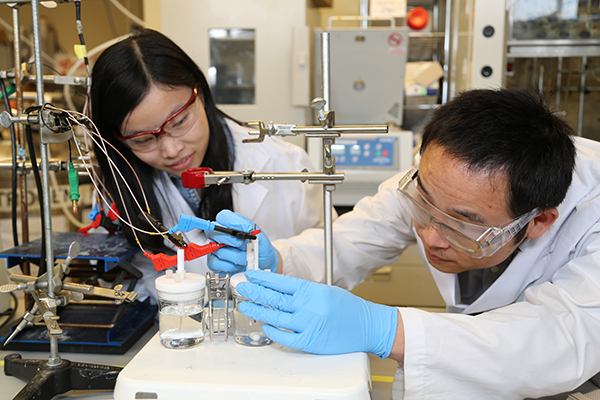 March 24, 2016
Researchers Xueli Zheng, left, and Dr. Bo Zhang set up their device to efficiently split water to store energy as hydrogen. The key is a catalyst made of tungsten, iron and cobalt that is over three times more efficient than the current state-of-the-art. (Photo: Marit Mitchell)
Sustainability 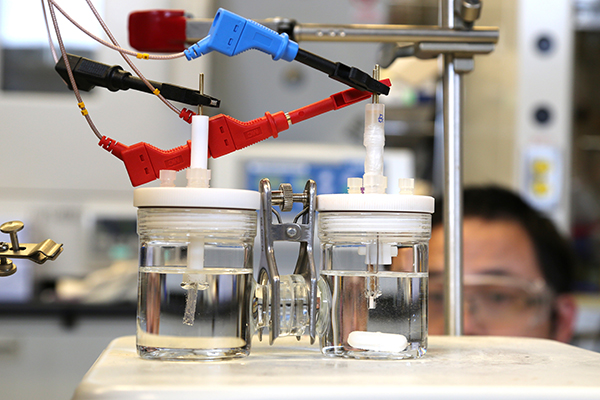 We can’t control when the wind blows and when the sun shines, so finding efficient ways to store energy from alternative sources remains an urgent research problem. Now, a group of researchers led by Professor Ted Sargent at the University of Toronto’s Faculty of Applied Science & Engineering may have a solution inspired by nature.

The team has designed the most efficient catalyst for storing energy in chemical form, by splitting water into hydrogen and oxygen, just like plants do during photosynthesis. Oxygen is released harmlessly into the atmosphere, and hydrogen, as H2, can be converted back into energy using hydrogen fuel cells.

“Today on a solar farm or a wind farm, storage is typically provided with batteries. But batteries are expensive, and can typically only store a fixed amount of energy,” says Sargent, a University Professor in the Edward S. Rogers Sr. Department of Electrical & Computer Engineering, and vice-dean, research, for the Faculty. “That’s why discovering a more efficient and highly scalable means of storing energy generated by renewables is one of the grand challenges in this field.”

You may have seen the popular high-school science demonstration where the teacher splits water into its component elements, hydrogen and oxygen, by running electricity through it. Today this requires so much electrical input that it’s impractical to store energy this way — too great proportion of the energy generated is lost in the process of storing it.

This new catalyst facilitates the oxygen-evolution portion of the chemical reaction, making the conversion from H2O into O2 and H2 more energy-efficient than ever before. The intrinsic efficiency of the new catalyst material is over three times more efficient than the best state-of-the-art catalyst.

The new catalyst is made of abundant and low-cost metals tungsten, iron and cobalt, which are much less expensive than state-of-the-art catalysts based on precious metals. It showed no signs of degradation over more than 500 hours of continuous activity, unlike other efficient but short-lived catalysts. Their work was published online today in the leading journal Science.

“With the aid of theoretical predictions, we became convinced that including tungsten could lead to a better oxygen-evolving catalyst. Unfortunately, prior work did not show how to mix tungsten homogeneously with the active metals such as iron and cobalt,” says Dr. Bo Zhang, one of the study’s lead authors and a research associate in the Sargent Group. “We invented a new way to distribute the catalyst homogenously in a gel, and as a result built a device that works incredibly efficiently and robustly.”

“The team developed a new materials synthesis strategy to mix multiple metals homogeneously — thereby overcoming the propensity of multi-metal mixtures to separate into distinct phases,” said Jeffrey C. Grossman, the Morton and Claire Goulder and Family Professor in Environmental Systems at Massachusetts Institute of Technology. “This work impressively highlights the power of tightly coupled computational materials science with advanced experimental techniques, and sets a high bar for such a combined approach. It opens new avenues to speed progress in efficient materials for energy conversion and storage.”

“This work demonstrates the utility of using theory to guide the development of improved water-oxidation catalysts for further advances in the field of solar fuels,” said Gary Brudvig, a professor in the Department of Chemistry at Yale University and director of the Yale Energy Sciences Institute.

“The intensive research by the Sargent group in the University of Toronto led to the discovery of oxy-hydroxide materials that exhibit electrochemically induced oxygen evolution at the lowest overpotential and show no degradation,” said University Professor Gabor A. Somorjai of the University of California, Berkeley, a leader in this field. “The authors should be complimented on the combined experimental and theoretical studies that led to this very important finding.”

Professor Sargent is the Canada Research Chair in Nanotechnology. The group’s work was supported in large part by the Ontario Research Fund—Research Excellence Program, NSERC, the CIFAR Bio-Inspired Solar Energy Program and the U.S. Department of Energy. In concert with this research the Sargent Group recently launched the Carbon Cure Network, an industry consortium focused on carbon capture and conversion to green fuels.