Sponging up oil from tailings ponds

Oil and water don’t mix — in theory. In reality, the two liquids can be almost impossible to separate, especially from complex chemical cocktails such as the wastewater produced by Alberta’s oil sands mining operations.

Contaminated by small amounts of bitumen and other oily substances, this wastewater can’t be discharged to the environment and is held in vast ponds awaiting treatment. A new potential solution developed by U of T Engineering researchers starts with a surprisingly simple device: a sponge.

Pavani Cherukupally (MIE PhD candidate) leads the project under the supervision of Professors Chul Park and Amy Bilton (both MIE). Previous work in Park’s lab focused on designing sponges that could be deployed to soak up oil in the event of a spill — these were made of superhydrophobic materials, which repel water but attract neutrally charged substances like oil.

Cherukupally is modifying the process to treat oil-sands wastewater. Her idea is to pump the the contaminated water through the sponges: due to attractive forces, the oily contaminants should stick to the surface of the sponge, while the clean water should flow straight through.

But when Cherukupally tried this with the superhydrophobic sponges, it didn’t work at all. “The water stayed just as dirty as it was,” she says.

Drawing on her background in physical chemistry, Cherukupally realized that the problem was that oil in wastewater behaves very differently than an oil spill. Oil in wastewater is dispersed into tiny droplets, rather than forming a cohesive slick. Each of these droplets is surrounded by a layer of charged particles, which means that they will be attracted to charged surfaces, not neutral ones.

Cherukupally ditched her neutral, superhydrophobic foams for ordinary polyurethane foam, similar to the type found in couch cushions. When she did, her sponge system removed more than 99 per cent of the suspended oil.

“The slight positive charge on the polyurethane attracts the slight negative charge on the suspended oil droplets,” says Cherukupally. “As well, the pore size is small enough to provide a large surface area, but not so small that the sponge gets clogged with debris.”

“We’ve been both surprised and impressed by the results that Pavani has achieved so far,” says Park. “Her expertise in surface chemistry and physics led us in a new direction that we wouldn’t otherwise have tried.”

Now, Cherukupally is experimenting with ways of coating the sponge to modify its surface chemistry and adjust its performance to a wider range of situations. In collaboration with U of T researchers Dr. Wei Sun and Annabelle Wong, supervised by Professor Geoffrey Ozin (Chemistry), Cherukupally has created foams that have both charged and neutral areas on their surface.

When tested with oil sands tailings water, these “hybrid” sponges had an overall removal efficiency of 98 per cent, slightly less than regular polyurethane. However, their removal rate — the speed at which they suck up the pollutant particles — was six times faster.

“A faster uptake of contaminants will directly impact the operational energy costs as well as the overall cost-effectiveness of the final system,” says Bilton. “To get things ready for scale-up, we’ll need to perform some systematic experiments to evaluate how this new foam works as part of the treatment process.”

Cherukupally was inspired to work in water treatment by witnessing the slow, gradual pollution of the Musi river in her home city of Hyderabad, India. “Nobody knew how to clean the water, and a lot of my classmates got sick,” she says. “When this project was proposed to me I thought: ‘This is what I should be doing.’” 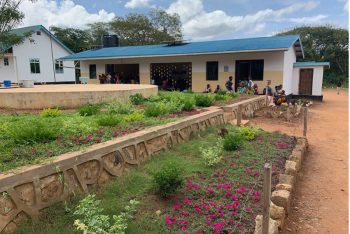