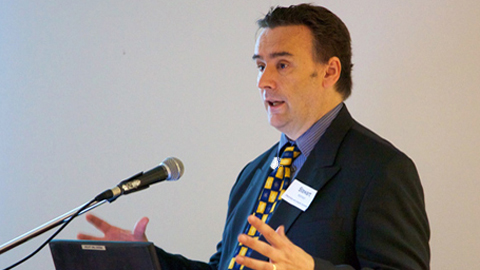 Professor Stewart Aitchison (ECE) has been elected a Corresponding Fellow of the Royal Society of Edinburgh (RSE). Originally established in 1783, the RSE is Scotland’s national academy of science and letters. Benjamin Franklin and economist Adam Smith were among its Founding Fellows. Of the more than 1500 RSE Fellows, there are only 62 Corresponding Fellows (Fellows who are not resident in the UK).

Professor Aitchison is one of the world’s most prominent researchers in the field of nonlinear optics, particularly the area of spatial optical solitons. His pioneering work in this area has led to the creation of new all-optical devices for signal processing applications, the demonstration of “the world’s fastest switch” in 1991, and the development of new types of light sources. In parallel, his work on optical biosensors has resulted in a lab-on-a-chip device that enables accurate monitoring of HIV in remote communities. His 250 journal publications have been cited over 9,850 times. He also holds eight patents, which have led to the creation of four new companies.

Professor Aitchison served as Vice Dean, Research for the Faculty from 2007-2012. During his term he oversaw a 45 per cent increase in federal funding and a 75 per cent increase in major partnership funding in the Faculty. He also supported the creation of a Faculty-wide energy initiative and helped initiate major projects on sustainable cities and research collaborations with India. He is currently the U of T Associate Scientific Director for the Network Centre of Excellence, IC-IMPACTS, which funds collaborative research between Canada and India in the areas of safe infrastructure, clean water and public health.

“We are delighted that this prestigious academy has recognized Professor Aitchison’s world-leading research achievements,” said Cristina Amon, Dean of the Faculty of Applied Science & Engineering. “His election confirms the global impact of the research being conducted at the Faculty and the outstanding international reputation our professors have earned.”

Professor Aitchison will be formally inducted into the RSE in a ceremony in Edinburgh on May 19, 2014.