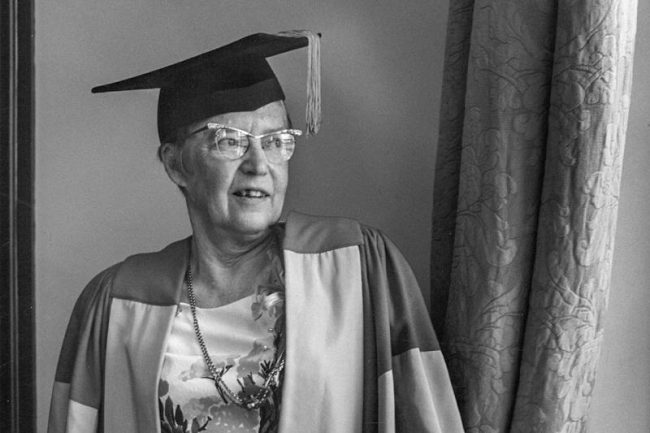 The Rise of Elsie MacGill

October 1, 2020
After graduating from U of T Engineering in 1927, Elsie MacGill went on to become an aeronautical engineer during the Second World War, earning the nickname “Queen of the Hurricanes.” (photo courtesy University of Toronto Archives)

In celebration of alumna Elsie MacGill’s Heritage Minute, released today, U of T Engineering News has republished “The Rise of Elsie MacGill,” the cover story from the 2015 edition of Skulematters.

Like their colleagues in the United States, Canadian engineers had many reasons to be proud as the Society of Women Engineers (SWE) — a not-for-profit educational and service organization — marked its 60th anniversary celebration in 2010. The creation of SWE in 1950 inspired engineers internationally and touched careers and lives in many countries. Canadians have a unique reason to applaud the Society’s founders, however, because they gave a boost to one of Canada’s national heroines, a person who went on to change the country’s social, economic and legal fabric, and a person who continues to fascinate and inspire six decades later.

Elsie MacGill (ElecE 2T7) was involved in SWE early on, being named an honourary member in 1953. By that time, she had established herself as a leader in the engineering profession for many years. Still, despite her accomplishments, MacGill said that she was truly “astonished” when, that same year, the selection committee made her the unanimous choice to receive the second SWE Achievement Award and the mantle of outstanding woman engineer for that year. Her friends and admirers, however, were not astonished at all.

A succession of firsts

By this point in her life, MacGill had attracted an impressive collection of engineering awards and recognitions and had been celebrated as the rst woman aeronautical engineer. She had completed graduate studies in the eld; conducted research; worked as a professional and introduced new innovations, including the design of an entire aircraft in the 1920s and 1930s.

Her profile in the profession increased dramatically early in the Second World War when the 33-year-old MacGill was appointed chief aeronautical engineer at the booming Canadian Car and Foundry plant in Fort William, Ont. There, fighter aircraft, notably the famed Hawker Hurricanes, were being built for the Allied forces overseas.During the war, MacGill was credited with introducing mass production techniques to the aviation industry, modifying the Hurricane for winter use and establishing standards for test pilot reporting. In the post-war years, she continued to break new ground as the first woman aeronautical engineer to open a consulting business and the first to serve as the chair of a United Nations aviation technical committee. In the latter capacity, she led in the drafting of the first airworthiness regulations for the new International Civil Aviation Organization.

Comfortable on both sides of the border, MacGill returned to the U.S. and continued to blaze trails as a woman doctoral student at Massachusetts Institute of Technology (MIT), amidst some of her profession’s brightest lights. The list of professional achievements and recognitions would have alone marked MacGill as worthy of celebration, particularly as a pioneer for her gender.

But there are other, even more moving features of MacGill’s life and story that were known to her colleagues and continue to encourage others to this day.

On the eve of her 1929 graduation from Michigan, 24-year- old MacGill fell ill to awaken the next morning fully paralyzed from the waist down. She had been struck by a form of polio and would spend the next three years con ned to bed and a wheelchair at her parents’ Vancouver home. Her plans for a wedding and the launch of her engineering career were cancelled, and she had reason to wonder whether her personal and professional lives would ever recover. But she kept her career aspirations alive by writing journal and magazine articles on aviation from her bed, and slowly she regained enough strength to use metal walking sticks to get around.

As soon as she was self-sufficient, she moved back east to MIT, and then to the string of industry projects that made her mark and reputation in engineering. Ironically, the high point of her recognition by SWE in 1953 was followed by a serious setback a few months later. She slipped on a rug and broke her good leg, plunging her back into a wheelchair and into a series of ill-advised surgical treatments that threatened to disable her permanently. Again, she recovered, and again she used the enforced convalescence to write. This time, she produced a biography of her late mother, Helen Gregory MacGill, the first woman in Canada to receive the title of “judge.”

The experience of writing My Mother, the Judge stirred new passions in MacGill, prompting her, now nearing the age of 50, to plunge into the cause of women’s rights in a more energetic way. This led to her election as national president of the Canadian Federation of Business and Professional Women’s Clubs, and subsequently, to membership as effective vice-chair of the landmark Royal Commission on the Status of Women in Canada in 1967. Through the Royal Commission, MacGill influenced laws and national policies, often through words that were reflected in federal legislation, for decades to follow.

Her death in 1980, at the age of 75, was indirectly caused by her disability. At the time, many felt her life had been cut short. It was clearly full, however, and its impact has been enduring.

Those who wonder where MacGill found the strength and motivation to persist through disabling illness; periods of economic, social and military struggles; and gender bias that denied her some professional opportunities, often point to the role model of her mother, her sister’s support, and the love of her husband, Bill Soulsby, and her stepchildren.

Those who knew MacGill best also suggest that she was buoyed through hardships and challenges by what her colleagues described as a “rare sense of humour and scintillating sense of fun.”

The model of having fun while striving to improve the world and to do one’s personal best may, in fact, be MacGill’s greatest legacy to her profession, her gender and humanity.