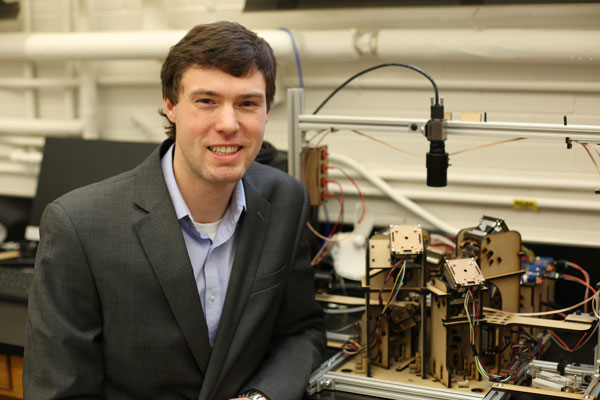 A team of scientists injects a tiny mechanical device into the human body, where it swims to the site of a potentially fatal blood clot and removes the blockage, saving the patient’s life. That may sound like the plot of a science fiction film, but in Professor Eric Diller’s (MIE) lab at U of T Engineering’s Department of Mechanical & Industrial Engineering, such ideas are getting closer to science fact.

Diller and his team build robotic devices that range in size from just less than one millimetre, down to a few microns, the size of individual bacteria. “Our big dream is to put these inside the human body, to do things like targeted drug delivery, and potentially some surgical or other medical procedures,” says Diller. Delivering drugs directly to where they are needed in the body can allow for lower doses and fewer side effects. This is particularly important for chemotherapy treatment, which aims to destroy cancer cells while leaving healthy ones alone.

The team’s tiny machines don’t necessarily look like robots as we traditionally think of them, but they are able to carry out some basic tasks, such as grasping and releasing nearby objects. A couple of years ago, Diller helped create a type of microbot capable of building tiny bridges:

Because the devices are so small, there is no room for batteries. Instead, they respond to the action of external magnetic fields. “I think of the robot as the whole system: the device, the external electromagnetic coils, the computer that controls them and the microscopes that track where they are,” says Diller.

The magnets used in the devices are made of alloys containing rare-earth elements such as neodymium and are extremely powerful. This means that only safe, low-strength magnetic fields are needed to move them through the body. External fields can also make the robot change shape — for example, opening and closing its claw — by causing magnets in the device to switch between attracting and repelling modes.

Some of Diller’s most recent work has focused on building machines that can efficiently swim through human blood. This is challenging because everyday physical forces have very different effects at the micro scale: to a miniscule robot, the attractive forces between individual water molecules make it feel like a much thicker liquid. “It’s like they’re swimming through molasses,” says Diller. “A tail that flaps from side to side like a fish is not a good strategy at this scale.”

In a recent publication, Diller and his team designed a microswimmer only one-tenth of a millimetre thick and about one millimetre long. It looks like a flat sheet, but contorts itself into undulating waves when subjected to a rotating magnetic field. Its movement is similar to a flounder or other flatfish. “It turns out to be a great way to move objects around at this size,” he says. “We can go forward or backward very easily, and even independently control two microswimmers at the same time.”

It will be some time before the team’s devices can undertake more complex operations, but their potential is vast. “The first medical applications of this research are going to be in augmenting the capabilities of minimally-invasive surgery,” says Diller. “This is particularly appealing for operations which require a lot of dexterity and precision such as in neurosurgery or work inside the eye. Then we’ll build on that to develop tools that can travel through the body under their own power. There are many challenges to solve along the way, but that’s what makes it so fascinating for us to explore.”