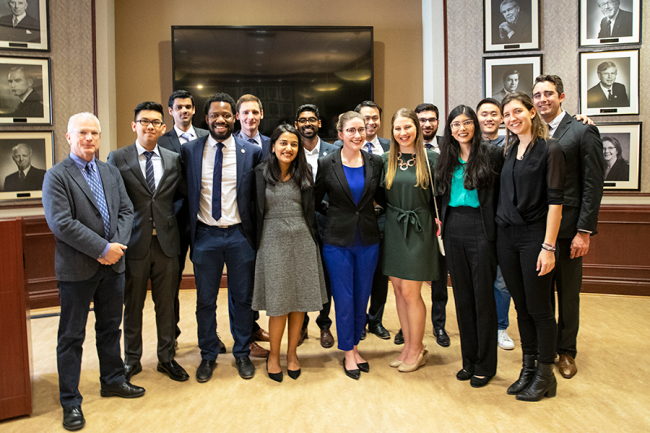 U of T Engineering celebrates student leadership with 18 Cressy Awards

April 22, 2019
18 U of T Engineering students were recognized for their exceptional contributions to the Faculty and university communities with 2019 Gordon Cressy Student Leadership Awards. (Photo: Erica Rae Chong)

Eighteen U of T Engineering students were presented with the 2019 Gordon Cressy Student Leadership Awards on Monday.

The students were recognized for their outstanding extra-curricular contributions to U of T Engineering and to the university community as a whole. Their diverse activities range from serving in leadership roles in student government bodies such as The University of Toronto Student Union and the Engineering Society, to design achievements with the University of Toronto Aerospace Team and the Blue Sky Solar Racing team, and organizing community events such as the Women in Science & Engineering Conference.

This year’s U of T Engineering winners join 190 other students from across the University of Toronto who were honoured at a ceremony held at Convocation Hall.

Prior to the formal awards ceremony, recipients joined Vice Dean, Undergraduate Tom Coyle at the annual Dean’s Tea to celebrate their accomplishments.

“Your meaningful contributions have made our Faculty, the University and our broader community a better place. Your enthusiasm and energy have also inspired many more to follow in your footsteps,” says Coyle. “It has been my privilege to witness your growth and development over the last few years and I look forward to following all you will accomplish in the future.”

Established in 1994, the awards are named after former U of T Vice-President of Development and University Relations, Gordon Cressy, for his commitment to higher education, and leadership in fundraising and community service. Since their inception, over 3,000 students have received the award.

Congratulations to all of this year’s awardees: