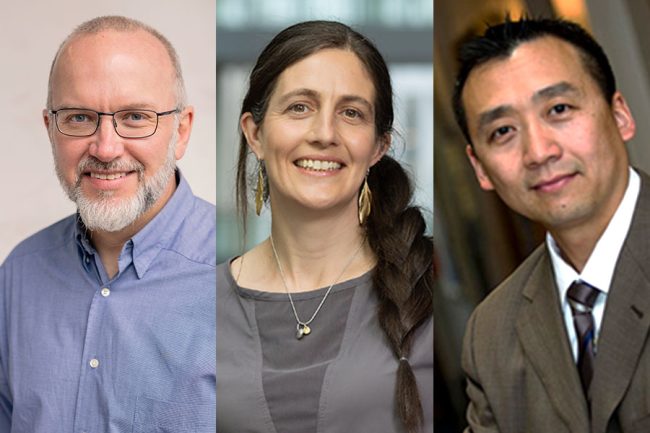 The CAE is a national institution through which individuals who have made outstanding contributions to engineering in Canada provide strategic advice on matters of critical importance to Canada and to Canadians.

“Through research, teaching, leadership and entrepreneurship, these exceptional faculty and alumni have had a tremendous impact nationally in areas ranging from aviation to infrastructure to next-generation healthcare technologies,” says Chris Yip, Dean of U of T Engineering. “On behalf of the Faculty, congratulations to all our new CAE fellows.”

Liu is an internationally renowned researcher in aircraft systems and control. He leads the Flight Systems and Control Research Laboratory and is the director of the Centre for Aerial Robotics Research and Education (CARRE). Liu’s work has provided innovative solutions to guidance, navigation and control problems to enable intelligent aerial systems development and autonomous aviation applications. His research has been patented and applied by industry and has also led to a startup company. A leader in his professional community, Liu serves on editorial boards of leading journals and technical committees of international societies. He is a fellow of the Canadian Society for Mechanical Engineering and the Engineering Institute of Canada and is an associate fellow of the Canadian Aeronautics and Space Institute and the American Institute of Aeronautics and Astronautics.

McGuigan is a leader in the field of tissue engineering and disease modelling. Her group applies methods from materials and chemical engineering to assemble artificial tissues in a dish to accelerate drug discovery and the development of next-generation regenerative therapies. McGuigan’s work exploring tissue disfunction after injury or disease has made a particular impact on the field: technologies developed in her lab are being commercialized and adopted internationally for industrial practice. McGuigan has also trained more than 80 researchers and developed several innovative research training tools for graduate students. The impact of her work has been recognized with prestigious national and international awards, including the Canadian Society for Chemical Engineering Hatch Innovation Award and the Tissue Engineering and Regenerative Medicine International Society Americas Young Investigator Award.

Simmons is the U of T Distinguished Professor in Mechanobiology and the scientific director of the Translational Biology and Engineering Program in the Ted Rogers Centre for Heart Research. Simmons’s ability to cross boundaries and bridge disciplines has established him as a world leader in mechanobiology. He has made pioneering contributions in understanding how biomechanical forces contribute to heart valve disease and regeneration, and has developed lab-on-a-chip micro-technologies to model tissues and organs for drug discovery. His work has led to six patents and a startup company developing technologies for stem cell engineering. Simmons is a fellow of the Biomedical Engineering Society, the American Institute for Medical & Biomedical Engineering, the Engineering Institute of Canada and the Canadian Society for Mechanical Engineering.

Kopp is an internationally renowned expert in the field of wind engineering, in the areas of building aerodynamics and wind tunnel testing, the effects of severe storms on the built environment and the occurrence of tornadoes in Canada. He has transformed approaches to identifying tornado occurrence and classification as a co-founder of the Northern Tornadoes Project, and transformed design of building components and cladding under severe wind loads through the development of pioneering test methods at the ‘Three Little Pigs’ project, together with many theoretical developments. His research is widely used in wind design standards around the world.

Ladak is internationally known for his engineering innovations in medical imaging, hearing healthcare technologies and simulation platforms for training of clinicians and surgeons. He holds three patents that are licensed by multinational imaging companies, and he has been involved in the formation of several companies focusing on imaging and simulation. His work has been recognized by the National Institutes of Health (USA), and he was inducted into the Collegium Oto-Rhino-Laryngologicum Amicitiae Sacrum, an international organization that brings together leaders in ear-nose-throat research. He is an engineering educator whose students have received numerous awards and have become leaders.

Mao, President of MW Technologies Inc., and past VP of Research and CTO at Trojan Technologies, is an internationally recognized ultraviolet (UV) light expert and water innovator. He led science and innovation to drive global business growth and technology adoption, aiding over one billion people with safe and clean water. He is a talent developer and entrepreneur who has led 355 Mitacs units and has been helping Cleantech startups to commercialize game-changing technologies to reduce greenhouse gas emissions by a half gigatonne per year by 2050. He has played a leadership role in the International Ultraviolet Association (IUVA) to support adoption of UV as a way to decrease the spread of SARS-COV-2.

Polak is renowned in the field of structural engineering, with pioneering contributions to the design and testing of concrete and reinforced concrete structures. Her innovations include new technologies for the retrofit of concrete slabs, powerful analysis tools for evaluation and testing of design standards, global structural damage assessment methods and fibre-reinforced polymers. Implemented worldwide, Polak’s work has directly contributed to international standards for infrastructure design. She sits on numerous international standards committees, is a fellow of the American Concrete Institute and the Canadian Society for Civil Engineering, and is recipient of the Alexander von Humboldt Fellowship.

Throughout his distinguished career, Stubina has provided engineering leadership at major metallurgical companies, including Sherritt International Corporation where he serves as vice president of technologies. As confirmed by his publications, patents, awards and invited lectures within Canada and countries abroad, he has been eminently successful in the generation and application of innovative strategies associated with the processing of non-ferrous and precious metals. Stubina has also made substantial contributions within professional organizations, as exemplified by his service as the vice president of international at the Canadian Institute of Mining, Metallurgy and Petroleum, and president of the Metallurgy and Materials Society.