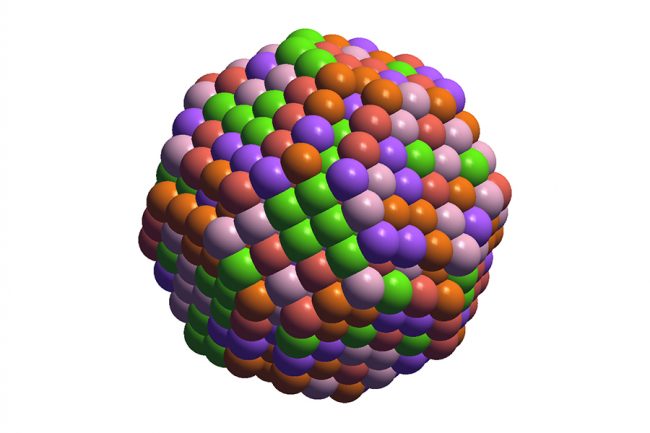 August 18, 2020
In this simulation, atoms of five different chemical elements within nanoparticle are represented by different coloured spheres. A computer algorithm developed at U of T Engineering analyzes thousands of possible geometric configurations of these elements in order to predict which ones will have the best performance as industrial catalysts. (Image courtesy Zhuole Lu)
Advanced Manufacturing

A team of U of T Engineering researchers is leveraging machine learning to enhance the manufacturing of common everyday items. They have created an algorithm that efficiently sifts through thousands of possible geometric configurations to design better industrial catalysts.

“Catalysts speed up chemical reactions, making manufacturing more efficient and less costly,” says Professor Chandra Veer Singh (MSE). “They are used to produce everything from plastics to industrial fertilizers, and researchers around the world are constantly trying to improve their performance. Alloying is a key strategy in this field.”

An alloy is a combination of two or more metal elements, such as platinum or iridium. Many catalysts are binary alloys that contain two metals, or tertiary alloys that contain three. But in 2018, a team of American researchers developed a new synthesis technique that allows an alloy of five different metals to be used as a catalyst.

“These alloys are referred to as high-entropy alloys (HEA) because the large number of elements creates a high level of entropy, which is a measure of amount of disorder in the material,” says Zhuole Lu (MSE MASc candidate). “Some HEAs may turn out to be excellent catalysts, but the challenge is that there are just too many possible combinations.”

Those numbers become even larger when geometric effects are taken into account. Even for a single five-element combination, there are millions of different ways those same elements could be arranged on an alloy surface.

Creating and testing all the potential combinations and arrangements would be a very costly and time-consuming way to find new catalysts. Singh, Lu and postdoctoral fellow Zhi Wen Chen recently published a paper in the journal Matter that outlines a new approach.

The team designed and implemented a machine learning algorithm — known as a neural network — that can realistically simulate the properties of a given HEA, without having to actually produce it in a lab.

“What makes this work special is its inclusion of structural effects,” says Chen. “You can imagine the metal atoms in the HEA as plastic balls in a children’s ball pit. Current machine learning models treat the alloy as though it had a flat surface. But we know that the top of the ball pit is bumpy, and that bumpiness can have a big impact on the catalyst’s properties. Our model takes that into account.”

The team validated the model by predicting the catalytic performance of a five-element HEA that contained the metals iridium, palladium, platinum, rhodium and ruthenium. They then compared the predictions of the machine learning model with experimental measurements from five different research groups. The results matched surprisingly well.

In the future, the team hopes to expand the approach, creating a model that can simulate different combinations of elements as well as different geometries. Such an algorithm could quickly point researchers toward the most promising catalyst candidates.

“By simultaneously accounting for different metals and different structures, we believe our tool will help materials scientists rapidly screen for the best new catalysts, while also enabling a deeper understanding of HEAs and alloy catalysts in general,” says Singh. 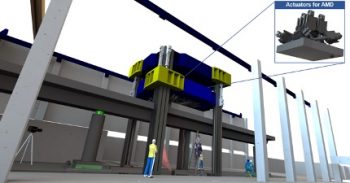