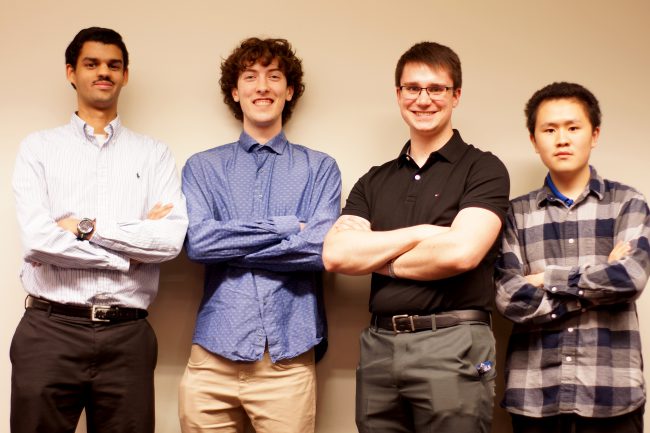 A team of U of T Engineering students is set to launch an experiment aboard the National Research Council of Canada’s (NRC) Falcon 20 jet as part of the Canadian Reduced Gravity Experiment Design Challenge (CAN-RGX).

Team FAM (Fluids Affected by Magnetism) is one of just four post-secondary teams selected for this year’s CAN-RGX, joining teams from the University of Calgary and Queen’s University. The teams will fly various experiments in microgravity during the flight campaign, taking place in Ottawa at the end of July 2018.

The flight campaign for the competition will take place over three days in Ottawa during the week of July 25, 2018.

“What really struck me was the opportunity to not only fly in microgravity but to conduct an experiment in microgravity and really see the progress from start to finish — from the proposal to conducting the experiment on a very unique testbed,” said Twesh Upadhyaya (Year 3 EngSci), one of the two primary mission specialists for Team FAM who will fly onboard the Falcon 20. “This year’s CAN-RGX is a unique opportunity for us to put into practice all of the engineering design knowledge we’ve gained so far.”

The competition challenges post-secondary student teams from across the country to design and build an experiment to be flown on board the NRC’s Falcon 20 — an aircraft modified for parabolic flight to simulate microgravity— in collaboration with the Canadian Space Agency. This is the second year a team from U of T Engineering was selected for the competition.

Team FAM’s experiment will examine heat transfer in paramagnetic fluids and their behavior under external magnetic fields. To carry out the experiment, the team developed a compact optical setup that enables them to “see” the temperature of the fluid. A fluid cell holds the paramagnetic fluid, and a set of two electromagnetic coils is positioned around it.

The team’s literature review suggests nobody has ever visualized the heat distribution in a paramagnetic fluid under microgravity conditions before.

“We have a system that will — at the peak of the flight when we hit zero gravity — automatically trigger the experiment to start,” says Upadhyaya. “We’ll do one parabola, gather the data, and repeat the experiment with different parameters. The plan is to do eight to 10 parabolas.”

“In a space station, they may want to shuttle heat from one component to another,” Upadhyaya says. “Paramagnetic fluids offer an interesting solution, and by testing various magnetic patterns in our experiment — although it’s only one small step — it’ll provide some idea of the most effective way to use paramagnetic fluids in heat transfer.”

Outreach is an important part of Team FAM’s goals, as they plan to share their project with high school students to showcase the opportunities available in engineering at the post-secondary level.

“We wanted to inspire high school students, get the word out there, and showcase what they can do in engineering at university — especially the University of Toronto,” Upadhyaya says.