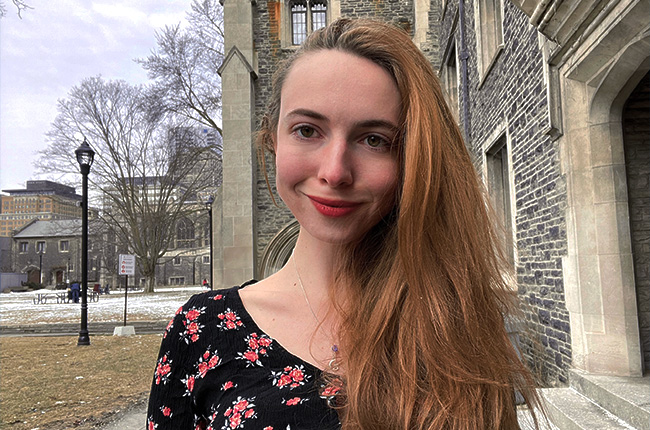 U of T Engineering undergrad selected for NEXT36 national entrepreneurship program

When Diana Virgovicova (Year 2 CompE) found out she had been selected for NEXT36, she almost couldn’t believe it.

“I was very surprised,” says Virgovicova. “Most of the people who were chosen are five to ten years older than me. Usually they prefer to accept those who have graduated or are closer to working full time on their company.”

Every year, NEXT36 taps three dozen of the most entrepreneurial undergrads and recent grads from coast to coast. Over eight months, the program provides them with mentorship, seed funding and other resources designed to help them launch their businesses.

The selection process was intense. Out of thousands of applications, the NEXT foundation narrowed the candidate pool to 72. These candidates sit for up to five rounds of interviews over the course of a single day, pitching their business idea under strict time limits.

Virgovicova’s business idea is still in the early stages, but it broadly focuses on the creation of a centralized platform for culturally-rooted crafts from countries around the world. When the subject of her relatively young age came up with the reviewers, she says she made them smile by saying that business is all about taking risks.

“The next day they called me,” she says. “And I was accepted shortly after.”

Virgovicova’s engineering journey began when she was 14. She had just returned from a trip to India with her mother, determined to do something about the polluted water she had seen. She was sure a solution could be found in technology.

Virgovicova contacted a professor at the University of Slovakia, in her native country, who introduced her to photocatalysts. These materials absorb light to kick off a chemical reaction that eliminates an unwanted substance.

While photocatalysts for many different types of reactions already exist, they typically convert UV radiation. Virgovicova set out to create one that uses visible light, which would enhance its ability to break down the contaminants in polluted water.

“I independently learned a software program used in quantum chemistry that allows you to model novel molecules,” she says. “You calculate the angles between elements, the charge distribution, all these properties to predict how it’s going to react in different environments.”

The work earned Virgovicova an international Stockholm Junior Water Prize, which in turn helped propel her to a Lester B. Pearson International Scholarship to attend The Edward S. Rogers Sr. Department of Electrical & Computer Engineering at U of T.

She always dreamed of combining an engineering degree with a strong business background to increase the impact of the products she innovates, and Virgovicova says that scholarships and awards have been critical to enabling her to achieve her goals.

“I was not raised by a rich family. I was raised by a single mom, who is a teacher,” she says. “I didn’t think I’d even be able to go to university because of money. I definitely had a long journey to get here.”

Virgovicova says she draws inspiration from “all the women who are not afraid to take on challenges. I especially like reading about women who are successful in traditionally male-dominated areas, like engineering.”

Professor Deepa Kundur, Chair of ECE, appreciates how Virgovicova has made her unique background a strength.

“Diana’s drive to help people, and her initiative and creative problem-solving have found the ideal outlet in electrical and computer engineering, which plays a crucial role in so many applications,” says Kundur. “We’re very excited to see what she does with this opportunity from NEXT36.”

Virgovicova, who has made a habit of standing out from the crowd, has advice for others looking to do the same.

“If you have an idea, talk to as many people as possible. I know that many people are afraid to reach out, but potential mentors are all almost always happy to help. That’s my experience.”

To hear more from Virgovicova, listen to the January 2022 episode of Tell Me More: Coffee With Chris Yip