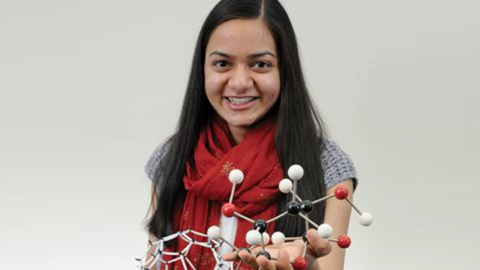 Burhanpurkar’s project, titled “Time-Integral of Distance: Uncovering A New Property of Fundamental Physics”, was guided by professor Steve Mann and PhD student Ryan Janzen (both ECE), in collaboration with Brad Bass of Environment Canada and the International Panel on Climate Change.

The award-winning project validated the concept “absement”, a term originally coined by Professor Mann to describe the time-integral of distance, which was historically a mysterious phenomenon.

“Professor Mann had been thinking about the possible influence of the time integral of displacement in nature, mostly music, for a few years already,” said Burhanpurkar. “I came up with the design of a novel experimental apparatus consisting of a fluid reservoir with a microprocessor-controlled, linear valve whose motion resulted in the precisely controlled release of fluid at continuously varying, pre-programmed rates.

“I built about ten iterations of the device before finally getting it right.”

Burhanpurkar took top honours at last year’s Google International Science Fair with the same project, but winning at this event was still a thrill. “I was beyond excited!” she said. “I had won the Grand Platinum award a couple of years ago at the national science fair, so I was really surprised to be given it again.” She also brought home several category awards, including the Discovery Challenge Award, the Actuarial Foundation of Canada Award, a Gold Medal and university scholarships.

The mentor group met with Burhanpurkar several times to discuss the project design in advance of the fair. She and Janzen spoke frequently, especially as she picked up the calculus necessary for the work. Their next goal is to get the work published.

“We’re happily continuing to work with Maya as well as some new students, and would welcome any additional highly-gifted students to apply absement to other areas of biology, physics, ecology and medicine,” said Janzen.