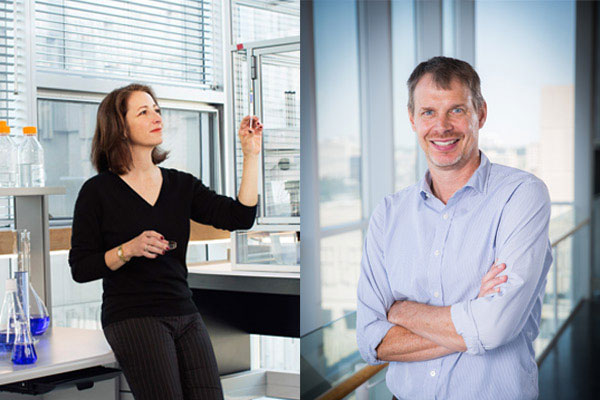 More than 50 researchers and clinicians at the University of Toronto and its partner hospitals are participating in Medicine By Design, the new centre for regenerative medicine announced on July 28, 2015.

The centre, which builds on decades of U of T research dating back to the demonstration of the existence of stem cells by James Till and Ernest McCulloch, will design and manufacture cells, tissues and organs to treat degenerative disease.

Among its experts are Professor Peter Zandstra (IBBME), one of the key leaders, and Professor Molly Shoichet (IBBME, ChemE) of the Faculty of Applied Science & Engineering. Both Shoichet and Zandstra work with stem cells, which have the ability to become any type of cell in the human body, and could one day be used to repair or replace damaged tissues.

“The bar is very high, but if you’re going to dedicate yourself to something, you might as well shoot for the stars,” Shoichet says.

Writer Tyler Irving spoke with Shoichet and Zandstra about how Medicine by Design will change lives.

What do you focus on in your research group?

Shoichet: In regenerative medicine, we’ve done work in three areas of the central nervous system: the brain, the spinal cord and the retina. What we’re trying to do is overcome loss of function that accompanies a stroke, a spinal cord injury or loss of photoreceptor cells at the back of the eye.

Some drugs can slow down this loss of function, but they can’t stop it and they can’t reverse it. That’s the promise of regenerative medicine and stem cell transplantation.

One of the biggest challenges is that most of the cells that are transplanted into the nervous system die. We work with stem cell biologists to identify what are the best cells for transplantation. What we then do in our lab is to engineer scaffolds. Essentially, we figure out the best way to package those cells, to deliver them to the body so that they survive.

Zandstra: In our lab, we’re fundamentally interested in what controls stem cell fate. We model the gene regulatory networks that make stem cells special, and try to determine how we might manipulate those networks to get cells to do certain things on demand. For example, if we want a stem cell to become a blood cell or a heart cell, how do we make that happen in a very efficient manner? One of the applications of this information is that we can use it to grow large numbers of cells in bioreactors. We partner with the Centre for Commercialization of Regenerative Medicine to bring our technology to market.

Both of you are also working on growing human tissues in the lab. Why is that useful?

Zandstra: Clinical trials for a new therapy are very expensive: phase one might cost two to five million dollars and phase 2 and 3 might cost ten times that. Wouldn’t it be fantastic if we could mimic clinical trials in a controlled laboratory environment?

One of the things we do is try to develop tissue mimetics — small amounts of tissue grown from stem cells. We could use these to determine the safety and effectiveness of a new therapy in a much more cost-effective way, accelerating that process and reducing the costs of doing trials in patients.

Shoichet: In our lab we’ve been doing this with breast cancer cells. You might say, cancer is something we’re trying to get rid of, why would you want to grow it in the lab? You want to grow it so you can test new drugs and see if they work effectively, or test existing drugs to see which one will work best for a particular patient.

It’s already possible to screen potential drugs against particular cell types in the lab: this is called high-throughput screening. It has a lot of benefits, but it’s not perfect; there are lots of false positives and false negatives. We’re trying to develop a better tool by growing cells in a three-dimensional environment, closer to what they would experience inside the body. We call it high-content as opposed to high-throughput; it wouldn’t be as fast, but you would get a lot more useful information.

Imagine it’s 5, 10 or 25 years in the future. What might doctors be able to do as a result of your work that they can’t do now?

Zandstra: I think diagnosis will improve because we will have a much more powerful way of identifying the genetic, or even the environmental causes of disease by analyzing the molecular state of cells. It’s this idea of predictive and more personalized medicine. I also hope we will be able to implement solutions to particular genetic diseases.

As a specific example, take diabetes. One of the things that happens with this is your beta cells – your insulin-producing cells – get attacked by your own immune system, and eventually are destroyed. If we can generate beta cells from stem cells, maybe we’ll be able to replace the damaged cells in diabetic patients.

Shoichet: Ideally what we can do in the future is to be able to grow cancer cells from a particular patient in an environment that mimics how those cells would respond in a person. We would be able to close the gap between what works on cells in a dish versus what works in animal model versus what works in people. It would be a lot less expensive and time-consuming than using animal models, and you could understand disease progression.

From a patient perspective, the goal would be to deliver better care to an individual. We would have a better understanding of what their particular disease is and we’d be able to test different strategies to determine what will have a better effect for them.

What role does collaboration play in your work?

Shoichet: We couldn’t do anything without our collaborators. One of the most exciting things for us is working with the best, most internationally renowned researchers. They know what they key questions are in their fields, and we are then able to work with them to engineer a solution. None of us can do it on our own.

Zandstra: I’m so excited to be at this interface, not just between engineering and medicine, but also with mathematics, basic science and other fields. I think this exciting approach to problem-solving can really only take place at a university. Instead of having a problem be solved using a specific discipline, we look at the problem and ask: who can best contribute to the solution? We bring those people together as a team to try and do that.

What drives you to do this work?

Shoichet: I worked in industry before academia. I realized that when it comes to the really big problems, if we in academia don’t try to solve them, then nobody else will. In industry, you have to make money, whereas academics have a little bit more freedom to discover and invent.

The central nervous system is extremely complicated, but there is also the opportunity to do something really significant. The bar is very high, but if you’re going to dedicate yourself to something, you might as well shoot for the stars.

Zandstra: I think that stem cells are beautiful. They have so many options for what they can be, yet they’re rare, they’re difficult to work with and we don’t really understand how their decisions are made. So there’s the beauty of discovery.

The other thing is the opportunity. When we get answers to our questions, and can immediately think about translating that into developing new technologies which can be commercialized or developed into potential therapies that might benefit people – that’s a pretty neat space to work in.

These interviews have been condensed and edited.