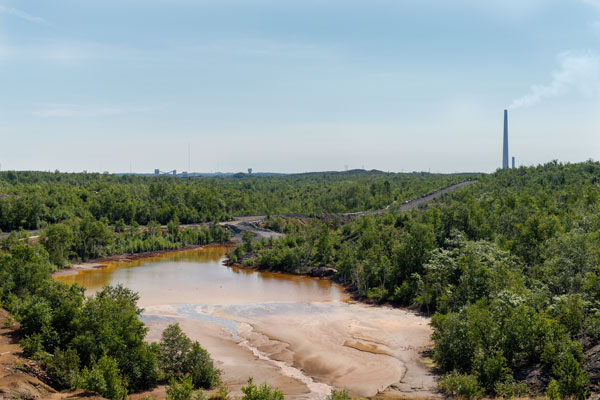 Elements of bio-mining: Engineering collaboration aims to turn mine waste into valuable metals

September 13, 2017
An industry-academic collaboration led by U of T Engineering professors is studying the use of microorganisms to treat mine waste in tailings ponds. The researchers also hope to extract valuable metals that could offset the cost of processing. (Photo: mine drainage- Sean Caffrey)
Advanced Manufacturing

They are invisible to the naked eye, able to withstand extreme conditions and capable of breathing rocks. They are the microbes that thrive in tailings ponds at mining sites around the world, and a team of Canadian researchers believes they are the key to transforming waste material into something much more valuable.

“There are bugs that thrive on metabolizing sulfur, others on metabolizing iron,” says Professor Vladimiros Papangelakis (ChemE). “If we can control such biochemical reactions, we could both remediate the waste and recover valuable metals that could pay for the cost of processing.”

Papangelakis, along with Professor Elizabeth Edwards (ChemE) is leading the Elements of Bio-mining project, a multidisciplinary collaboration between U of T Engineering, Laurentian University, and the University of British Columbia (UBC), as well as a number of technology, engineering and mining companies, including Glencore, Vale, Teck, Barrick and Hatch.

Together, the team is developing ways to process a number of different types of material left over from mining activities across Canada, from nickel mines in Sudbury, Ont. to coal mines in British Columbia. They aim to understand how native microorganisms at these sites convert chemicals one form to another, and how they might encourage certain beneficial reactions while discouraging others.

For example, nickel refining produces tailings, which are rich iron sulfide. When exposed to the oxygen in the atmosphere, chemical reactions begin to convert the sulfides into sulphuric acid. This process — known as Acid Mine Drainage (AMD) — is catalyzed by microorganisms that live in the rainwater or melting snow that washes over the tailings.

The sulphuric acid can dissolve any nickel that remains in the tailings, as well as other metals such as copper and zinc and even toxic elements like arsenic, selenium, cadmium, mercury. Because of its toxic and acidic nature, tailings water cannot be discharged into the environment unless it is collected and treated. Currently, these tailings sit in enormous ponds around the mine sites — the water covers the tailings, acting as an oxygen barrier and slowing the AMD process.

Papangelakis and his collaborators hope to treat these tailings using bioreactors, vessels that enable them to control the temperature, pH, dissolved oxygen levels and other culture conditions. One idea is to encourage the growth of organisms that would convert the sulfide not into sulfuric acid, but into elemental sulfur, which may have some value if recovered. At the same time, the metal-rich wastewater could be captured and refined to recover metals, potentially providing a revenue source to offset the cost of treatment.

Other members of the team are looking at the waste rock that was separated before the refining process. Here sulfur is less of a problem, but there are still potentially valuable metals that could be recovered. Professor Nadia Mykytczuk of Laurentian University is studying ways to encourage bacteria to selectively dissolve these metals from heaps of rock, a process known as in-situ bio-leaching.

“There is a large diversity of organisms out there that we are only starting to understand,” says Mykytczuk. “Some of them like oxygen, but others thrive under anaerobic, or oxygen-free conditions. We’re looking at the whole range of possibilities, and once we find something promising, we can decide how to address specific types of waste.”

A third branch of the team is focusing on waste from coal mines, which is often high in selenium. Though a necessary nutrient in small amounts, too much selenium can be toxic to many forms of life; for example, it can interfere with the development of fish embryos, reducing the number of viable adults in the next generation.

“There are some microorganisms that can actually use selenate, the dissolved form of selenium, for energy,” says Professor Sue Baldwin of UBC, another one of the project partners. “They take the selenate and turn it into elemental selenium, which precipitates out as nanoparticles attached to the organism’s cells. In this form, it’s no longer dissolved and you can just filter it out of the water.”

Baldwin points out that selenium is just one of many pollutants that exist in waste from coal mining. And as with nickel mining, there may also be valuable metals or other materials that could be recovered through biochemical transformations.

Papangelakis says that there may be up to $7 billion worth of nickel alone locked in the tailings from Sudbury’s mines. “The question is, can this value be recovered in a way that makes the treatment and remediation process economically viable?” he says.

In addition to the universities and the industrial partners, the project has attracted support from a number of research funding agencies, including the Natural Sciences and Engineering Research Council (NSERC), Genome British Columbia and Australia’s Commonwealth Scientific and Industrial Research Organisation (CSIRO). Most recently, the project received $4 million from the Ontario Research Fund.

“It’s a very challenging problem that needs to be solved,” says Papangelakis. “But we have assembled a very good knowledge base, with experienced people in mining, chemistry, biochemistry and process engineering. There will be cross-fertilization and new ideas, which will create a springboard to understand new science and launch initiatives we haven’t thought of yet. To me, this is the most exciting part.”