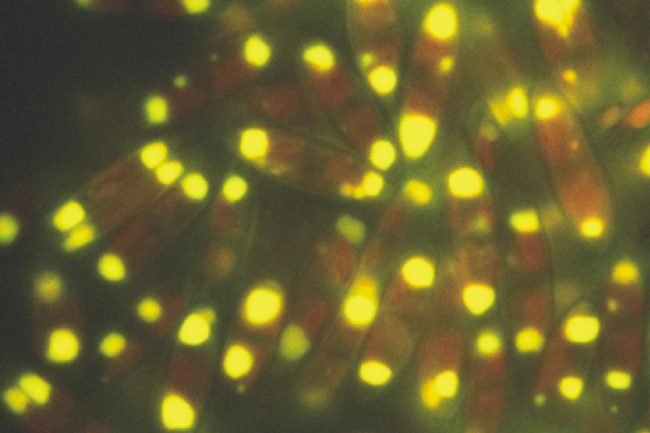 Climate change won’t just bring rising sea levels and more extreme weather — it could also impact your dinner plate. A new study from U of T suggests that a warmer world will decrease the availability of a nutrient that is key to development and brain health.

Most humans get their DHA from eating fish, which in turn get it from the algae that they eat. But Rodgers points out that as ocean temperatures rise, the need for algae to produce DHA decreases.

“To counteract the effect of higher temperatures, which can make their cell membranes too fluid, algae typically produce fewer polyunsaturated fats (such as DHA) in a process known as homeoviscous adaptation”, he says. “Algae is the bedrock of aquatic food chains, so this decrease in DHA production works its way right up to the fish we eat, which make up a significant source of the long chain omega-3 fatty acids in the global diet.”

Rodgers used a form of computer modelling known as Monte Carlo uncertainty analysis to predict the amount of DHA that will be available under various scenarios of climate change developed by the United Nations Intergovernmental Panel on Climate Change.

Under the ‘worst case’ scenario — known as RCP 8.5, which assumes that greenhouse gas emissions continue to rise at current rates indefinitely — the team found that over the next 80 years, the amount of DHA available in the food chain would decrease by 10 to 58%.

The team also estimated the results on the diets of humans around the world. If the loss of DHA were spread out evenly, the team suggests that up to 96% of humans would not be able to obtain enough DHA to maintain a healthy diet.

But that scenario may under-state the impacts on vulnerable populations, the researchers say, because wealthy countries such as Canada — which doesn’t produce enough DHA domestically and relies upon trade to supplement this need — would likely push to the front of the line.

“As global DHA levels decrease, it’s not difficult to envision a situation where rich countries use their economic advantages to increase their access to naturally occurring sources and with more expensive supplements,” says Rodgers.

This means that the impacts of a shortage would likely be felt by the most vulnerable populations in poorer countries, as well as by more vulnerable people, such as infants and developing fetuses.

“Even at the low end of the model, meaning the less extreme scenarios, the impact of declining DHA will still be significant,” says Rodgers. “Based on the current trajectory of the climate, even the most optimistic projections have us heading towards a pretty alarming loss in human potential.”