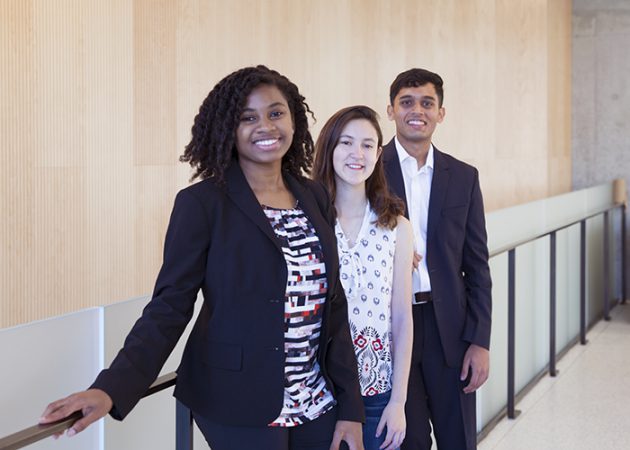 Adriana Diaz Lozano Patiño (Year 1 EngSci) has dreamt of being an engineer since she was 12 years old. As one of seven U of T Engineering first-year students to receive a Lester B. Pearson International Scholarship, she has moved from Mexico City to Toronto to pursue her dream at Canada’s top engineering school.

“When I got the news that I won the Pearson scholarship, I couldn’t believe what I was seeing on my phone,” said Patiño, who is following in the footsteps of her older brother Ernesto Diaz Lozano Patiño (CivE 1T5+PEY, MASc 1T8), an alumnus and former president of the Engineering Society. “It not only meant my dream was actually materializing, but it made me realize that when you are passionate about what you want to do, and work hard for it, you can achieve anything.”

For Devansh Khare (Year 1 MechE), choosing U of T Engineering was a very easy decision. “I wanted an engineering education that makes students think differently, while exposing you to multiculturalism,” said Khare, who is originally from India. “U of T Engineering offers an extremely diverse student and faculty body, and a challenging engineering program that emphasizes on application. It’s committed to building engineers who are capable of improving their community.”

Alana Bailey (Year 1 CivE), whose home country is Jamaica, is especially excited to be among the first to learn and collaborate in the new Myhal Centre for Engineering Innovation & Entrepreneurship. “I really like the active and experimental learning approach to the Myhal Centre. I’m very excited to spend my studies there,” said Bailey.

Although Bailey is just beginning her undergraduate studies, she is already envisioning how she’ll be making a positive difference as a future engineer. “Growing up in a developing country and having travelled to other countries, I’ve been able to compare different levels of infrastructural development to that of my own,” said Bailey.

“I would love to be a part of growth in my country, especially in the area of transport and road works,” she added.

Munachi Jachike Ernest-Eze (Year 1 EngSci), who hails from Nigeria, also aspires to make an impact in his community after he graduates. “I am so excited about entering a world where I get maximum resources to fuel my desire to invent and improve my community through my engineering skills,” said Ernest-Eze, who is passionate to learn more about aerospace and robotics while at U of T Engineering.

‘A false sense of security’: How automated vehicles can impede driver performance, and what to do about it