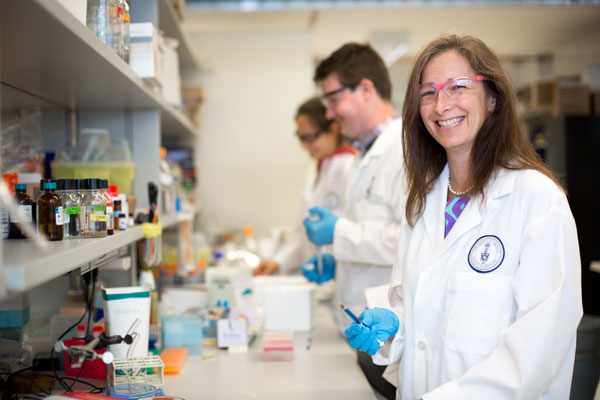 May 2, 2017
University Professor Molly Shoichet is among the winners of this year’s Killam Prizes, which celebrate working scientists, writers, doctors and researchers who have dedicated their careers to solving challenges in our daily lives. (Photo: Roberta Baker)
Human Health

“It is a great honour to be in the company of so many distinguished Canadian researchers, both past and present,” said Shoichet. “This award will accelerate our research and our efforts to improve the lives of people everywhere who are living with the effects of cancer, stroke, blindness and other currently irreversible conditions.”

Awarded by the Canada Council for the Arts, the Killam Prizes celebrate working scientists, writers, doctors and researchers who have dedicated their careers to solving challenges in our daily lives.

Shoichet is the second consecutive U of T Engineering professor to receive the Killam Prize in Engineering, following Elizabeth Edwards (ChemE) who won the award last year. Joining her on the 2017 list are fellow U of T professor Tom Hurka (Philosophy), who won the Killam Prize for Humanities, and three other winners in the Social Sciences, Natural Sciences and Health Sciences categories. Also honoured are the winners of the Killam Research Fellowships, which provide funding for independent research on a variety of pressing topics.

Shoichet holds the Canada Research Chair in Tissue Engineering and is a leading researcher in stem cell transplantation and regenerative medicine. Her lab group is known for its use of materials called hydrogels that surround and protect stem cells when they are injected in the body. These hydrogels help stem cells survive and integrate into tissues, including nervous tissue damaged by stroke, macular degeneration or other diseases.

Shoichet has published more than 500 papers, patents and abstracts, and given more than 350 lectures worldwide in regenerative medicine, tissue engineering and drug delivery. She has won numerous awards, including the 2015 L’Oréal-UNESCO For Women in Science Award for North America and the 2013 Queen Elizabeth II Diamond Jubilee Medal. She is the only person to be a Fellow of Canada’s three National Academies, and is both a Foreign Member of the U.S. National Academy of Engineering and a Fellow of the American Association for the Advancement of Science.

Shoichet is also passionate about public understanding of science. She is U of T President Meric Gertler’s senior advisor on science and engineering engagement and is the co-founder of Research 2 Reality, which uses digital media to communicate cutting-edge research performed in Canada and spark nationwide awareness. In 2015, she received the Fleming Medal and Citation from the Royal Canadian Institute in recognition of her outstanding contributions to science communication.

“Molly Shoichet’s research is pushing the boundaries of biomedical engineering to enable people around the world to live longer, healthier lives. Her work perfectly illustrates the innovative ways our Faculty and our profession are addressing the world’s most pressing challenges,” said Cristina Amon, Dean of the Faculty of Applied Science & Engineering. “On behalf of the Faculty, I extend my warmest congratulations to Professor Shoichet on this prestigious honour.”

Shoichet and her fellow awardees will be honoured at a gala to be held at Rideau Hall in Ottawa on May 30.

Watch Professor Molly Shoichet communicate her passion for her research in this video from TEDxToronto 2015.