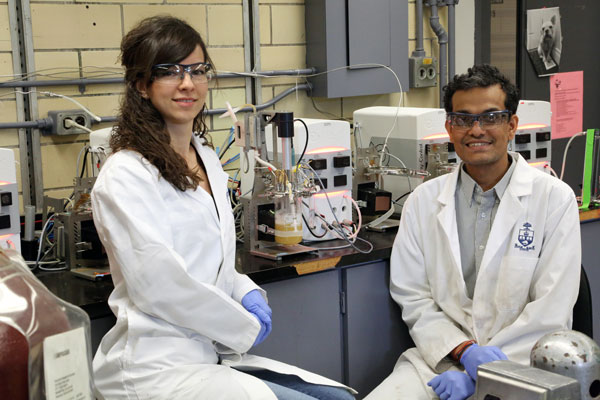 October 26, 2017
Chemical engineering PhD candidate Kayla Nemr and Professor Krishna Mahadevan grow yeast in a bioreactor. Along with their collaborators, they are using these organisms to transform bark, leaves and stems into the chemical building blocks of materials such as nylon. (Photo: Tyler Irving)
Sustainability

Nylon — used in everything from clothing to car parts to toothbrush bristles — is derived from oil, a nonrenewable fossil fuel. A team of researchers from U of T Engineering is working on a way to make the same chemical from a renewable source: plants.

“Nylon is a copolymer made from two monomers: one is hexamethylene diamine, and the other is adipic acid,” says Professor Krishna Mahadevan (ChemE) the principal investigator on the project. “Our goal is to use yeast to make these chemicals from sugars, instead of from oil.”

Most sugar is harvested from crops such as sugarcane and corn. But these sugars are costly due to high demand for their use in food and as feedstock for ethanol fuel. Instead, Mahadevan and his collaborators — which include Professors Alexander Yakunin (ChemE), Alexei Savchenko (University of Calgary), Kristin Baetz (University of Ottawa) and Vincent Martin (Concordia University) — are targeting lower-cost sugars derived from cellulose, the world’s most abundant natural polymer.

Cellulose is the major component of wood, but it’s also present in bark and in the stalks, leaves and cobs of corn plants. Materials such as these currently have little industrial value, and are either used as fertilizer or burned for energy. By chemically transforming cellulose into sugars and then turning those sugars into nylon, the team aims to create new sources of revenue for farmers, forestry companies and chemical manufacturers.

They have already had some success: by transplanting a gene from a bacterium into a strain of yeast, they enabled the organism to convert the sugar glucose into adipic acid, one of the two precursors of nylon.

“So far we have only made small amounts, milligrams per litre,” says Mahadevan. “For industrial application, we will eventually have to get this up to grams per litre. But the basic concept is there.” Future work will focus on scaling up this process and on developing a yeast strain that can produce hexamethylene diamine, the other precursor to nylon.

Bio-based chemicals are already starting to penetrate the industry. For example, one of the project partners is BioAmber, a company that uses yeast to turn corn sugar into a chemical called succinic acid. Traditionally made from oil, succinic acid is a key building block in a variety of products, from food flavourings to synthetic rubber. BioAmber’s bio-based succinic acid is produced by the tonne at the company’s Sarnia, Ont. plant.

“We’re glad to have BioAmber as a partner, because they know a thing or two about how to scale up production of these bio-based chemicals,” says Mahadevan.

Another project partner is FPInnovations, which has developed a process to turn bark and other forestry waste into sugars for Mahadevan’s yeast to feed on. “These sugars are a mixture of glucose and xylose,” says Mahadevan. “What’s great is that there are already yeast strains out there that are ideally suited to growing on this kind of diet.”

The project has received more than $10 million in funding over the next four years from a variety of sources, including federal and provincial granting agencies and in-kind support from the project partners. Major funders include the Natural Sciences and Engineering Research Council, the Ontario Ministry of Research and Innovation and Genome Canada.

For Mahadevan, nylon is just the beginning.

“The chemical industry is vast,” he says. “There are so many compounds bought and sold on a daily basis. Many of them aren’t made by natural organisms, but some are, and others could be with a little bit of tweaking to existing strains. That’s what metabolic engineering is all about, and that’s what we do in our lab.”

Read more about this story in the Sarnia Journal