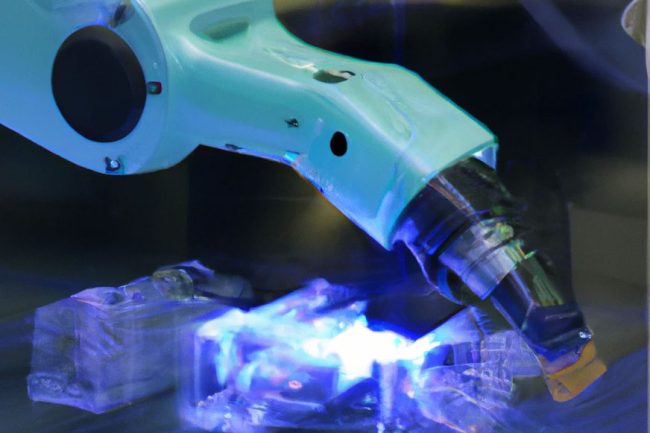 September 21, 2022
Machine learning model DALL·E produced this image from the prompt “an autonomous robot doing materials science with a sentient AI looking on in the background.” In a similar way, a new AI-enabled platform at U of T Engineering will extrapolate from the properties of existing materials to create new kinds of metal alloys for a variety of applications. (Image: DALL·E/OpenAI)
Data Analytics & Artificial Intelligence

From keeping wind turbines ice-free to catalytically converting waste CO2 into useful products, advanced materials will be critical for developing the sustainable technologies of the future. A new system known as the ‘Sputtertron’ could help find them.

“This materials acceleration platform will be a unique, AI-controlled tool that combines both the synthesis of new materials and their characterization,” says Professor Jason Hattrick-Simpers (MSE), who is leading the team building the new platform.

“It will allow us to increase the rate at which we discover these new materials by factor of 1,000.”

The project is one of four from across U of T Engineering that received support announced today from the Canada Foundation for Innovation’s John R. Evans Leaders Fund.

The name of the device comes from the term ‘sputtering,’ a technique that involves bombarding the surface of a material with energetic particles and analyzing what comes off. Sputtering is often used in industry to coat one material with another material in a process called physical vapor deposition — one example of its use is the manufacture of computer chips.

But the Sputtertron will not only be capable of creating new alloys via sputtering; it will also autonomously characterize and analyze the electronic properties of those new alloys. Using artificial intelligence, the platform can model those properties to imagine the next material to be made, and direct its creation, all without any human intervention.

Hattrick-Simpers and his team will use the funding to purchase the equipment and software they need to build the Sputtertron, which they hope to have up and running by December 2023. They are particularly interested in a class of materials known as compositionally complex alloys/oxides, or CCAs.

“CCAs are fascinating in that they typically contain five or more primary alloying elements,” says Hattrick-Simpers. “Even if you restrict yourself to only around 30 useful elements, there are billions of possible alloys and oxides to be explored, of which the community has collectively studied on the order of 10,000.”

Such materials could be used to extend the lifetime of electric vehicles and their components, or to make infrastructure such as wind turbines more resilient. They can also be used as catalysts, speeding up the chemical reactions that convert captured CO2 into fuels, commodity chemicals or other valuable products.

Hattrick-Simpers says that a key aspect of the project is that its data and findings will be made available to other researchers around the world.

“We enable scientific equity by providing anyone who is interested actionable knowledge and working computational tools to build upon what we have done, and hopefully find other new and promising materials, as well as commercialize new technologies,” he says.

The team is even planning to run a competition every year to design new computer models that can predict the properties of advanced materials. The top three finishers will collaborate with Hattrick-Simpers and his team to validate their predictions using the Sputtertron.

Three more projects at U of T Engineering were also announced in the latest round of JELF funding. They are:

For his part, Hattrick-Simpers is excited about the possibilities for collaboration raised by the new project.

“Having the Sputtertron placed here at U of T, where folks from the National Research Council, Natural Resources Canada, the Acceleration Consortium, A3MD, and the Vector Institute can all have direct access and provide input into the latest AI technologies, is absolutely amazing,” he says.

“We are very much looking forward to continuing to work with our collaborators and to moving from demonstrating the viability of these materials to really using them to change the world.”