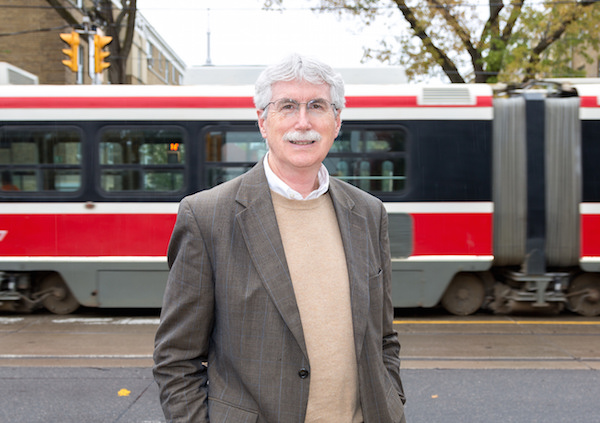 This story is Part 2 of a seven-part series, U of T Engineering in the City, running throughout fall 2015.

Just before leaving by bike to interview U of T transportation guru Eric Miller (CivE), I checked my smartphone for new email. Fifteen minutes later, as I walked into the Galbraith Building on the St. George campus, I checked it again, to remind myself of his office number. When I shared this story, Miller, a professor of civil engineering and director of the University of Toronto Transportation Research Institute, pointed out that my carrier’s cell phone system captured the time and location of both queries, and that this information could be put to good use.

While these data points didn’t reveal my mode of travel nor my path, a sophisticated transportation model might surmise that I cycled, using the locations and time elapsed.

This kind of raw information traditionally hasn’t found its way to transportation planners because it wasn’t accessible. Yet in the next several months, Miller and an impressive interdisciplinary team will launch iCity, a series of nine projects meant to tap into the vast troves of digital data that, when analyzed and combined with rider surveys, census tables and other demographic information, can be used to paint a much more granular and timely picture of how residents of the Greater Toronto area and Waterloo, Ont., move through their cities. The projects will focus on everything from public transit and parking management in the two cities to the development of more responsive technical platforms for crunching the numbers and “toolkits” to help municipal planners create “complete streets” designed to accommodate pedestrians of all ages and abilities and all types of vehicles.

But the goal of iCity, Miller stresses, isn’t merely descriptive; it’s also meant to be a diagnostic tool to help decision-makers and residents understand how their planning and transportation investment choices will affect their cities. “The data are your eyes and ears to see what’s going on in the real world,” explains Miller, whose team has conducted extensive ridership surveys in Greater Toronto that are used by government officials. He points out that the iCity projects will use far more real-time digital information to make the analysis more exact. “It’s a living lab concept.”

The University of Toronto initiative involves several institutional and private-sector partners, including the City of Toronto, Metrolinx, Waterloo Region and OCAD University, as well as IBM Canada. Besides readings from sensors that measure traffic flow, Miller says the investigators will be looking to gain access to a wide array of other travel-related digital sources, such as Presto card readings (such as when GO or TTC riders tap their cards to enter a transit vehicle), GPS data from fitness trackers and payments to municipal parking systems, including meters and a new smartphone app that informs drivers of space availability (and thus offer clues about how drivers respond to such information).

By combining these real-time sources with the Transportation Research Institute’s models, which project travel patterns using historical information gleaned from rider surveys, Miller says iCity will allow planning officials to do a better job demonstrating how different transportation projects — such as a new subway or LRT line, or building “complete streets” — will affect communities and the surrounding city. Miller will also draw on expertise from OCAD U to develop new techniques for visualizing and mapping travel patterns.

The overarching aim is to help cities make more informed choices about how they function and grow. Says Miller: “We have to get to the point of telling good stories to the bureaucrats and politicians that say, ‘this is how a proposed investment really works and this is why it is or isn’t a good idea.’”