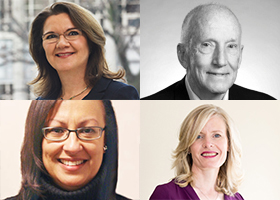 Cristina Amon joined the Faculty in 2006 as Dean and Alumni Professor in Bioengineering. As Dean, she has been tireless in her efforts to advance U of T Engineering’s position as Canada’s top engineering school and among the best in the world. She has also dedicated herself to increasing diversity in engineering and ensuring that Canadian engineers are prepared to lead the world in addressing global challenges. Amon’s research pioneered the development of Computational Fluid Dynamics for formulating and solving thermal design problems subject to multidisciplinary competing constraints. She has delivered keynote lectures worldwide and contributed twelve book chapters, one textbook and over 350 refereed articles to the education and research literature. Amon has been inducted into the Canadian Academy of Engineering, Spanish Royal Academy, Royal Society of Canada and the U.S. National Academy of Engineering, and elected fellow of all the major professional societies in her field, including: AAAS, ASEE, ASME, CSME, EIC and IEEE.

“We are delighted that the Ontario Engineering Association has awarded its highest honour to Cristina Amon,” said U of T President Meric Gertler. “She is not only a pioneer in her own field – she is also leading the way in educating the engineers of tomorrow, as key drivers of innovation and prosperity. The University of Toronto community is immensely proud of her accomplishments.”

Learn more about Dean Amon’s research and leadership initiatives in this video from the Ontario Professional Engineers Awards.

Michael Butt has enthusiastically committed over 50 years to the construction engineering industry. Butt started his career immediately after graduation as a site engineer with the Mitchell Construction Company in Toronto. After rising through the ranks at Mitchell, he left in 1979 to found Buttcon Limited, a 100 per cent employee-owned Canadian general contractor. Butt’s leadership and management skills, combined with his entrepreneurial spirit and his love of construction, have allowed him to grow Buttcon into a $150M-per-year company. Buttcon has successfully completed many high profile projects, including Novotel on the Esplanade, the Queen’s Park restoration and Casino Niagara. A leader in the industry, Butt has headed several industry associations and co-founded the Canadian Design Build Institute. He is a fellow of the Canadian Society for Civil Engineering and the Canadian Design Build Institute, and was inducted into the Engineering Hall of Distinction in 2011.

Claire Kennedy, currently at Bennett Jones LLP in Toronto, is recognized as one of Canada’s leading tax lawyers and transfer pricing advisors. A committed volunteer, she has provided pro bono legal counsel for charities such as Wildlife Preservation Canada and SunFarmer Canada. In 2012 she was appointed as a director of the Bank of Canada; she serves on the Bank’s Audit & Finance and Human Resources & Compensation Committees. Kennedy is a government appointee to U of T’s Governing Council and serves as chair of the Pension Committee. Her many volunteer roles with U of T Engineering include: member of the Dean’s Strategic Development Council and Campaign Cabinet Executive; member and past chair of the ChemE Advisory Board: and member and past president of the Engineering Alumni Association. In 2009 she founded BizSkule™, one of the Faculty’s most successful alumni outreach programs. Her service to U of T has been recognized with an Arbor Award and the Malcolm F. McGrath Alumni Achievement Award.

Jeanette Southwood is a Principal leading the Canadian Urban Development & Infrastructure Sector and the Global Sustainable Cities teams at Golder Associates, a global, employee-owned engineering and environmental services firm. Over the past 25 years, Southwood has been a leader in her industry, her profession and her community. She has authored many papers, made numerous presentations, taught academic and professional courses, and been recognized with national, provincial and local honours. Through her professional and volunteer efforts, Southwood has sought to build a more sustainable and healthier environment. She has provided distinguished service to many organizations, including Professional Engineers Ontario, the Ontario Environment Industry Association, the Canadian Environmental Defence Fund and the University of Toronto. Southwood is a fellow of the Canadian Academy of Engineering and Engineers Canada, and a recipient of the Ontario Professional Engineers Young Engineer Award and the Ontario Volunteer Service Award, among many others.

“These awards recognize the exceptional contributions members of our U of T Engineering community are making to our profession and to society,” said Dean Amon. “I am grateful to OSPE and PEO for these honours, and to my fellow award recipients for their commitment to engineering excellence, extraordinary leadership and dedicated service.”