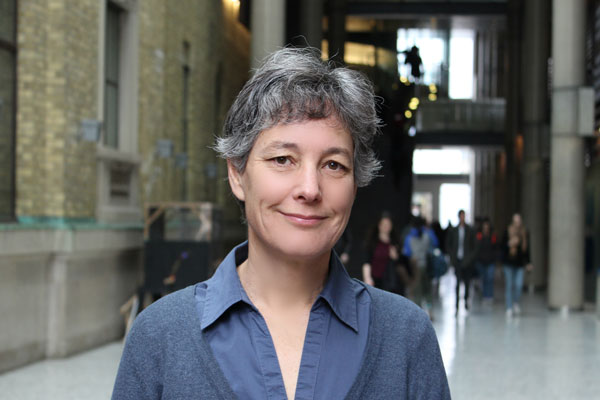 April 18, 2016
Elizabeth Edwards is one of the five recipients of this year’s Killam Prizes, presented by the Canada Council for the Arts. (Photo: Jen Hsu)
Sustainability

Professor Elizabeth Edwards (ChemE) has been named among this year’s Killam Prize winners. Presented by the Canada Council for the Arts, the awards honour eminent Canadian scholars and scientists actively engaged in research.

“It’s a recognition of a really wonderful story that I just happened to be part of,” says Edwards, one of just five recipients for 2016. “There were so many people helping, collaborating and working with me along the way. Together we were able to do really great fundamental research and at the same time start using our discoveries in the field.”

Edwards, who holds the Canada Research Chair in Anaerobic Biotechnology, is an expert in bioremediation, a field that applies micro-organisms to degrade and destroy toxic pollutants in soil and groundwater. In particular, her work focuses on chlorine-containing solvents, chemicals used as solvents in dry cleaning, industrial glues and various other commercial applications.

“When we think about growing bacteria, we typically think about providing a lot of oxygen to make them grow faster,” says Edwards. But adding oxygen deep in the ground is difficult and energy-intensive. Edwards and her collaborators found another way. “It turns out there are all kinds of anaerobes — organisms for whom oxygen is poison — that can do wonderful biochemistry and actually degrade these harmful compounds.”

The team identified a mix of anaerobic organisms called KB-1, and showed that adding it to contaminated sites greatly improved the rates of chemical degradation. The innovation served as the basis for a spinoff company called SiREM, which today provides bioremediation solutions for contaminated sites worldwide. SiREM continues to collaborate with Edwards and her team to develop microbial cultures capable of degrading other type of contaminants.

Translating innovation from the lab into the marketplace was a natural fit for Edwards, who worked for three years as an environmental consultant before joining U of T Engineering. “I went into it precisely because I wanted to know if what we were doing in the lab had any relevance to how we would deal with contaminated sites in practice,” she says. “When I came back to start my lab, I had a network of friends and colleagues in consulting, and we worked together right from the beginning.”

At U of T, Edwards oversees two multi-disciplinary research networks: BioZone, which includes nine principal investigators from across U of T Engineering, and the Industrial Biocatalysis Network (IBN), which involves researchers not only from U of T, but also the University of British Columbia, Concordia University and several industry partners. Both networks envision using microorganisms to address a variety of challenges, from renewable plastics to less expensive pharmaceuticals to energy-from-waste.

“The problems we face are enormous, so having people with complementary expertise who can bring different thinking to a complex problem is essential,” she says. Such networks also help nurture the next generation: each year, up to 30 undergraduate students work in BioZone. “They’re integral. I’ve had undergraduates who have done just as well as graduate students,” says Edwards. “Currently I have a project on soil remediation in Brazil, and we’ve hired two students to help with the monitoring and analysis.”

“Professor Edwards’ research addresses critical challenges in sustainability,” said Cristina Amon, Dean of the Faculty of Applied Science & Engineering. “It is a excellent illustration of how innovations developed at U of T Engineering are having a remarkable impact around the world. On behalf of the Faculty, I extend my warmest congratulations on this prestigious and fitting honour.”

Along with BioZone team members Krishna Mahadevan (ChemE) and Emma Master (ChemE), Edwards shared the Faculty’s Research Leaders Award in 2013. Her research has also been honoured with the Professional Engineers of Ontario (PEO) Engineering Medal for Research and Development (2011), the Kalev Pugi Award for contributions to science and business in Canada (2010), the NSERC Synergy Award (2009) and the Ontario Premier’s Research Excellence Award (2003).

Learn more about other Killam Prize and Killam Research Fellowship winners from U of T.