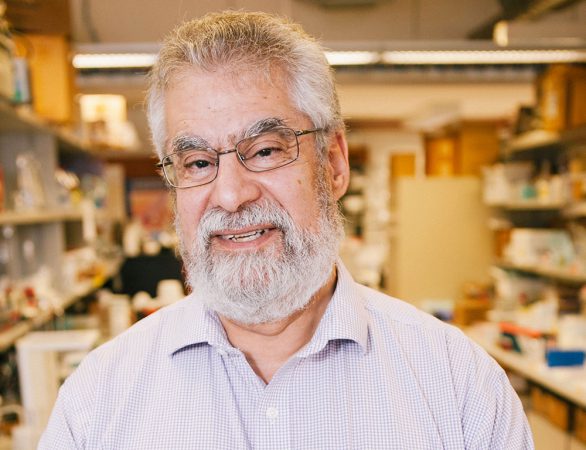 January 12, 2016
Professor Michael Sefton (ChemE, IBBME) the 2016 recipient of the International Award from the European Society for Biomaterials. The award recognizes his scientific profile, major contributions to the field of biomaterials and longstanding active collaboration with the European scientific community. (Photo: Calvin Thomas)
Human Health

University of Toronto engineering professor Michael Sefton (ChemE, IBBME) has been named the 2016 recipient of the Terumo Global Science Prize for his achievements in tissue engineering and novel biomaterials discovery.

This is only the third time the Terumo Foundation for Life Sciences and Arts has awarded the prize. Sefton joins an elite list of internationally-renowned recipients, including MIT professor of chemical engineering Robert Langer and drug delivery research pioneer Sung Wan Kim of the University of Utah.

“The award is a fantastic acknowledgement of the University’s excellence in this area and the contributions of my trainees over many years,” said Sefton. “I am particularly pleased that the Terumo Foundation specifically cited my efforts to ‘develop younger generations’ who are now promising leaders themselves.”

Sefton is a leader in the field of tissue engineering and has made significant contributions to biomaterials, biomedical engineering and regenerative medicine. He is well-known in his field for combining living cells and synthetic polymers to create tissue-like materials that could help restore lost function in humans. More recently, his lab has created biomaterials that actively promote the growth of blood vessels. Such materials accelerate wound healing and/or support the development of lab-grown tissues.

Among his numerous awards and accolades, Professor Sefton was recently named to the United States National Academy of Medicine, an honour bestowed on few Canadian scientists and engineers. He is a University Professor, the highest academic rank at the University of Toronto, which is reserved for the top two per cent of tenured faculty.

A leader in his professional community, he served as president of the U.S. Society for Biomaterials in 2005 and has spearheaded several programs to advance the field. From 1999 to 2005, Professor Sefton was director of the U of T Institute of Biomaterials & Biomedical Engineering (IBBME) leading its development into one of the top institutes of its kind in North America.

“On behalf of the Faculty, I am delighted to extend my warmest congratulations to Professor Sefton on this prestigious international honour,” said Cristina Amon, Dean of the Faculty of Applied Science & Engineering. “Professor Sefton’s world-leading research addresses some of the most important health challenges we face, and will impact millions of people around the world.”

The Terumo Global Science Prize includes a monetary award of 10 million yen or approximately C$120,000. Professor Sefton will travel to Japan in July accept the honour.