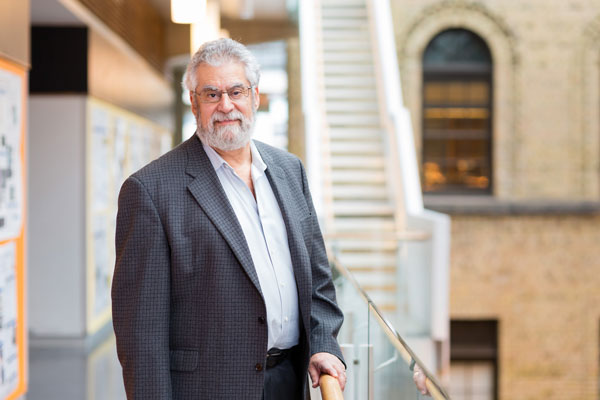 Professor Michael Sefton inducted into the Order of Canada

December 29, 2017
Michael Sefton (ChemE, IBBME), a pioneer in biomedical engineering, has been inducted into the Order of Canada. (Photo: Neil Ta)
Human Health

University Professor Michael Sefton (ChemE, IBBME) has been named an Officer of the Order of Canada, one of the country’s most prestigious recognitions. The new appointees, which also include University Professor Molly Shoichet, were announced today by Governor General Julie Payette (ECE MASc 9T0).

“Professor Michael Sefton is internationally recognized as a pioneer in biomedical engineering. His visionary leadership, both within our Faculty and in the global research community, has been instrumental in the development of this important field, which addresses critical challenges at the interface between engineering and human health,” said Cristina Amon, dean of the Faculty of Applied Science & Engineering at the University of Toronto. “On behalf of the Faculty, I extend my warmest congratulations to Michael on this tremendous honour.”

Sefton has made significant contributions to research advances in biomaterials, biomedical engineering and regenerative medicine. He was one of the first to combine living cells with polymers, effectively launching the field now called tissue engineering. More recently, his lab has created biomaterials that actively promote the growth of blood vessels. By producing drug-like activity without any drugs or cells included within the material, these materials open a new world of possibilities for applications such as wound healing and the development of lab-grown tissues.

A leader in his professional community, Sefton served as president of the U.S. Society for Biomaterials in 2005 and has spearheaded several programs to advance the field, including the Toronto Tissue Engineering Initiative. He has worked with leading clinicians worldwide to advance research on health issues such as cancer and diabetes. From 1999 to 2005, Sefton was director of U of T’s Institute of Biomaterials & Biomedical Engineering (IBBME), leading its development into one of the top institutes of its kind in North America. He currently serves as executive director of Medicine by Design, a U of T initiative that is accelerating discoveries in regenerative medicine to improve treatments for conditions such as heart failure, diabetes and stroke.

Sefton has received many distinguished awards in engineering and biomedicine, including the U.S. Society for Biomaterials Founders Award, the European Society for Biomaterials International Award, the Killam Prize in Engineering, the Engineers Canada Gold Medal, the Lifetime Achievement Award from the Tissue Engineering and Regenerative Medicine International Society and the Terumo Global Science Prize. He is a fellow of the Royal Society of Canada and an international member of the U.S. National Academy of Medicine.

More: Molly Shoichet inducted into the Order of Canada