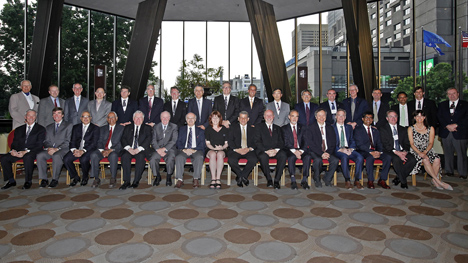 June 21, 2013
This year's inductees to the Canadian Academy of Engineering (CAE).Among them are 13 members of the U of T Engineering community.

Thirteen members of the U of T Engineering community were inducted into the Canadian Academy of Engineering (CAE) on June 20, during the CAE Annual Meeting in Montreal.

The U of T engineers are among the 48 new Fellows elected by the Academy. The CAE comprises the country’s most accomplished engineers, who have demonstrated their dedication to the application of science and engineering principles in the interests of Canada and its enterprises.

Faculty Members Honoured
Professor Cheng serves as Director of the Centre for Global Engineering and was recently named Distinguished Professor in Global Engineering. Among her many research and educational initiatives focused on the developing world, she is leading a project funded by the Bill & Melinda Gates Foundation to reinvent the toilet to provide people with affordable sanitation that doesn’t rely on running water, sewer systems or electricity.

Professor Hooton holds the NSERC/CAC Senior Industrial Research Chair in Concrete Durability and Sustainability. Well known as an expert on cementitious materials and concrete, he has been active in more than 40 standards, technical and code committees. Several new test methods and building code changes related to concrete durability have been developed or championed by him based on his research.

Professor Emeritus Jardine is an internationally recognized expert in engineering asset management whose research, teaching and seven textbooks have influenced generations of reliability engineers and industry best practices around the world. While Chair of the Department of Industrial Engineering, he spearheaded its development into a world leader in academic/industrial collaborations.

Professor Kortschot’s research in fibre composites and paper has resulted in 60 refereed journal publications and his engineering design work has resulted in four patents. A successful  entrepreneur, he co-founded Légère Reeds Ltd. and invented the Sole Skate. Currently serving as Chair of the Division of Engineering Science, Professor Kortschot received the Alan Blizzard Award for his role in creating the Engineering Strategies and Practice course.

Professor Leon-Garcia is the Distinguished Professor in Application Platforms and Smart Infrastructure at the University of Toronto. He has conducted groundbreaking research in the areas of switch architecture and traffic management, the impact of which has been felt throughout the telecommunications industry. He has also spearheaded the creation of several unique educational programs in network engineering.

A pioneer in several fields related to photonic engineering, Professor Mandelis holds the Canada Research Chair in in Diffusion-Wave Sciences and Technologies. He created the field of dental photonic engineering through his development of a thermophotonic imaging technology to detect dental caries. Professor Mandelis is also the creator of Photocarrier Radiometry, a technique for detecting defects in semiconductor-based devices.

U of T Engineering Alumni Inducted
Bill Buckley is President and CEO of ShawCor Ltd. His leadership has resulted in the growth of the company from a small, Canadian-focused pipe coating business into a global leader in the energy services industry. Buckley has been the driving force behind many of the programs responsible for ShawCor’s success, including the ShawCor Manufacturing System and other programs based on best practices in governance and business processes.

Tongwen Chen is an international authority on computer controlled systems and control over networks. He has authored more than 100 journal articles and is one of the top 1 per cent most highly cited researchers in his field. He has led three NSERC Strategic Projects focusing on better control and monitoring of various industrial processes. Dr. Chen has trained more than 50 graduate students and post-doctoral fellows.

Thomas Darcie’s research accomplishments include laying the foundation for fibre-optic access systems that are used in all modern cable television and telecommunications companies worldwide. At AT&T/Bell Labs, he has led innovation in technologies in widespread use in fibre-optic, photonic, Wi-Fi and 3G wireless systems. A successful entrepreneur, he has co-founded five companies.

One of the world’s most accomplished experimental rheologists, Savvas Hatzikiriakos is particularly known as a pioneer in the areas of polymer rheology, processing and surface science. He has partnered with major companies such as ExxonMobil, DuPont and Chevron, and two new companies have been created based on his research. Dr. Hatzikiriakos has served as President of the Canadian Society of Rheology.

Suong Van Hoa has made tremendous contributions to the advancement of knowledge and the application of that knowledge in the field of composite materials and structures. He has developed novel composites and structures which demonstrate outstanding performance in a number of applications. Dr. Hoa has worked closely with several aerospace companies to advance the use of composite materials in that industry.

Throughout his career at Hatch, Chris Twigge-Molecy has been a leader in the minerals and metallurgical field. His innovations include developing a new way to maximize arsenic elimination when processing gold ores. He has contributed widely to the profession through his leadership in the Canadian Institute of Mining Metallurgy and Petroleum, the Canadian Mining Innovation Council and the China-Canada Business Council.

From platforms at companies such as Procter & Gamble and St. Lawrence Cement, James Wilcox has led innovations in computer-controlled manufacturing, including motor vehicle production line techniques adopted across North and South America. As Warden of Camp 1, he is instilling a sense of heritage and tradition in young engineers receiving their Iron Rings. Mr. Wilcox was inducted into the Engineering Hall of Distinction in 2002.

“The induction of so many U of T engineers into the CAE is both an honour and a testament to our position as Canada’s leading engineering school,” said Cristina Amon, Dean, Faculty of Applied Science & Engineering. “The citations for these new Fellows illustrate the depth and breadth of the achievements of our faculty and alumni.”