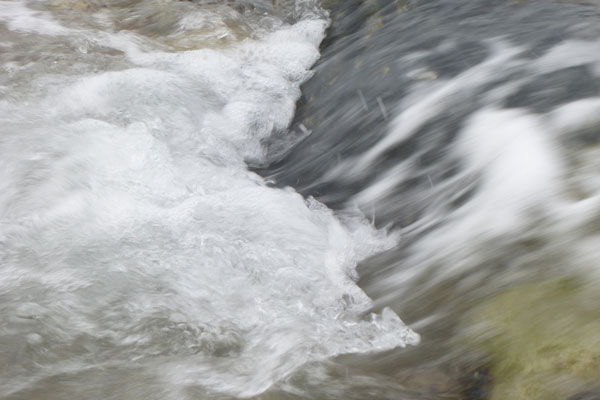 Three smart solutions from the Institute for Water Innovation

March 23, 2016
Clean water is a critical issue for the 21st century. U of T Engineering’s Institute for Water Innovation brings together researchers from many disciplines to develop new solutions in the conservation, purification and reclamation of water in Canada and around the world. (Photo: Isaac Haïk Dunn, via Flickr (Creative Commons))
Water

Population growth, climate change and environmental degradation are intensifying pressures on global water supplies, hastening the need for innovations that will improve access to clean water for drinking, food production and sanitation.

Researchers at U of T Engineering are leading the development of new technologies to improve water conservation, purification and reclamation both in Canada and around the world. The Institute for Water Innovation (IWI), which will be part of the Centre for Engineering Innovation & Entrepreneurship when it opens in summer 2017, unites the expertise of more than a dozen engineering professors across multiple disciplines to tackle this key global challenge.

Tailings ponds from oil sands mining operations in Alberta contain enough liquid to fill 390,000 Olympic-sized swimming pools. Much of that liquid still has small amounts of oil in it. But because the oil is emulsified — tiny droplets of it are suspended in water — it takes decades for it to either settle to the bottom of the pond or float to the surface where it can be skimmed off.

Pavani Cherukupally (MIE PhD Candidate), along with her supervisors, mechanical engineering Professors Amy Bilton and Chul Park, is testing a polymer foam that was originally designed to absorb sound vibrations to see if it can soak up the oil. “Oil droplets tend to have an electric charge on them, and it happens that this foam surface has a complementary charge,” says Bilton. “The pores have an appropriate size too — small enough to provide lots of surface area, but large enough to have a good uptake rate.”

By understanding exactly how the foam absorbs oil while excluding water, the team hopes to be able to design foams that absorb oil even more effectively. When the foam is “full,” the oil can be squeezed out and the foam re-used. The idea is to use these foams to filter the oil droplets from the tailings water as it is produced, without waiting years for it to sink or float. “In the future we could even design these foams to be made of biodegradable polymers to further reduce the environmental impact,” says Park.

Using foams to clean water in enormous tailings ponds could make a big difference to the landscape of the oil sands region. “This is potentially an environmentally friendly alternative to some of the methods currently used to treat that oil sands process water,” says Bilton.

Distillation is a tried-and-true method of purifying water. But boiling water to evaporate it and then cooling it to condense the vapour requires a lot of energy, and the equipment can take up a lot of space. Professor Ramin Farnood (ChemE) and his team aim to build a better system that is both compact and energy-efficient.

They have developed a new kind of polymer membrane that repels water and contains holes about one hundred times smaller than the diametre of a human hair. By flowing water across one side of the membrane and air across the other side, they cause water to evaporate from the water side to the air side through the holes, leaving contaminants like salt and bacteria behind. “The membrane provides an interface, and its porous structure dramatically increases the surface area exposed to the air,” says Farnood.

Using a membrane to increase surface area means that any treatment plant employing their technique will have a relatively small footprint: a 25-centimetre-square membrane distillation system could produce enough water for a community of 25 people. With this system, water needs to be only warm, not hot, to evaporate across the membrane, saving considerable energy compared to traditional distillation.

Farnood’s process could harness solar power to desalinate seawater or brackish water in parts of the world where drinking water is scarce. Or it could be used to clean industrial wastewater at 40 to 60 degrees Celsius, instead of 100°C.

“We see it as a platform that has very broad applications,” says Farnood. “It would enable us to tackle water scarcity in many different parts of the world.”

In many wastewater treatment systems, porous membranes are used like sieves to filter contaminants from water. A typical process, called reverse osmosis, requires energy-intensive pumps to force the water through; as the membrane gets clogged with contaminants, the amount of energy required increases. Professor Vladimiros Papangelakis (ChemE) and his collaborators are using “switchable salts” to engineer an alternative system that could offer significant energy savings.

Their process also relies on a membrane with pores, but operates in the opposite direction, which is the spontaneous direction of the water flow. This process is known as forward osmosis. On one side of the membrane is water contaminated with salts and impurities. On the other side is a briny solution containing a high concentration of engineered “switchable” salts. The principle of osmosis dictates that water naturally flows from an area of low salt concentration to an area of high salt concentration, across the membrane, leaving the impurities on the other side. The water is now in the briny solution with the engineered salts.

But as Papangelakis points out, “The whole idea would be useless if you could not remove the salts forming the more concentrated solution.” So he flips the “switch,” introducing a small amount of heat to turn the switchable salts to gases, which bubble out of the solution and leave behind clean water. “The advantage is that the water flows passively across the membrane, and therefore does not require high-pressure pumps to push it across,” says Papangelakis. Only a little, low-grade energy is needed to switch the chemicals, capture and reuse them; this kind of energy is readily available in most chemical plants.

The salts were invented by researchers at Queen’s University, and were spun off into a company called Forward Water Technologies, Inc. Papangelakis and his team are helping the company engineer and scale up the technology. The goal is to use the technique for mining or other resource-extraction industries where lots of water is required to process raw materials. 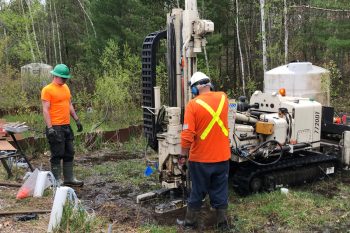 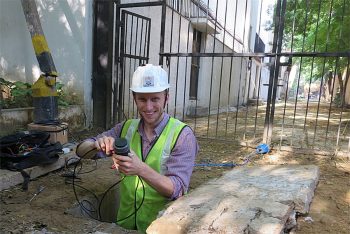