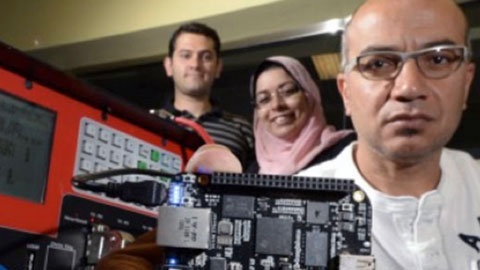 You know that feeling when you manage to hit every green light on your drive home – as if you were experiencing some unbelievable stroke of luck?

Imagine if every trip could feel like that, enabled by traffic lights that change colour based on intelligence input, rather than pre-programmed timers.

That’s what Professor Baher Abdulhai (CivE) and post-doctoral researcher Samah El-Tantawy (CivE) aim to do with their invention – called MARLIN – which recently won them the title of “Inventors of the Year” from the University of Toronto. One of four groups selected, Abdulhai and El-Tantawy were recognized for their innovative design that improves the flow of traffic and reduces maintenance and infrastructure operating costs.

MARLIN is based on artificial intelligence and game theory, using machine learning to help traffic lights optimize the most efficient timing of traffic lights through an intersection. Professor Abdulhai works in U of T’s civil engineering department, where he supervised El- Tantawy, now a post-doctoral fellow, for her PhD.

At the celebration event, President Meric Gertler said, “We are on an extraordinary trajectory,” calling the University of Toronto’s success with start-up companies one if its “best-kept secrets.”

U of T Engineering’s Zahra Murji spoke with Abdulhai about his congestion-fighting research and what might be coming next:

How does it feel to have won Inventor of the Year?

I’m proud to be part of an innovation powerhouse here at U of T, where I am surrounded by outstanding colleagues and stellar students. To receive such recognition is indeed humbling, and I thank U of T sincerely for this honour. I am also proud to have worked with Samah El-Tantawy, my former student and now colleague. She brought home several international awards from IEEE and INFORMS in 2013. I’m happy to share this award with her and express my deepest gratitude for her contributions.

Can you briefly describe your research?

My research focuses on traffic control through Intelligent Transportation Systems. We aim to produce control software using artificial intelligence and game theory to control traffic operations with lights and freeway ramp meters. The overall objectives are to reduce motorist delays so that drivers stop less at red lights, saving gas, frustration and the environment.

MARLIN, the award winner, is software that fits on a computer the size of an iPhone. With input from cameras watching approaching traffic, MARLIN decides on a second-by-second basis which direction to serve. Agility in responding to traffic variations is the key to saving time.

What do you believe is the biggest impact of your research?

MARLIN saves motorists, municipalities and tax payers precious time and money. Based on value of time saved alone, MARLIN would pay for itself in less than a month. In addition, instead of spending millions of dollars on expanding an intersection to reduce congestion, we use smart technology at a fraction of the cost, saving time, money and space.

What are the next steps for your research?

Samah and I are working hard, supported by U of T’s own Connaught Fund, to test MARLIN in the field. We have partnered with PEEK Traffic, a leader in this domain in North America. We hope to partner with willing host municipalities to achieve our first deployment this year, right here at home. Stay tuned for more information.