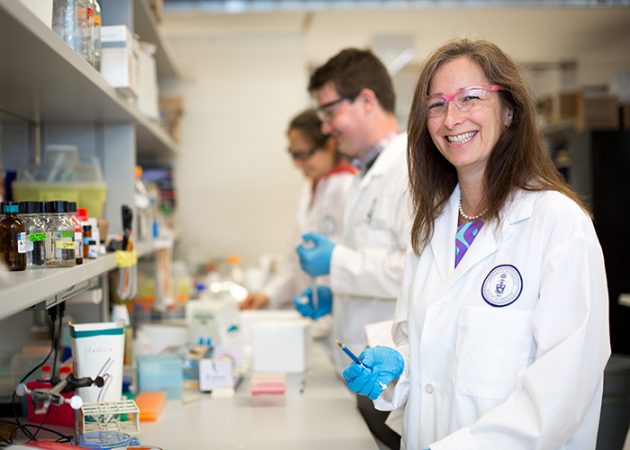 U of T startup raises $3.25 million to eliminate prescription opioids after surgery

January 11, 2019
“If this could obviate the need for people to take opioids in the first place, it would have a real societal benefit,” says University Professor Molly Shoichet (ChemE). (Credit: Roberta Baker)
Human Health

A startup, built on gel-based technology developed in the lab of Professor Molly Shoichet (ChemE, IBBME), has raised $3.25 million to develop a drug delivery system that could eliminate the need to give patients powerful painkillers following surgery – a key source of the current opioid crisis.

The startup, AmacaThera, uses Shoichet’s gel technology to dramatically extend the duration of anesthetics injected at the site of a surgical incision.

That, in turn, means surgeons may no longer need to send patients home with prescriptions for powerful – and potentially addictive – painkillers like OxyContin.

“It’s actually a pretty high percentage of addicts who start taking these opioids early on for surgical reasons,” says Shoichet. “If this could obviate the need for people to take opioids in the first place, it would have a real societal benefit.”

More than half of all opioid-related deaths in Ontario in 2016 involved prescription drugs, according to a study last year led by U of T’s Institute of Health Policy, Management and Evaluation, and the Leslie Dan Faculty of Pharmacy. The same study also found one-third of deaths involved people being actively treated with a prescription opioid.

AmacaThera’s key technology is a gel that can be easily stored and injected at room temperature, but firms up once it enters the body. It has been formulated to deliver commonly used anesthetic drugs to surgical sites and keep them there for two to three days.

By contrast, the same drugs delivered through conventional injections disperse quickly and lose their effectiveness in a matter of hours.

“Right now, drugs are given as a solution, which just won’t stay at the incision,” explains Mike Cooke, who has spent a decade working in Shoichet’s lab and is AmacaThera’s CEO.

“It gets into the blood and washes away into the body. But the gel keeps the pain medication at the site where you need it.”

In the company’s first round of financing, AmacaThera managed to raise $3.25 million from Sprout BioVentures, Viva Biotech and Grey Sky Venture Partners. The money will be used to test and manufacture the gel in a certified lab and complete a Phase 1 clinical trial, which will begin in about a year.

Cooke and Shoichet first hatched the idea for AmacaThera while Cooke was working as a postdoctoral researcher in Shoichet’s lab. At the time, he was using a version of the gel to transplant stem cells, with promising results. The gel had also been formulated into an anti-adhesive barrier to prevent scar tissue from fusing to organs after surgery.

In an effort to maximize the chance of success, Cooke and Shoichet canvassed more than 100 surgeons and anesthesiologists in search of a problem that needed solving, and ultimately settled on drug delivery. Next, they went back to the lab to see if their gel could be reformulated to fit the bill.

“We wanted to do the business-pull model versus the research-push model – and that’s because we’re starting a business, not starting a research project,” says Shoichet, who has been involved in two previous startups based on research from her lab.

The end result was a product with a well-defined market. Another key factor in the decision: AmacaThera’s drug delivery application faces a relatively straightforward regulatory approval process.

“People normally need the product to last a couple of days, not months or years,” Shoichet says. “So the clinical trial is straightforward and the drugs are already in use. It’s a de-risked strategy.”