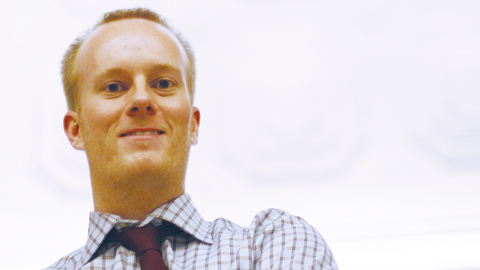 In a paper published in Nature Photonics, U of T Engineering researchers report a new solar cell that may pave the way to inexpensive coatings that efficiently convert the sun’s rays to electricity.

The U of T Engineers, led by Professor Ted Sargent (ECE PhD 9T8), report the first efficient tandem solar cell based on colloidal quantum dots (CQD). “The U of T device is a stack of two light-absorbing layers – one tuned to capture the sun’s visible rays, the other engineered to harvest the half of the sun’s power that lies in the infrared,” said lead coauthor Dr. Xihua Wang.

“We needed a breakthrough in architecting the interface between the visible and infrared junction,” said Sargent, a Professor of Electrical and Computer Engineering at the University of Toronto, who is also the Canada Research Chair in Nanotechnology. “The team engineered a cascade  – really a waterfall – of nanometers-thick materials to shuttle electrons between the visible and infrared layers.”

According to doctoral student and lead coauthor Ghada Koleilat, (ECE MEng 2T8, PhD Candidate) “We needed a new strategy – which we call the Graded Recombination Layer – so that our visible and infrared light-harvesters could be linked together efficiently, without any compromise to either layer.”

The team pioneered solar cells made using CQDs, nanoscale materials that can readily be tuned to respond to specific wavelengths of the visible and invisible spectrum. By capturing such a broad range of light waves – wider than normal solar cells – tandem CQD solar cells can in principle reach up to 42% efficiencies. The best single-junction solar cells are constrained to a maximum of 31% efficiency. In reality, solar cells that are on the roofs of houses and in consumer products have 14 to 18% efficiency. The work expands the Toronto team’s world-leading 5.6 % efficient colloidal quantum dot solar cells.

“Building efficient, cost-effective solar cells is a grand global challenge. The University of Toronto is extremely proud of its world-class leadership in the field,” said Professor Farid Najm, Chair of The Edward S. Rogers Sr. Department of Electrical & Computer Engineering.

Sargent is hopeful that in five years solar cells using the graded recombination layer published in Nature Photonics paper will be integrated into building materials, automobiles and mobile devices.

“The solar community – and the world – needs a solar cell that is over 10 per cent efficient, and that dramatically improves on today’s photovoltaic module price points,” said Sargent. “This advance lights up a practical path to engineering high-efficiency solar cells that make the best use of the diverse photons making up the sun’s broad palette.”

The publication was based in part on work supported by an award made by the King Abdullah University of Science and Technology (KAUST), by the Ontario Research Fund Research Excellence Program, and by the Natural Sciences and Engineering Research Council (NSERC) of Canada. Equipment from Angstrom Engineering and Innovative Technology enabled the research.