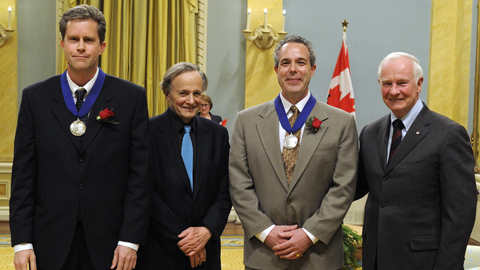 The groundbreaking research of two U of T professors has been recognized with the 2011 NSERC John C. Polanyi Award, which honours an individual or team whose Canadian-based research has led to a recent outstanding advance in the natural sciences or engineering.

Professor Brendan Frey of The Edward S. Rogers Sr. Department of Electrical & Computer Engineering and Professor Benjamin Blencowe of the Terrence Donnelly Centre for Cellular and Biomolecular Research were presented with the award by the Governor General of Canada, the Right Honourable David Johnston, at a ceremony in Ottawa’s Rideau Hall.

Professors Frey and Blencowe were recognized for their research that cracked the codes hidden in DNA that allows a relatively small number of genes to be transformed into hundreds of thousands of variations.

After the initial excitement surrounding the sequencing of the human genome nearly 10 years ago, scientists quickly realized that unlocking its potential would be far more complex than originally thought. It was assumed that humans must have more than 100,000 genes, but only 22,000 were found, roughly the same number as the nematode worm. Clearly, humans can do much more than worms, but how?

Professors Frey and Blencowe, along with their research team including Yoseph Barash and John Calarco, were able to decipher a genetic code embedded in vast expanses of DNA that cells use to control the rearrangement of gene parts in a process called “splicing.” They demonstrated that through alternative splicing, a single gene may do dozens or even thousands of different things, such as control when and where neural connections are made in the brain for learning. So far, the team has discovered hundreds of biological rules embedded in DNA that comprise the ‘splicing code,’ as well as hundreds of examples of splicing that are specific to brain, muscle, digestive and embryonic tissues.

This breakthrough was enabled by taking a radically new approach to this research. Previously, scientists studied one splicing code rule at a time and tried to determine its role. Since the number of possible combinations of rules is larger than the number of atoms in the universe, this approach was impossibly slow. Instead, Professors Frey and Blencowe developed a machine learning framework that can analyze all the rules at the same time by making use of data for thousands of genes, which the researchers generated using custom gene chips.

“This enabled us to combine all the previous discoveries in the field, incorporate vast amounts of new data from Professor Blencowe’s lab, and rapidly assemble a comprehensive splicing code,” said Professor Frey, who is the Canada Research Chair in Information Processing and Machine Learning. He is cross-appointed to the Donnelly Centre and the Department of Computer Science.

“Rules provided by the splicing code are providing us with a fascinating new perspective on how genes are regulated, and this is opening the door to new avenues of research,” said Professor Blencowe, who is also appointed to the Department of Molecular Genetics.

One of the benefits of the splicing code is that it can explain how DNA mutations, which disrupt the normal set of rules, lead to changes in a gene that can result in disease. In new research, Professor Frey and his team are using the splicing code to understand how mutations in a gene cause spinal muscular atrophy, a leading cause of infant mortality, and to predict which of many potential biomolecular therapies are able to correct the problem. Professor Blencowe and his colleagues are using the code to study the molecular basis of biological differences between species and to discover regulatory mechanisms that can be manipulated to improve the generation of stem cells for research and therapeutic applications.