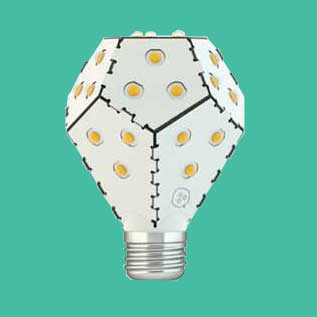 July 22, 2014
Green technology means the new bulb from Nanoleaf will allow users to hit pause whenever the light is bright enough – and it’s still the world’s most energy efficient bulb (Photo: Nanoleaf).
Sustainability

What if you could dim the lights across your entire house without having to buy dimming switches – and save the environment too?

Thanks to the latest invention from Nanoleaf, a startup from U of T Engineering alumni, you soon can.

Nanoleaf, creators of the world’s most efficient light bulb, has released a new dimmable LED bulb that can “transform” any on/off light switch into a dimmable switch. Called the Nanoleaf Bloom, the device is part of a Kickstarter campaign that recently blasted beyond its funding goal in less than two hours.

“In the past, with regular light switches, people had no choice but to use their lights either at full power or completely off,” said Nanoleaf co-founder Gimmy Chu (ElecE 0T6). “With our latest innovation, we not only give people the convenience of having the ability to adjust the brightness without the need for a dimmer … we enable them to save a significant amount of energy.”

The bulb screws into a typical light socket, and it can be dimmed by clicking the light switch on and off in certain combinations. The team estimates the new bulb will cost approximately $1.53 in energy per year.

“One of the coolest parts about our bulb is that at half brightness, it only uses a quarter of the full power,” he said. “At the lowest brightness, the Nanoleaf Bloom only uses half a watt of electricity… and it is still the world’s most energy efficient.”

Nanoleaf was first profiled by U of T in February of 2013. That’s when a Kickstarter campaign for the first bulb from Chu and his co-founders, fellow engineering alumni Christian Yan (ElecE 0T6) and Tom Rodinger (IBBME PhD 0T7), began to draw investments well beyond their original $20,000 goal.

Since then, the team scored influential global funding from the likes of Li Ka Shing (dubbed “Asia’s richest man” by Bloomberg news) while keeping the U of T connection alive, adding three new team members from the university and name-checking the support of President Meric Gertler when speaking with international media.

“I think people are drawn to the high energy efficiency design of our bulb as well as our story – a David vs. Goliath sort of thing – you know, just three entrepreneurs with no funding and just a bright idea,” Chu told U of T News in an article about the global funding.

“We used our passion for efficiency to build a light bulb that was well ahead of the competition. I’m actually surprised that the bigger companies haven’t hit our efficiency rates yet, but sadly I don’t think efficiency is their primary focus.”

Chu shared plans for the dimmable bulb in the U of T News story in March. Now that it’s launched, their latest product continues to rack up Kickstarter funding as they surpassed their original target of $30,000 in less than two hours.

“We want to inspire people to adopt more energy efficient technology into their everyday lives,” said co-founder Christian Yan. “The best way to do that is by making products that are simple and convenient to use.”