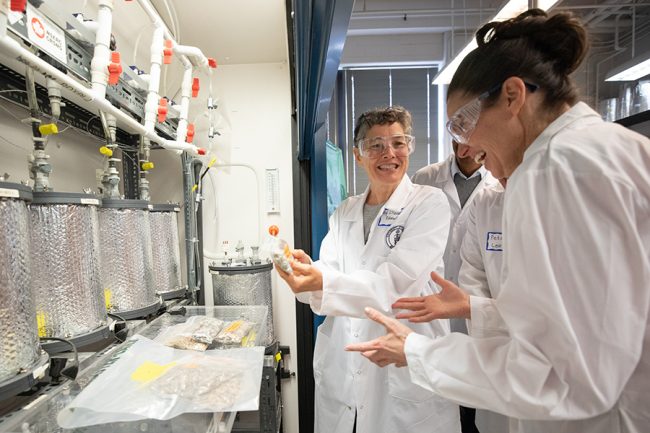 Elizabeth Edwards (ChemE) has been appointed to the rank of University Professor. This is the University of Toronto’s highest academic rank, recognizing unusual scholarly achievement and pre-eminence in a particular field of knowledge. The number of such appointments is limited to 2% of the University’s tenured faculty.

Edwards is a pioneer in bioremediation, a field that applies micro-organisms to degrade and destroy toxic pollutants in soil and groundwater. In particular, her work focuses on chlorine-containing solvents, chemicals used as solvents in dry cleaning, industrial glues and various other commercial applications.

Her lab identified a mix of anaerobic organisms, called KB-1, and showed that adding it to contaminated sites greatly improved the rates of chemical degradation. Edwards’ work has made U of T renowned studying the use of biotechnology based on mixed microbial cultures to reduce the environmental footprint.

In addition to her own research, Edwards is the founding director of BioZone, a one-of-a-kind research and training centre at the interface of engineering, environmental science, and biology at U of T. It is home to more than 100 faculty, students, research personnel and industrial partners with a wide range of expertise.

Since 2014, Edwards has also directed the Industrial Biocatalysis Network, an NSERC Strategic Network, with colleagues from three Canadian universities. Now in its final year, the network has spawned new industry-sponsored initiatives in forest product biocomposites, biochemicals and bioremediation.

Edwards has received several prestigious awards for her research, including a Killam Research Fellowship, an NSERC Synergy Award for Innovation, the Kalev Pugi Award from the Society of Chemical Industry Canada and the Ontario Professional Engineers Medal in Research and Development. She is a fellow of the American Association for the Advancement of Science, the Canadian Academy of Engineering and the Royal Society of Canada. In 2016, Professor Edwards was awarded the Killam Prize in Engineering, Canada’s highest award for engineering research. She garnered the U of T Faculty Award, for excellence in both teaching and research, in 2017.

“Professor Elizabeth Edwards has made exceptional contributions through her own groundbreaking research, her vision and leadership in directing large-scale multidisciplinary research initiatives, and her commitment to developing a cohort of bioengineers uniquely equipped to address our most pressing environmental challenges”, said Dean Cristina Amon. “On behalf of the Faculty, I congratulate her on this richly-deserved honour.”