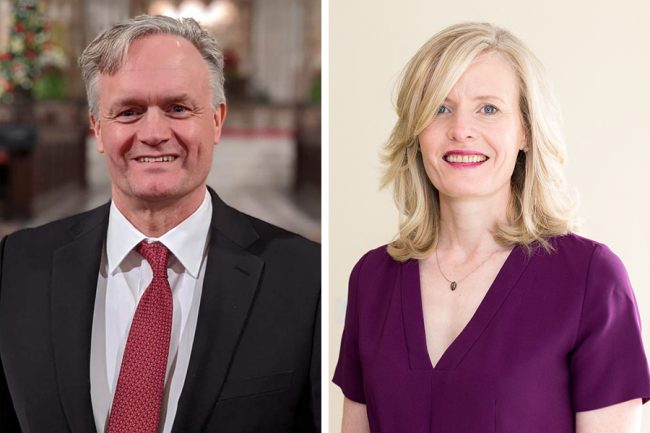 Two members of the U of T Engineering community have been honoured with Engineers Canada Awards, a series of national awards celebrating engineers who have made distinguished contributions to Canada.

Professor William Cluett (ChemE) has earned the Medal for Distinction in Engineering Education, which recognizes an engineer who has made exceptional contributions to the education and development of engineering students and to engineering education in Canada. Alumna Claire Kennedy (ChemE 8T9) has received the Meritorious Service Award for Community Service, presented to an engineer who makes exemplary volunteer contributions to the community.

Cluett is currently serving a three-year term as the Director of U of T Engineering’s Division of Engineering Science (EngSci) and had previously served as Chair of the Division from 2005 to 2011. He has also held several key academic leadership roles in the Faculty, including Vice-Dean, First Year (1997-2003) and Vice-Dean, Undergraduate (1998–2003).

In these roles, he led the development of several innovative initiatives that helped reshape the Faculty’s approach to engineering education. In collaboration with Professor Susan McCahan (MIE), David Kuhn, David Bagley and Pas Pasupathy, he created Engineering Strategies and Practice, a foundational first-year course that leverages the design process to introduce key engineering concepts such as problem solving, project management and communication. He also oversaw the launch of the Da Vinci Engineering Enrichment Program (DEEP), a summer enrichment course for highly motivated high school students with an aptitude for science and math, working closely with Professor Lisa Romkey (ISTEP), Trevor Cuddy and Georgette Zinaty.

As Chair of EngSci, Cluett led the development of a unique major in Engineering Mathematics, Statistics, and Finance. He also oversaw a significant expansion of the Engineering Science Summer Research Opportunities Program (ESROP), which enables approximately 50 EngSci students, both at U of T and abroad, to engage with unique research opportunities each year. These efforts contributed to EngSci winning the University’s Northrop Frye Award for the Integration of Teaching and Research in 2012.

Watch Claire Kennedy (ChemE 8T9) reflect on the importance of community service for engineers and provide advice for early-career professionals.

Kennedy recently completed her term as the Chair of U of T’s Governing Council, which she began in 2017. Her tenure has encompassed major milestones for U of T, including adoption of the Four Corners strategy, and the completion of the Boundless fundraising campaign in 2019, which set a record for Canadian philanthropy.

Kennedy had served on the Governing Council since 2012, starting as a Lieutenant-Governor-in-Council (LGIC) appointed member. She has a long history of engagement with the U of T Engineering community, serving as a member of the Dean’s Strategic Development Council and Campaign Cabinet Executive, member and past chair of the Department of Chemical Engineering & Applied Chemistry’s Advisory Board and member and past president of the Engineering Alumni Network. Her volunteer service to U of T was recognized with an Arbor Award in 2007 and a Malcolm F. McGrath Alumni Achievement Award in 2013.

Kennedy is a partner at Bennett Jones LLP and is recognized as one of Canada’s leading tax lawyers and transfer pricing advisors. She was appointed to the Bank of Canada’s Board of Directors in December 2012 and reappointed in June 2018. She currently serves as the Board’s Lead Director and Chair of its Audit & Finance Committee.

“Professor Cluett and Claire Kennedy are two highly accomplished engineers who have made incredible contributions to the Faculty, to the University, and to the community beyond U of T,” said Christopher Yip, Dean of U of T Engineering. “On behalf of the Faculty, I congratulate them on this recognition — extremely well deserved.”