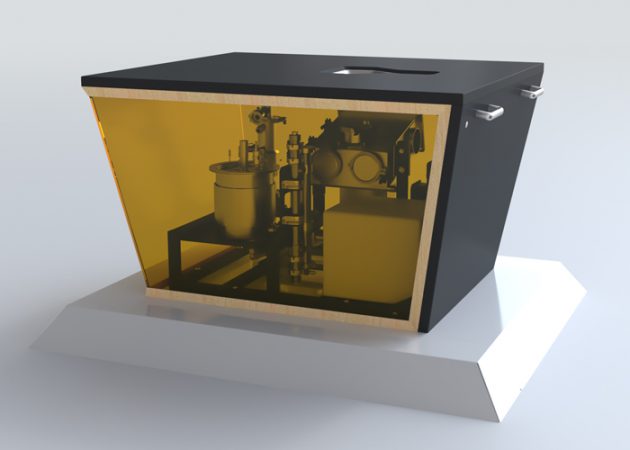 Reinventing the toilet: U of T Engineering team presents sustainable prototype in Beijing

November 6, 2018
This prototype toilet can disinfect household waste at source using minimal water and energy, and is designed to address the lack of effective sanitation and safe waste management in many places around the world. (Courtesy: Yu-Ling Cheng)
Water

Professor Yu-Ling Cheng (ChemE and Centre for Global Engineering) and her team are currently in China exhibiting a prototype with the potential to address one of humanity’s most pressing challenges. They have created a sustainable toilet designed for the billions of people who lack access to effective sanitation or waste management systems.

The team was one of a select group invited to present in Beijing to prospective industry partners, government officials, international agencies, and leadership from the Bill & Melinda Gates Foundation as part of the 2018 Reinvented Toilet Expo.

“Nobody wants to think about what happens after they flush the toilet,” says Cheng. “Unfortunately for many people, a lack of infrastructure leaves them with few options.”

Cheng says that around the world, more than 2 billion people do not have access to basic sanitation facilities. If you include the number of people whose waste is collected, but not safely processed, the total reaches 4 billion, more than half of the world’s population.

In 2011, Cheng and her team took up a challenge issued by the Bill & Melinda Gates Foundation to “Reinvent the Toilet.” They created a system that would treat waste at source, without the need for infrastructure such as sewers, running water or electrical grids. Their first prototype attracted international attention in 2012, and the team has continued to refine the design since.

“We have made a lot of progress since 2012,” says Cheng. “We’re now on our fourth integrated prototype, but some of the individual components have been redesigned more than 15 times.”

The device they exhibited at this week’s Reinvented Toilet Expo has a footprint of 4.5 feet by 2.5 feet, and is 2.5 feet in height.  For the prototype, the processing unit is interfaced to a squat pan toilet design common around many parts of the world.  The user does not have to know anything about what happens below the squat pan — where solids and liquid are separated, solids are dried and smouldered to easily disposable ash, and liquids are heat-disinfected.

The system is designed for the household scale, which provides privacy and safety that users prefer. However, Cheng says that this scale is challenging from an engineering perspective because of slow processing rates, variability in input rates, and the need to make the system easy enough to use for household members.

Energy efficiency is key to the process: heat from smouldering solids is used to dry incoming material. While some energy is still required, the requirement is low enough to be supplied by the 80- to 100-watt capacity of solar home systems used to supply the electricity needs of many households in developing countries.

“If there is an overall theme to our research, it has been to constantly simplify the technology, to make it more robust and easier to use,” says Cheng. “We want to replicate the ‘flush and forget’ experience for users that is the gold standard in developed countries.”

Through various international partners, a testing facility has been built in Coimbatore, India. Their equipment is housed in a building that provides sanitation for construction workers who are working on new buildings on the campus of a local medical college.

“The stalls look like typical squat pan stalls, but below the floor, we essentially have built a lab that contains our processing units,” says Cheng. “We also have access to the college’s facilities for analysis.”

Cheng says that the pilot tests have been extremely valuable, revealing how user behavior and field conditions can lead to failures, and informing iterative improvements. System performance — including mean time between failures — has improved with each iteration.

Through a spin-off company, Sankoya Technologies, Cheng is actively looking for partners who can help adapt the device for mass production and to reach target markets. The Reinvented Toilet Expo is an ideal place to meet such partners, as well as potential customers, says Cheng. The team is also open to partners in “softer-entry markets,” such as remote communities and national parks in developed countries.

The past seven years have been full of twists and turns, but the team feels that they are closer than ever to commercial viability. Throughout it all, they have been constantly motivated by the opportunity to address a challenge with truly global scope.

“We chose to work on a really big problem, and big problems don’t have easy or quick solutions,” she says. “We are part of a global community of people addressing this challenge, and we are close to a viable solution.”