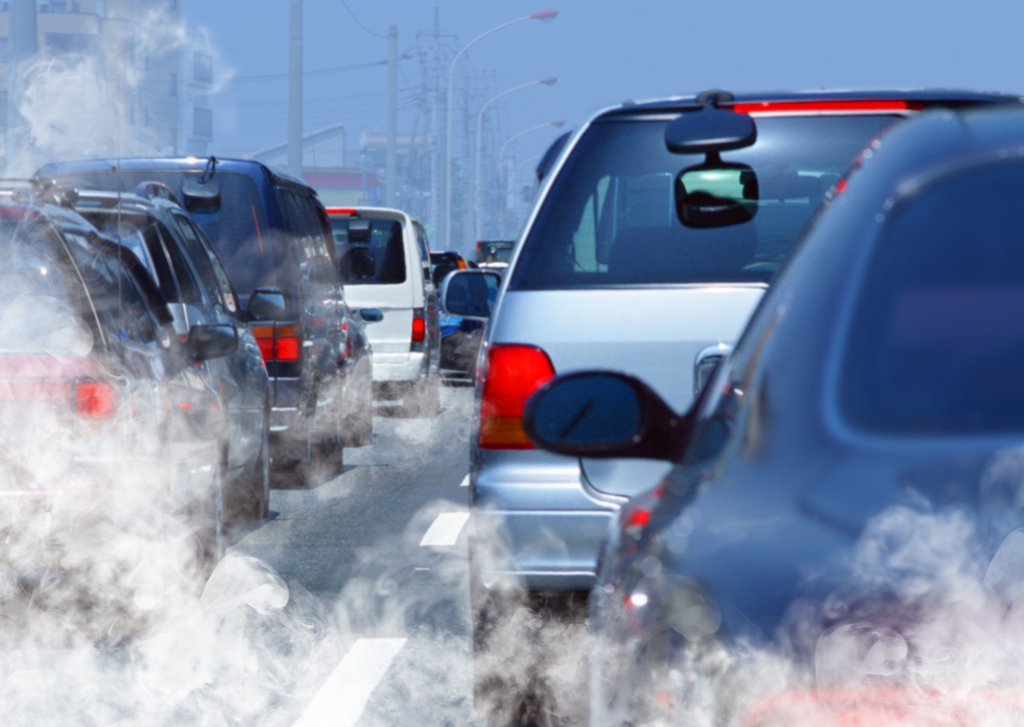 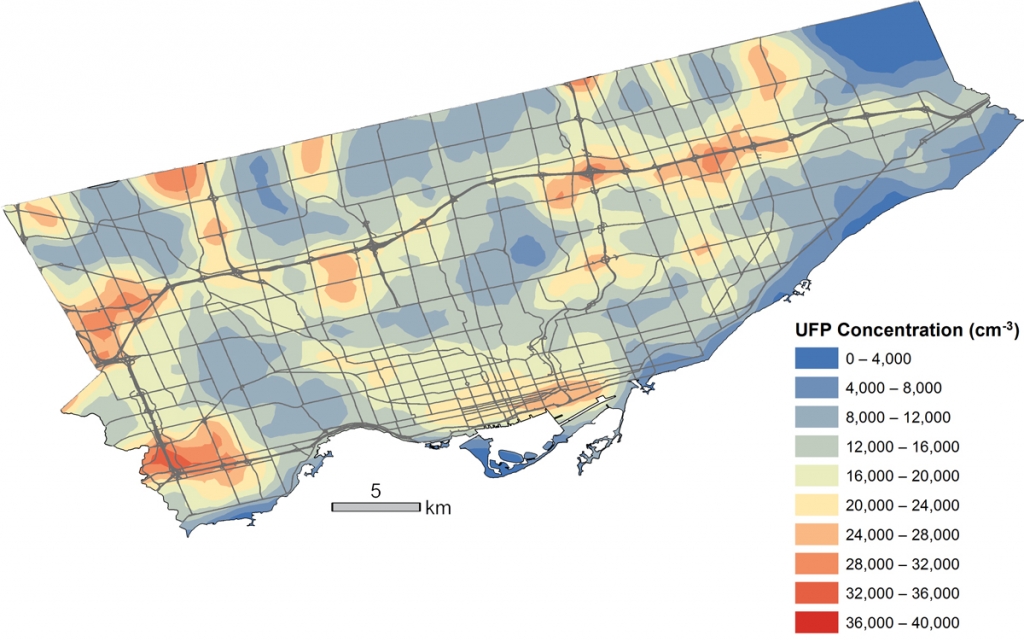 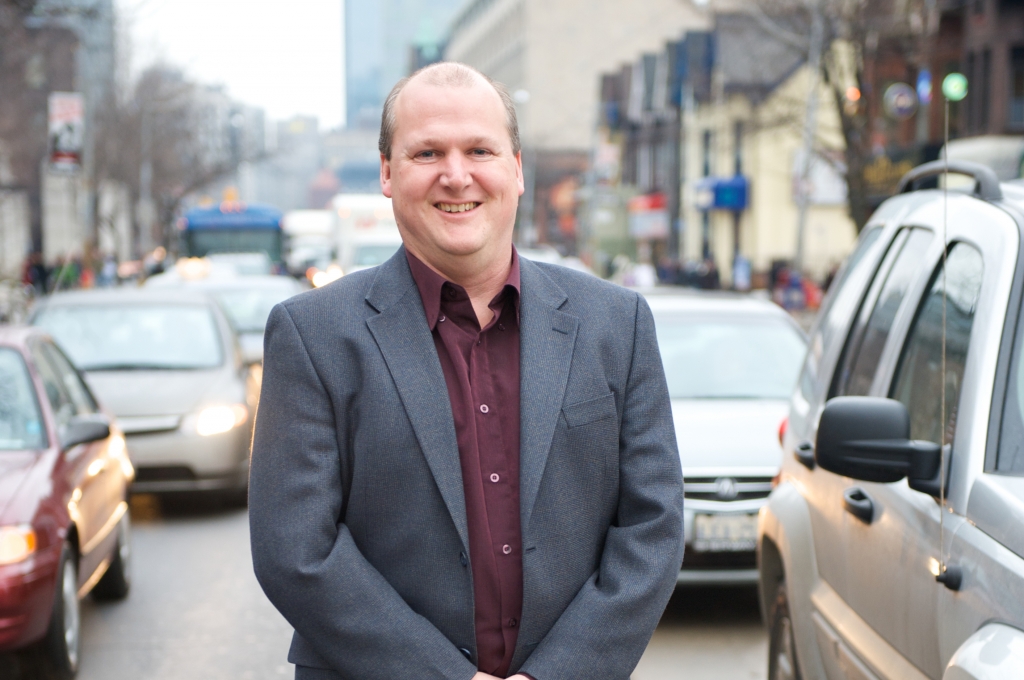 A trio of recently published studies from a team of University of Toronto engineers has found that air pollution could be spreading up to three times farther than thought—contributing to varying levels of air quality across cities.

Past research on air pollution from vehicle tailpipes has shown poor air quality anywhere between 100 to 250 metres of major roadways.

But in a paper published in the recent edition of the journal Atmospheric Pollution Research, U of T chemical engineer Greg Evans (ChemE) and his partners at Environment Canada have found that concentrations of pollutants from traffic are still double at a distance of 280 metres downwind from highway 400 north of Toronto.

One in three Canadians, and half of all Torontonians, lives within 250 meters of at least one major roadway. These roads, says Evans, range from 10-lane highways to most four-lane streets with steady traffic.

“We used to think that living near a major road meant that you lived near a lot of air pollution,” says Evans. “But what we’re finding is that it’s not that simple, someone living right on a major road in the suburbs may not be exposed to as much pollution as someone living downtown on a side street near many major roads.”

In the same study, Evans demonstrated that for somebody living near multiple roads, they could be exposed to up to ten times more pollutants than if they didn’t live near any major roads.

“It used to be that we measured air quality on a regional or city scale,” says Evans. “But now we’re starting to understand that we need to measure air quality on a more micro scale, especially around major roadways.”

According to Health Canada, poor air quality from traffic pollution is associated with a number of health issues, such as asthma in children and other respiratory diseases, heart disease, cancer, and increased rates of premature death in adults. The Canadian Medical Association attributes 21,000 premature deaths each year in Canada to air pollution. A separate study published last month also linked traffic pollution to delayed cognitive development in children.

Lab in a truck

Throughout 2014, the research team travelled the streets of Toronto measuring vehicle emissions from a mobile lab that resembles a Canada Post mail truck.

“One of the aspects of our work that’s unique is that we’re using real-time instruments to make measurements in seconds,” says Evans. “You have to do the measurements right there, right away, or the exhaust will be gone.”

The team’s findings suggest that people living or spending time near major roadways could be exposed to elevated levels of a dangerous chemical brew of ultrafine particles, volatile organic compounds, black carbon and other pollutants.

“The ultrafine particles are particularly troubling,” says Evans. “Because they are over 1000 times smaller than the width of a human hair, they have a greater ability to penetrate deeper within the lung and travel in the body.”

On a typical summer day in Toronto, Evans’ instruments measure approximately 20,000 ultrafine particles in each cubic centimetre of air. This means that for every average breath, Torontonians are inhaling 10 million of these nano-sized particles. These numbers increases to 30,000 and 15 million in the winter, when there is more stagnant air and less evaporation of the compounds.

A second paper by Evans and colleagues, published in the March 2015 edition of the journal Atmospheric Measurement Techniques, suggests that a small number of older or “badly tuned” cars and trucks produce the majority of vehicle pollution.

The study made on-the-spot measurements of 100,000 vehicles as they drove past air-sampling probes of the main laboratory on College Street, one of Toronto’s many major roadways.

Evans and team found that one-quarter of the vehicles on the road produced:

“The most surprising thing we found was how broad the range of emissions was,” says Evans. “As we looked at the exhaust coming out of individual vehicles, we saw so many variations. How you drive, hard acceleration, age of the vehicle\e, how the car is maintained—these are things we can influence that can all have an effect on pollution.”

A vehicle emissions map of Toronto

A third paper, due out in the June 2015 edition of the journal Atmospheric Environment, looks at variations in traffic pollution throughout Toronto, evaluating how exposure to largely unexplored, unregulated ultrafine particles varies across the city. (View the map here.)

Evans is currently working with Environment Canada, the Ontario Ministry of the Environment and Climate Change and Metro Vancouver to design, test and install new air quality measurement stations around the cities of Toronto and Vancouver. These stations will support enhanced monitoring of the air quality health index during this summer’s Pan Am games in Toronto. More broadly, this research will provide a basis for future near road air quality monitoring in cities across Canada so as to get a more accurate portrayal of the exposure of Canadians to traffic pollution.

Evans and team hope that their research may someday lead to policy changes that could help better target the small number of vehicles that pollute the most, as well as to better decide where to build schools, hospitals, daycares, seniors residences and other structures to protect people who are especially vulnerable to air pollution.